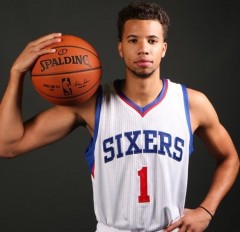 The 2015 NBA Trade Deadline is now just twenty days away.  If between now and February 19th Sam Hinkie decided to pull the trigger on one of the numerous Michael Carter-Williams trade rumors circulating around the League, that would leave Nerlens Noel as the only 1st Round pick taken by the 76ers between 2007-2013 remaining on this roster.  The cold truth is in fact that every Sixers’ 1st Round pick since 2004 has either been traded or cut, but for purposes of this post I”ll only look at the years between 2007 and 2013.

The NBA draft is designed for franchises to improve their rosters with young talent and promising ball players.  A great deal of research, scouting, and film time are put in by team’s front offices and personnel departments to ensure that valuable 1st Round picks picks do not go to waste.   Unfortunately for the 76ers, several trades as well as poor decisions and bad luck in the Draft have left this roster devoid of any 1st Round selections with tenure.

Although it’s a tough pill to swallow, the 76ers are not the only team who has had issues keeping first round draft picks on their roster. For example, lets take a look at the New York Knicks, who as we all know are struggling this year (9-37) and own the same number of wins as Philadunkia’s home team.  Although Phil Jackson may feel differently, the Knicks are in an even worse situation than the 76ers as the “Zen Master’s” franchise has only one first round pick taken by  between 2007 and 2013 on their current day roster.  That player is Tim Hardaway Jr. are the only  to still be on their current roster.  Every other player has either been cut or traded away.

Specifically the blockbuster deal that brought Carmelo Anthony to the Big Apple cost the Knicks. The Knicks sent away a former first round pick in Wilson Chandler (2007; 23rd overall) along with Raymond Felton and Timofey Mozgov to Denver.  In addition they gave Denver their 2014 first round pick.  The Knicks are still feeling the long term repercussions of that deal on their rosters depth. The recent trade with Cleveland that sent Iman Shumpert (2011; 17th overall) to the Cavs did not help this issue in New York either.

Another example is the Minnesota Timberwolves, a team with just two 1st Round selections made between 2007 and 2013 on the current day roster.  The draft picks remaining from this span on this poorly run franchise’s roster are Ricky Rubio (2009; 5th overall) and Shabazz Muhammad (2013; 14th overall).  So the good news is, at least 76er fans can sleep a bit easier at night knowing that they are not alone in this dreaded scenario.  The bad news is, the Knicks and TWolves are among our peers that also boast 1st Round pick deficient rosters.

Still, teams with success in the NBA have stability when it comes to draft picks and draft history.  NBA franchises benefit from young talent acquired through the NBA Draft as the addition of players through the Draft gives a team a deeper roster filled with promising prospects and in some cases trade assets.

With the season of the double tank well under way, it is likely that the Sixers will own a Lottery pick as well as another 1st Round selection at the 2015 NBA Draft.  Thus stability for the franchise should be the thoughts on Hinkie’s come this June.  If 1st Round picks continue to come and go as they did between 2007 and now, nothing is likely to change here in Philadelphia.

Hinkie absolutely needs to hit a home run (or two) in the 1st Round of the 2015 NBA Draft pick and select a prospect (or two) that will be a long term fixture basketball in Philadelphia.  Hinkie needs to draft a player who can make us forget the recent history of suspect draft choices and questionable trades, and at last stabilize a fan base that expects more out of its beloved organization then just struggling to compete night in and night out.