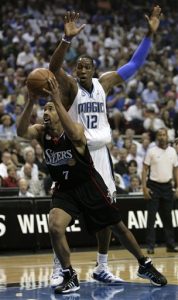 …the 76ers absolutely could have and should have won this game.

To start, the Sixers had balanced scoring as Thad, (20 points), Iguodala (21 points) and Miller (30 points) all had solid nights. On top of that, the Magic shot 6-23 from deep and the refs held Howard to 11 points. That’s a rare off night for BOTH of the Orlando’s big offensive weapons. If you’re the Sixers you HAVE to capitalize on the Magic’s poor offensive showing and win that game.

Additionally, defensively the Sixers did NOT play any where near the level they did in Game 1. If they had, the victory and a commanding 2-0 was there to be had. We would say this L even hurts a little, because again it was within our reach.

The Sixers did not seem to have that gritty, underdog intensity tonight. They did not rebound as well as the did in Game 1 and their defense was borderline “ole” in nature. The Sixers especially could not get a stop when they needed it during the second-half.

Watching Miller and Magic point man Courtney Lee stage a little mono-y-mono was awesome. Lee has a bright future in the League. Miller is very underrated as a scorer, he can fill it up whenever the Sixers need him to get buckets

DiLeo must put something together to stop Lee (24 points in Game 2). You can not keep getting killed by a rookie in the post season unless his name is Derrick Rose.

With 7:04 left in the 2nd Q, Speights hit a bucket and became only the third Sixer to score in the game to that point. Thad and Miller were carrying this team and somehow we were still in the game.

The Sixers had too many turnovers in the first half (we counted 13) andthe Magic converted those turnovers into points. By our count the Sixers did a much better job in the second-half, only turning the ball over three times.

Where was Louis Williams tonight? He hit for four points total (1 bucket in each half) on 2-10 shooting.

In the second half the Sixers were content to settle for the first open jump shot (most of them 3’s) that came along. They did not work the shot clock at all and even when Howard was in foultrouble, they did not look to pound the rock into the paint. That’s not how the Sixers can win this series. We’d liek to see them go at Howard earlier in the game and get him inf oul trouble.

When Howard fouled ut with 3:11 remaining in the game, the Sixers were down by five. The Magic extended the lead to 11 at one point before finally winning by 9. Obviously that scenario can not happen if the Sixers were to win Game 2. Howard’s trip to the pine should have signaled a big run by the Sixers. Instead the Magic pushed the lead out, so give credit to Orlando for winning this one with out Superman.

The Sixers gave up way to many second chance buckets tonight, but none killed them more then the board Marcin Gortat pulled down with 2:27 left in the game. Gortat fed the ball to Anthony Johnson who hit a runner that pretty much put the dagger in the Sixers.

If there was a ray of hope left after that bucket by Johnson, it was extinguished by an awful call on Iggy as he stripped the rock from Hedo as the magic forward drove to the tin. teh call was late as wellas bad and stopped a Sixers breakout for a bucket.