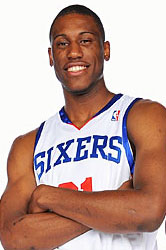 The scene was familiar.  Thaddeus Young sat in front of his locker in a locker room on the event floor of the Wells Fargo Center after a loss.  He had done it many times before.  However, this time, it was different.

There was no name plate above Young’s head at the locker where he sat, and the reclining chair each player is afforded in the home locker room, where they usually conduct post-game interviews from, is absent.

The locker is noticeably empty behind him. When he leaves the Wells Fargo Center, he won’t be able to drive mere miles back home to his wife.  Instead, he has to fly back to Minnesota to prepare for a home game against the Cavaliers.

Still, despite the loss to his former franchise, and his new team’s season-long struggle, Young remained as appreciative as always.

“Did you catch the tribute video* the organization played for you?” I asked Young, before a gaggle of media members made their way over to the multi-faceted forward and former Sixer.

“I caught some of it,” he replied.  “One of my teammates pointed it out to me, and I was able to see some of it during the timeout.”

(The Sixers played the below tribute video for Young, and his seven seasons of service with the Sixers, during a first quarter timeout.)

“It was a great gesture by the organization,” Young continued.  “I wasn’t expecting it.”

Media members then began to leave Nikola Pekovi’s locker and trickle over to Young.

Thad was again asked about the video.

“I think it’s a great gesture on behalf of the team and the organization, and I thank them for it.”

Young was then asked how it felt to lose to his old team, notorious for their recent struggles, twice in the same season:

“These type of things happen.  We’ve just got to continue to play, take it as another game, and move on to the next one.”

Young received a nice ovation upon his introduction to the game, and was generally well-received throughout the evening; a sign of respect from the Philadelphia faithful for Young’s time with the team.  As always, Young had nothing but good things to say about his former team, the city, and its fans.

“I thank the city, I thank the fans, I thank this organization for seven wonderful years.  It’s been amazing, but this is a business, you have to move on.  But like I said, I thank them.”

Thad is correct; players come and go, and like it or not, fans are forced to move on.  But it seems safe to say that those in Philadelphia will remain appreciate of Thaddeus Young and his tenure with the team for quite a while.