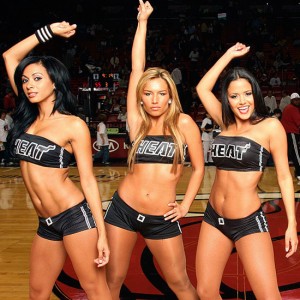 This Monday afternoon edition of “Fo’ with the Foes” – Philadunkia’s advanced scouting series which with the help of an accomplished journalist from around the NBA beat or blog world, previews key upcoming 76ers games – features tonight’s opponent, the Miami Heat who obviously will be without Chris Bosh tonight and have lost 5 of their last 7 games, yet still are still holding on to the 7th playoff spot in the East.

After the jump, I’ll look a Fo’ key items for tonight’s game. Additionally, we’ll get a little more insight into the Miami team the Sixers face tonight from our colleague Brandon Di Perno at hothothoops.com as Brandon will answer Fo’ questions on the Heat from us here at Philadunkia.

1) Isaiah Canaan:  I would like to have seen Canaan take a few less 3PAs in his 76ers debut, but overall I thought he played fairly well — 14 pts. on 5-12 shooting.  While the Orlando Magic’s backcourt is one of the rising duos in the Association, they are not Dwyane Wade and Goran Dragic.  So I will be very interested to see how Canaan handles playing against two All-Star caliber guards in just his second NBA game for the 7-6.

2) Robert Covington’s Stroke:  Yes, Cov scored 16 points and nearly recorded a double-double (9 rips) against the Magic, but he shot 3-9 for deep and he is now 3-14 from deep (21.4%) in the two games coming off the ASB.  Tonight I’d like to see Brown call the new #1 option’s number early and often so that Cov can his stroke back on track.  If #33 falls into a long shooting slump, the Sixers will become unwatchable over the stretch run of Tank 2.0.

3) 76ers to Get a Win on the Road:  I know the Sixers played last night in Orlando and that Philadunkia’s home team has lost 9 straight on the road, but this roster is young and resillient.  The Heat who have lost 5 of their last 7 are not.  Additionally, the Heat are a mess right now.  Thus, I am hoping the Brown & Co. can take advantage of chaos the addition of Dragic and the loss of Bosh have created for Spoelstra on the court and somehow steal a win down in South Beach.

4) Hassan Whiteside:  I actually did a profile on this kid for HoopsTV back when Whiteside was at Marshall and he declared for the 2010 NBA Draft.  Since then I have followed his career closely and I know that it has been a long journey for him.  So I am delighted to witness the success he is having right now (14 & 14 per night over his last 10 games.).  Tonight I am looking forward to watching Whiteside up close for an entire game and checking out just how far his game has come over the last 4 years.

Q&A with our man Brandon Di Perno at hothothoops.com…

Philadunkia:  With Bosh out for the season and Dragic now in a Heat uniform, what are your thoughts on the style of play we will see from the Heat down the stretch?

Brandon Di Perno @ EightPointsNineSeconds.com:  It’s tough to say as Bosh has been a huge part of Miami’s offense for the last four years.  However, this is the first time Miami’s had a traditional point guard and center in a very long time, with that I think they might elect to run a more traditional motion offense.  If that doesn’t occur they might just unleash Dragic, which wouldn’t be an issue.  Spoelstra is a very solid coach so whatever he does, I’m sure it will put the Heat in the best position possible given their recent woes.

Philadunkia:  Can the Heat replace Bosh’s production?  If so, outside of Dragic, how does Spoelstra go about it?

Brandon Di Perno @ EightPointsNineSeconds.com:  For the Heat, this season has been about one door opening and another door closing.  Wade, Bosh and Whiteside have only started 2 games together all season, and every time it looks like progress is being made someone falls victim to injury.  The Heat can’t replace Bosh’s production in its entirety, but with new players in new roles it will be up to some to step up.  Mario Chalmers for example should thrive as a sixth man, and Deng should see an uptick in production with a capable point guard finding him the ball a la Derrick Rose.

Philadunkia:  After the loss on Saturday, Spoelstra said, “It looked like we were strangers out there.  We can fix that.”  But can the Heat get it fixed in time to make the playoffs/ be a threat come playoff time?

Brandon Di Perno @ EightPointsNineSeconds.com:  There’s still a lot of time left in the season, so I’m sure the Heat will figure it out. Spoelstra is right though, in the literal sense.  This new Heat team are strangers to each other, they haven’t played with each other and sometimes a mid-season change like that messes up chemistry.  It’s important to note these players look at each other like family, if Wade’s social media presence tells you anything, it’s that he and Norris were very close.  I personally think the Heat can fix themselves come the postseason, but if they don’t it won’t be a failure.  Miami’s in a great position to compete over the next couple of years.

Philadunkia:  Obviously Hassan Whiteside has played out of his mind for the Heat of late.  He can score, rebound and block shots. What areas of his game still need work?

Brandon Di Perno @ EightPointsNineSeconds.com:  Hassan Whiteside has been a godsend. He is an athletic beast who strikes fear into all of his opponents, and I believe this is only the beginning for him.  There’s not much Hassan can do to improve on his game at this moment in time.  Everything he does fits his role, and he does it very well.  If Whiteside could improve passing the ball and at the free throw line he would be close to unstoppable, but really that’s it.  With Wade being back too, he should only continue to dominate.

Thank you to Brandon for his time and answers.