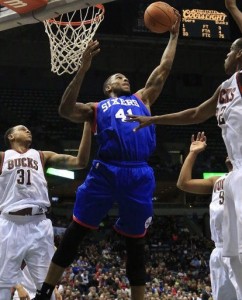 On Tuesday, February 24th, the 76ers officially announced they had acquired forward Thomas Robinson through a claim in the NBA’s waiver wire and confirmed for all of us what the internet had been reporting for nearly 12-hours prior to their release.  Robinson appeared in 32 games for the Blazers this season averaging 12 minutes per game and posting stats of 3.6 ppg. and 4.2 rpg.  In 172 career games, Robinson owns a shine of 4.6 points and 4.4 rebounds per contest.  The Sixers will be Robinson’s fourth NBA stop (Kings, Rockets & Blazers).

Just two Thursdays ago, the Portland Trailblazers traded Robinson, the former 5th overall pick in the 2012 NBA Draft to Denver in a deal that fetched Arron Afflalo in return.  Numerous reports say that Robinson’s agent quickly negotiated a deal with the Nuggets to have Robinson waived because if TRob should clear waivers, a 10-day deal had already been worked out with the Brooklyn Nets.  Of course, that’s where Sam Hinkie entered the picture.

After we learned that this move had become official, my Philadunkia colleague C. Smith texted with one of his NBA front office contacts who works for a Western Conference franchise that previously employed Robinson and the response Smith received read as follows, “No need for xcitement on ur end over this move.”  Another contact who is an NBA advanced scout commented to Smith on the phone, “I know he’s only 23, but I have not seen anything that impresses during his time…(in the NBA). ”  These less than impressive reveiews come from two NBA types my colleague has known for years and who’s opinions he trusts.  To think that one of the young, developing players currently on the 76ers roster could lose minutes to a 2012 Draft bust who over the last 2+ NBA seasons has never averaged more than 6.2 ppg. during any month of his short career (That number was reached just once — March 2014.) is not a good development for the 76ers franchise.

There was also a fair amount of drama surrounding the acquisition of Robinson.  Most of the drama originated from Twitter (especially Nets fans) and centered on the idea that the move was not about basketball.   It was about (in the words of Randy Moss) “straight cash homey”.  We all know that the Sixers needed the sum of Robinson’s remaining salary to reach within 90 percent of the NBA’s salary floor before season’s end – Robinson’s $3,678,360 salary actually pushes the 7-6 over the salary floor.  NBA purists and many online “experts” took to their soap boxes and blasted this acquisition as just another tanking move by Hinkie and in general an embarrassment to the 76ers franchise.

Nearly a week later and depsite what the haters have said or written, I still think the acquisition of Thomas Robinson makes sense for the Sixers as a low-risk, high-reward move.  Robinson was, and remains an intriguing prospect with some obvious upside.  Again, he was the 5th pick in the 2012 based off of the athleticism and ability he showed at Kansas, and at 23 years young, there remains for Robinson to tap into that yet unrealized potential.

He is an energetic an fierce player who attacks the glass, and has the strength to finish around the rim, even in the midst of other bigs. He has a high motor, and plays with a nasty edge out on the hardwood.  This was evident in his debut with the Sixers last Wednesday, as he finished with 7 points and 6 rebounds – all collected from his efforts around the rim.  Over his next two games in a 76er uniform, TRob has averaged 9 points (Despite shooting just 6-18 from the field — 33%) to go along with 9 boards per night.  I know it is a small sample size on a tanking team, but so far, Robinson has been a very solid pickup by Hinkie.

Robinson is limited offensively, and may not have the highest basketball-IQ, which may have contributed to the fact that he has been tossed around to four franchises already in his short stint in the NBA.  Robinson also has never had ample opportunity to contribute on-the-court, something he might get with the Sixers.  He will likely never be a starting-caliber forward, but it will be Brett Brown’s task to see if he can turn him into a consistent contributor, that could potentially hold a reserve role, or at least be flipped for some value down the line.  It doesn’t hurt to take a cheap look at a potential talent, especially one that is just three years removed from being the fifth overall pick in the NBA Draft.