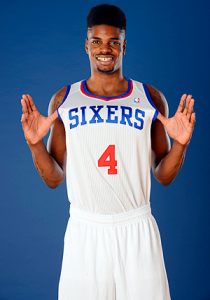 Lost in the wake of all the Eagles free agency news this weekend was the fact that the 76ers went produced a 1-1 record in their last two games (Win over the depleted Atlanta Hawks) and rookie Nerlens Noel who has played extremely well since the All-Star break, simply took his game to another level this past weekend.

Since the All-Star break, Noel has played his best basketball of the season.  Since the festivities in New York City wrapped up, #4 is averaging 11.8 points, 10.0 rebounds, 1.7 assists, 2.9 blocks, and 2.7 steals per game.

Over the weekend, Noel averaged 10.5 ppg., 14 rpg. and 5.5 spg.  As a result of his two impressive outings, a host of “historical” references were applied to the stats Noel has been posting during this recent stretch of play and posted online.  After the jump, we’ll present a several of those references and let you decide what, if anything, these numbers exactly mean for Noel and the 76ers.

Obvioulsy statistics can be be massaged and/or combined to portray just about any message the compiler want readers to see and the sample size (10 games) is small, so I am not going to get crazy excited about Noel’s recent play.  However, I’ll be the first to admit that Noel is producing at a much higher level than I ever expected from him in his rookie season.  I still view him as a raw prospect and I am not sure he will ever become a franchise level player, but I tip my cap to him for his recent surge in play and I’m very curious to see how long Noel can remain at this level.