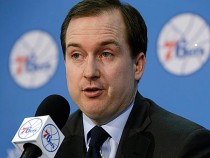 The 76ers will finish the 2014-15 NBA season with a record nearly identical to the one that they posted in 2013-14 – their first year under Head Coach Brett Brown and GM Sam Hinkie. The similarity in total wins and losses does not mean that there was zero progress from the first to second season under this regime.  It just means that the progress has yet to be reflected in the wins column.

In actuality, the Sixers are substantially further along in their rebuilding process at the end of the second season with Hinkie at the helm than they were just eleven months ago when current Milwaukee Buck, Michael Carter-Williams was named the league’s Rookie of the Year.

Last season’s nineteen wins, which were accumulated with the help of veterans – Evan Turner, Spencer Hawes, LaVoy Allen, and Thaddeus Young – who had no future with the franchise, felt empty.  Wins this season on the other hand were achieved by young, developing players, brought in by Hinkie himself, eager to show that they had a place in the ‘plan’ moving forward, or at least belonged in the league at large. Thus, this season’s wins felt rewarding, even at times exciting, as they were the direct result of hard work and development from guys that could potentially help to build the team back into a contender.

Instead of having to dedicate major minutes to guys he had inherited like last season, Hinkie was able to use most of 2014-15 to develop drafted players (Luc Mbah a Moute saw nearly 30 minutes per game as the lone on-court veteran presence) and test out young acquired talent in order to evaluate for future fit.

While not every prospect panned out for the franchise (sorry, K.J), the approach has paid off, as the team has been able to identify several potential pieces for the future. Robert Covington is a legitimate offensive option.  Jerami Grant is developing into a multi-faceted forward who can contribute in a multitude of ways.  Thomas Robinson, JaKarr Sampson, Tony Wroten and Ish Smith make for interesting potential bench options, and let’s not forget about the eventual addition of draft selections Dario Saric (10 ppg. & 5 rpg. for Anadolu Efes Istanbul) and Jordan McRae (21 ppg. in Australia’s NBL).  A lot of these guys were afterthoughts elsewhere, but have been afforded an opportunity under the Sixers’ rebuilding route, and have taken advantage of it. With so many minutes tied up in soon-to-be-moved veterans last season, the team was not able to identify potential pieces at the same rate as it did this year.

One of the biggest beneficiaries of the ample on-court opportunity afforded by the Sixers desire to develop has been prized pick Nerlens Noel, who has blossomed from a somewhat passive player early in the season to a dominant defender and potential star-to-be.  Noel has been magnificent on the defensive end of the ball and is making huge strides on the offensive end.  Although he is in the top 10 league-wide in both blocks and steals per game, Noel’s most important statistic may be the fact that he has missed only four games this season after being sidelined for the entirety of his rookie campaign.  His durability has been an enormous relief, as he has established himself as a true building block for the franchise.

In addition to identifying and developing some young core pieces, the Sixers also took several steps forward in ’14-15 in terms of establishing a defensive identity and style of play.

Despite consistent player turnover and a perceived lack of talent Brett Brown’s Sixers have a borderline top 10 defense (currently ranked 11th) as a result of paint protection, turnover generation, and good old fashioned effort.  They lead the League in steals per game as a team, and are second in blocks and total turnovers per game.  Much of the team’s development on defense can be attributed to Noel’s presence in the paint, as the former Kentucky Wildcat has been holding opponents to an impressively low 45% from the field at the rim, and has improved rapidly as a help defender.  But the team as a whole is long and athletic and they play hard night-in and night-out; a testament to Brown’s ability to motivate his team and to get them to tune out outside noise.

On the other end of the floor, the Sixers project as a team that will look to get out in transition, spread the floor, and attack the rim. Much like with Hinkie’s former franchise in Houston, a premium will be placed on points in the paint and beyond the arc attempts. By moving Michael Carter-Williams, a guard who can do a lot on the floor but is a poor shooter, the team emphasized the import of shooting and floor-spacing.  With two consecutive lottery picks used on premier post players in Noel and Joel Embiid, such an approach makes sense, as reliable shooters will be needed to keep the defense from packing the paint.  The Sixers’ emerging style is in keeping with the league-wide shift toward small-ball and floor-stretching.

There is still a myriad of questions facing the Sixers this offseason, none looming larger than the health and potential of prized pick Embiid, who like Noel before him, has missed the entirety of his rookie season recovering from an injury issue.  Still though, with up to four potential first-round picks in the 2015 Draft (Unfortunately those extra picks seem to be slipping away with each passing day.), several promising pieces already in tow and plenty of financial flexibility, the Sixers are setting themselves up for success.  With each potential piece identified and each dominant defensive display, Hinkie’s vision for the franchise becomes slightly clearer. Their final record may not indicate it, but the Sixers took some solid steps forward during the 2014-15 season.