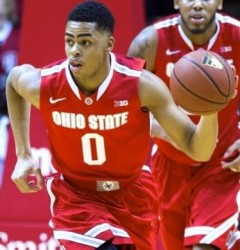 While the entire city of Philadelphia is focused on the NovaCare Complex and whether or not Chip Kelly can swing a deal for his boy Marcus Mariota, we thought why not take a quick peek at the 2015 NBA Draft and what the 1st Round could hold for our 76ers.

We don’t know yet what will happen in the NBA Draft lottery in May, but we know there are decent odds the Sixers will end up with a pick in the top four of the Draft, and from there the pressure is on Sam Hinkie.   Now that D’Angelo Russell has declared he will leave Ohio State and has joined Emmanual Mudiay (Guangdong of the China Basketball Association) in the draft prospect pool, it appears to be a two-horse race for what is an obvious position of need for this franchise — point guard.

According to most of the television/online “experts” as well as a couple NBA front office executives I texted with, both Russell and Mudiay are franchise players, and it is likely both will be available by the time the 76ers are on the clock.  Additionally, current 2015 Draft props at NBA sportsbook topbet.eu list them as near-equal long shots to slip in ahead of Karl-Anthony Towns and Jahlil Okafor as the No. 1 overall pick.  So, if both are available when the Sixers are ready to pick, which young lead guard fits the style of team that Hinkie and Brown want put on the floor in 2015-2016 and beyond?

In terms of the numbers, it’s hard to find much in the way of an edge between them.

Mudiay (6’5; 200 lbs.) remains something of a mystery, having played only 9 regular season games during his year in China and spent significant time on his team’s injured reserve list (severe ankle injury).  However he did return to ball in 3 playoff games for Guangdong.  In one game Mudiay came off the bench, played 34 minutes, poured in 24 points, grabbed 8 boards and tallied 4 assists.

The dynamic scorer with a streaky jump shot averaged 18.0 points, 6.3 rebounds, 5.0 assists, and 1.6 steals while in China.  According to draftexpress.com, “Mudiay’s Chinese adventure went about as well as anyone could reasonably expect considering his age, lack of experience, and the incredible pressure of playing for a championship contending team in one of the least patient and rational basketball environments on earth. There are very few 18-year olds on the planet who are equipped to handle a situation like this, and all things considered, he certainly did not disappoint.”

Still, the NBA front office executives I have spoken with note that they will be relying NOT just on what Mudiay did in China to assemble their scouting profiles.  Mudiay’s high school days at the now closed Prime Prep (TX), his time on the grassroots / summer circuit with Texas Select and Mo Williams Elite as well as his performance at the 2014 Nike Hoop Summit will all be taken into consideration by scouts and NBA personnel execs as they attempt to determine how great Mudiay’s upside is at the next level.

On the other hand having played numerous times on national TV, including two games in the 2015 NCAA Tournament and having been named a first team All-Big Ten player as well as freshman of the year; Russell (6’5; 180 lbs.) is significantly less of a mystery.  Like Mudiay, Russell can score the ball (19 ppg.) and will need time to develop the other facets of his game in order to reach his full potential. However, even at this young age he is considered to be a very polished player with a smooth jump shot (44% on FGAs), excellent footwork and high basketball IQ.  Russell’s potential is frequently labeled as sky high.   Russell shot 41% from beyond the arc for Ohio State this past season, got to the charity stripe 4.5 times a game and is extremely unselfish (5 apg.).  Those are three items that have become very integral to the 76er’s space and pace-driven offense.

All told and even though Hinkie will likely end up with only one pick at the 2015 Draft, the 76ers should feel fortunate in how the draft is slotted favorably for their needs. In theory, Hinkie will be picking between two fine guards prospects come June, either of whom has the ability to lead this franchise for years to come.

While a number of “experts” are currently predicting the 7-6 to select Mudiay, if it were up to this scribe, NBA Commissioner Adam Silver would be calling D’Angelo Russell’s name at the Sixers’ draft slot.