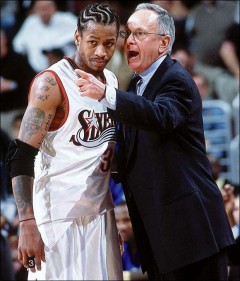 In case you missed it live at 8:30AM-ish on 97.5 The Fanatic, or have not been following Twitter over the last couple of hours, former 76ers coach and current SMU head basketball coach Larry Brown joined Fanatic hosts Anthony Gargano and John Marks this morning.

Brown was his usually high energy self (sarcasm here) as he discussed the 2015 NBA Draft, former SMU prized recruit Emmanuel Mudiay and De’Angelo Russell as well as our 76ers and what Sam Hinkie should do at this June’s draft.

However we think it’s Brown quotes on that June day in 1998 when he drafted Larry Hughes and 76ers fans in general that you will find most entertaining.

On drafting larry Hughes instead of Paul Pierce, Brown said…

“”We took Larry Hughes because (with the eighth pick) because we thought we had a need,” he said. “But the reason we took Larry is I promised him when we interviewed him — we knew we were getting the eighth pick — I promised him if he was there at (No.) 8 we would take him. We actually had Paul Pierce ranked 2nd on our board that year, but promised Larry Hughes we’d take him at 8.”

The coach then added, “I would never do that again.”

— I have no words to describe my reaction to this statement.  If the words are true, it’s the most ridiculously ignorant draft strategy I have ever heard of in my time covering the NBA.  If the quote is false and ol’ man Brown is just saying that as an excuse for drafting Hughes and missing out on Pierce, well then it’s just cruel to 76ers fans who lived through the “Larry Hughes can play point guard” era.

On 76ers fans and Philadelphia sports fans in general…

“..there’s no more loyal places I’ve been than Philly & I’ve been all over.  They’re tough on visiting teams and that’s okay.”

— Maybe Larry should have shown us some loyalty instead of stabbing Ed Snider in the back in May of 2003 when Brown resigned as the 76ers head coach for health reasons and because he felt the franchise needed a “fresh look” at things.  Of course we all know that after his resignation, he soon signed on to be the head coach of the Detroit Pistons.

Overall, the Brown interview is a very piece of sports radio and you can listen to the entire interview here.