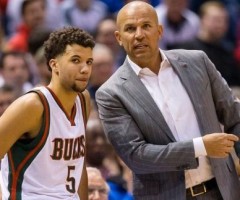 Michael Carter-Williams has had an interesting start to his NBA career.  He was the main attraction on an under-talented, up-tempo Sixers team his rookie year, and the unbridled opportunity provided for him to put up stats on that squad led to him being selected as the League’s Rookie of the Year.  Despite the accolade, the Sixers were never completely sold on him and his trade to Milwaukee was simply confirmation of such a fact after months of speculation that dated back to the 2014 Draft.

Whether or not Carter-Williams could have eventually thrived on a contending Sixers team is a moot point at this point, as he is now the playing for Jason Kidd and the Milwaukee Bucks.  Heading into his third season in the League, and his first full season with the Bucks, several questions still surround Carter-Williams and his ultimate potential as an NBA player.  The upcoming season will be huge for the former Sixer in terms of establishing himself, and demonstrating exactly what kind of player he can be in his career moving forward.

During his Rookie of the Year campaign in 2013-14, Carter-Williams led all rookies in points, rebounds, and assists per game; an impressive feat. He also led all rookies in turnovers however, and shot an underwhelming 40% from the field. During his second season, a time when improvement is often seen, his stats stagnated. His points and rebounds per game dropped, and his field goal percentage slipped below 40%. His turnovers also increased from 3.5 to 3.8 per game.

In Carter-Williams’ defense, he has never really had any opportunity to improve upon and work on his game extensively since he entered the league; he underwent shoulder surgery shortly after his rookie season ended that sidelined him for the entirety of the offseason. This will be his first full summer to work. It is easy to point out that he could have used last summer to work on his shooting stroke — the most glaring weakness in his game, but he simply didn’t get the opportunity. So, at this point, the verdict is still out on if Carter-Williams can become a serviceable shooter; a necessary development to his game that would expand it exponentially.

That is why next season is so important for Carter-Williams: Very few point guard have found solid success in the league, especially in a starting spot, without at least a semi-reliable jump shot to open up the offense and keep the defense honest. Rajon Rondo during his days with the Celtics is an example, although he was unable to duplicate that success in Dallas; largely due to his inability to shoot consistently bogging down an otherwise high-octane offense. Carter-Williams’ current coach, Jason Kidd, is a success story for the young Syracuse product to follow, as he started his career with a similar skill set to Carter-Williams, complete with a shaky shot and all, but developed into a reliable shooter over the course of his career. Kidd is fifth all-time in three-pointers made.

Carter-Williams still has time to add a shot to his offensive arsenal, and he will likely benefit from a full NBA offseason to work on his game, but the clock is ticking. The NBA is chalk full of dynamic point guards right now, arguably more so than it has been at any other point in time. New talent is filtering in annually, and teams can only be so patient in waiting on development from one individual. In Carter-Williams’ case, that development will manifest itself in the form of improved decision-making and a more consistent shot. He also needs an enhanced dedication to defense.

The Sixers were arguably not patient enough with the young guard, but in the coming season it will be up to Carter-Williams to show the Bucks – who will eventually have a decision to make on him – and the league at large, that he belongs in the discussion with some of the other great young point guards.

Carter-Williams has a unique skill set, and will be in the league for years. He posses excellent size, can rebound well for his position, push the ball, and he has excellent court vision. The question is just how good he can become. Will he be the starting point guard on a contending team (the Sixers apparently didn’t think so, and it was tough to glean anything from his time with the Bucks this season as he only played in 25 games with them),or will he be better suited in a reserve role where he can come in and contribute (he has drawn some comparisons to Shaun Livingston)? He has shown flashes of an ability to be the former, but without consistency, he is destined to become the latter. The opportunity is his, and the 2015-16 season will be an important stage for him to solidify his spot among the League’s premier point guards.