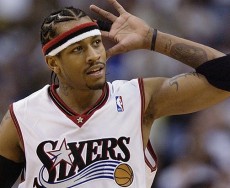 One way or another, the 76ers will continue to add to their young core in this summer’s NBA Draft.  Depending on how the ping-pong balls bounce in the upcoming Draft Lottery, the Sixers could own as few as one or as many as three 1st round selections at the 2015 NBA Draft.  The organization obviously needs a lot of luck in said Lottery.

After the news broke that Julius Erving, who represented the team at last year’s Draft Lottery, was unavailable to attend this June, the team announced that Nerlens Noel would be taking his place.

I love Nerlens Noel, and was beyond impressed with his development throughout his rookie season.  I think he has great things ahead of him in his NBA career, and I legitimately believe that he will compete for, if not win, multiple Defensive Player of the Year awards. With that said however, I would have preferred the team to send Allen Iverson.

Who is more beloved by Sixers fans, and the Philadelphia faithful at large, than Allen Iverson?  The man sells seats just by attending a game!

Fans flock to the Wells Fargo Center during A.I.-themed nights, and for his part, Iverson’s seems genuinely interested in the fortunes of his former franchise.  He has talked at large about the bond that he has with the city and its people, as they always appreciated his hardhat-approach.  The fan base would certainly support Iverson’s attendance, as his number three jersey is still more frequently sighted at the Wells Fargo Center than Noel’s number four.

Noel is destined for great things with the 76ers – but he hasn’t accomplished them yet.  I know I’m just being picky, but I would prefer an individual with deeper ties to the organization.

Only three other teams of the fourteen lottery teams are sending player representatives.  The Hornets are sending Michael Kidd-Gilchrist, Alex Len will be attending for the Suns, and somewhat surprisingly, the NBA’s leading scorer, Russell Westbrook will represent his team, the Oklahoma City Thunder on stage.

Iverson, the franchise’s last first overall pick, was the catalyst behind the team’s most recent successes.  The greatness of Game 1 of the 2001 Finals is still common conversation in Philadelphia barbershops, as fans itch for the team to return to such prominence.  No player since Iverson has resonated with the fans and the city to the same degree; his attendance on behalf of the team he carried for over a decade just seems like it would have been fitting.  Plus, it would be nice to have someone sit on the stage that Hinkie can’t trade at next month’s Draft. (Not that Hinkie would trade Noel, who is so clearly developing dominance, unless *the right* offer came around).

Not to mention, it would have been entertaining to see what type of outfit the man famous for baggy white t-shirts, over sized khakis and doo-rags would wear to an event that has seen its fair share of bow-ties in recent years, and will now be exposed to whatever Russell Westbrook has in store for it.