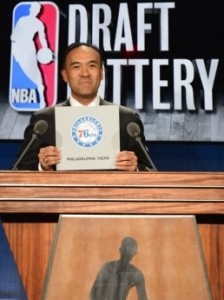 The 76ers didn’t walk away from the 2015 NBA Draft Lottery with a slew of first round selections.  Hell, they didn’t even end up with the No. 1 overall pick in the 2015 Draft.  Nope, the Timberwolves won the lottery last night, marking the first time since 2004 that the team with the worst record earned the No. 1 pick.  The hated Lakers finished second which made Magic Johnson giddy on Twitter.

In the end, the 76ers could not defy the odds and finished third last night in New York.  Sam Hinkie described the scenario as a, “a good outcome”.  That certainly is one way to describe the events of last night, but it’s not enough for the scribes here at Philadunkia. When you go from the long-shot dream of “One. Six. Eleven.” to the reality of having the third pick in the 2015 NBA Draft, a few more words are necessary.

After the jump, our reactions to last night’s Lottery outcome.

Michael Kaskey-Blomain:  As opposed to last year’s draft, where I desperately wanted the Sixers to land the top pick, and in turn Andrew Wiggins, having the third selection spot in the 2015 Draft is pretty solid for the Sixers. The team will have their choice of remaining top-5 talent, and will be in position to select the best available player.

D’Angelo Russell seems to be the player everyone is abuzz about for the Sixers, and for good reason. The kid is a stud, and could develop into a primer point guard in the league; a position that the Sixers need to fill with Michael Carter-Williams no longer in tow. Russell is quick and athletic, with the ability to pass and shoot. Thus, he projects to fit well on the court next to Nerlens Noel and Joel Embiid, who attended the same high school as Russell. Hinkie and co. still have over a month to mull over potential options, but if available, Russell seems like he would be a great fit, and an excellent addition to the Sixers’ young, developing core. The prospect of landing a young talent like Russell is intriguing, as long as you ignore the team’s recent history with lottery picks from Ohio State (What’s up, E.T.?).

If Russell is unavailable at the time of the their selection, there will still be other high-caliber options for the Sixers to select. Mystery man Emanuel Mudiay has potential, and Justice Winslow could develop to be an excellent perimeter player; another area that the Sixers need to address. It is likely that both Jahlil Okafor and KAT will be gone before the Sixers select. If not, the team will have further options to consider.

Obviously it would have been nice for the team to land 1-6-11, but that was always unlikely. This way, despite not getting multiple lottery picks this year, the team will have a steady stream of talent coming in for the next couple years. Embiid and the third overall pick will be added this summer. The Lakers pick is only top-3 protected next season, and likely to transfer. So the Sixers will have that to couple with their own pick and the possible arrival of Dario Saric next summer. The Heat and Thunder picks will eventually convey as well. In this way the Sixers can continue to infuse new talent into the team, while developing the guys they already have.

You also can’t count out the possibility of Hinkie making a move to acquire another lottery pick, as there are reportedly several available. The team also has ample cap space to spend. This summer should be a busy one for the Sixers.

Jeff McMenamin:  In one word: relieving. I wanted no part in the No. 1 or No. 2 picks in the upcoming draft. I didn’t want to go through the stress of trying to figure out whether or not Sam Hinkie was going to draft Karl Anthony-Towns or Jahil Okafor, whether he was going to ship Nerlens Noel out of town or whether the Sixers would even be able to trade down to use their pick on an actual position of need.

Getting the third pick has my eyes dead set on D’Angelo Russell and really I’ve had my eyes set on him immediately following Michael Carter-Williams’ departure. My only worry comes if the Timberwolves draft Okafor at No. 1. The Lakers would have to decide if they add Towns, when they already have Julius Randle at power forward, or if they go for a top guard prospect instead. This would make the upcoming draft very terrifying for Sixers fans and it’s a scenario that’s still not out of the question.

C. Smith:  For me it was a very disappointing result last night in NYC.  Unlike many on Twitter yesterday, I was not clinging to crazy hopes of a “One. Six. Eleven.” Sweep for the 76ers.  However, I did hold firm to the belief that the Sixers could move up into the No. 1 slot and open up a world of maximum “optionality” for our man Sam Hinkie.  That certainly would have made for a significantly more entertaining Draft night on June 25th, 2015.  Imagine the possibilities of Hinkie sitting at No. 1overall and simply fleecing a team who was looking to trade up.  A scribe can dream.

The tremendous silver lining to landing at No. 3 is that the Sixers are almost 100% locked into D’Angelo Russell at that spot.  Since the end of March Madness and maybe even before then, Russell is the player I have wanted the Sixers to add at the 2015 NBA Draft.  Now that is highly likely to happen and I am loving that idea.  One NBA front office executive I texted with described Russell as, “a no-brainer for your 76ers. It’s like he was developed to play on that team.”  Now I know there is always a possibility that Hinkie could go rogue and make a deal for future assets, but I hope he sticks with conventional wisdom this time around. 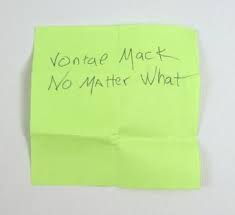 Have you seen the movie “Draft Day”?  Do you recall how Kevin Costner’s character (GM of Cleveland Browns) carries around a green Post-It with “Vontae Mack…No Matter What.” written on it?  Well, I will be slipping a similar piece of paper into Hinkie’s pocket regarding D’Angelo Russell.

Lastly, landing at No. 3 in Draft15 means that the Sixers are virtually guaranteed to receive the Lakers protected 1st round pick in 2016.  With Kobe and Julius Randle healthy as well as the addition of the No. 2 overall selection at this year’s Draft, it’s hard to believe that the Lakers will finish at the bottom of the NBA standings next year.  Thus their 2016 1st rounder will convey to the 76ers.