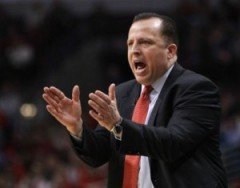 The Chicago Bulls fired Tom Thibodeau with authority on Thursday, saying that a change at the head coaching position was necessary because Thibodeau was behind a “departure” from an “organizational culture” that is responsible for the Bulls success on and off the court.

Whatever the reasons for his firing, after five straight playoff appearances, Thibs is no longer the hea coach of the Chicago Bulls. For us here at the Philadunkia offices the news made us think back to two posts by Philadunkia scribe Jeff McMenamin on the topic of Thibodeau and the 76ers’ head coaching position.

In a post by McMenamin that dates back almost 6 years to the day (5/21/09), he wrote that then 76ers GM Ed Stefanski had met with Thibs who at the time was the Boston Celtics associate head coach.  At the time of the interview, the Sixers roster boasted Andre Iguodala, Elton Brand, Samuel Dalembert, Louis Williams and Thaddeus Young and McMenamin noted…

“If the Sixers look to go beyond the first round of the playoffs next season than they must start with defense. There is no better way of improving your defense, than by getting a coach who is highly regarded for his ability to design and teach tough defensive schemes. Thibodeau has seen every offensive set in the books and knows how to react to each of them defensively. If Thibodeau’s coaching was compared to a chess player, he would be the late chess legend Bobby Fischer. Like Fischer, Thibodeau has been around so long that he knows how to counter every move. If the Sixers hope to put teams in checkmate on defense next season and take that next step toward and NBA title, than Thibodeau is their man. ”

In the end, the 76ers hired Doug Collins and we all know how well that ended…

Flash forward to May of 2013…in the wake of the Andrew Bynum disaster and the eventual departure of Collins, the 76ers organization is an absolute wreck.  As McMenamin wrote at the time…

Obviously it’s a giant and probably ignorant leap to say that the 76ers would have contended for the NBA title had Thibodeau been hired as the head coach back in 2009.  However, we think it is safe to say that Philadunkia nation wouldn’t have had to live through back-to-back seasons of tanking had Stefanski gone with Thibs back in ’09.