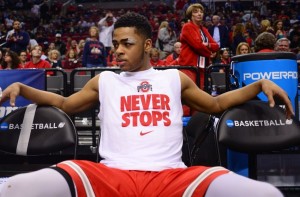 Last week Los Angeles Lakers Head Coach Byron Scott made the following comment on the Jim Rome show,  “Obviously in this draft, you got two great bigs and you got a great point guard in Russell, as well. We got to wait and see what Minnesota does.  So we are going to do our due diligence to bring them in and work them out and go from there.”

That one little quote regarding our favorite 2015 Draft prospect nearly gave all of Philadunkia nation a heart attack and of course set the Internet on fire with ‘The Lakers like Russell’ rumors.  It also got the scribes at Philadunkia thinking, what if Lakers do in fact decide to solve their point guard issues through the Draft (Russell) instead of free agency?

What is the Sixers move if Russell is gone when Sam Hinkie is on the clock?

Jeff McMenamin:  If the Lakers take D’Angelo Russell, my gut instinct would be to take the best player available at No. 3 or to trade down with an attached future first-rounder for a team looking to trade up.  If Russell is gone, the best available left on the board would likely be Duke’s Jahil Okafor.

I’m not saying I “want” Okafor, but in this situation he has to be taken.  He has the most potential to become a superstar and, even if he doesn’t currently fit team need at the moment, a team looking for an offensively gifted big man might be looking to trade for Okafor either on draft night or shortly after for a few pieces to add to the Sixers core.

Okafor averaged 17.3 points and 8.5 rebounds last season as a freshman for the Blue Devils, leading them to the NCAA national title. If he drops to the Sixers, I’m looking at the Knicks (No. 4) and Kings (No. 6) as teams willing to trade up for him.  The Knicks are in desperate need of a center, with a duo of Andrea Bargnani and Cole Aldrich currently manning the helm.  For the Kings, Okafor could be a fantastic pairing with DeMarcus Cousins, who was named to his first All-Star game last season, averaging 24.1 points and 12.7 rebounds per game in the process.

This would give the Sixers an additional first-rounder in a future draft, while landing a top prospect who’d fit their team need better in the process.  For me, that prospect would be fellow Blue Devil Justise Winslow.

I want the Sixers to draft a sure thing, and between Emmanuel Mudiay, Mario Hezonja and Winslow, I believe Winslow gets the nod. Out of all the prospects in this draft, Winslow has the makings of the most NBA-ready defender and he’s also one of the top athletes in the draft as well.  He can score in a variety of ways, both off the dribble and spot up shooting, and he thrives in transition.  He may not have the highest ceiling, like Mudiay, or the best jump shot, like Hezonja, but in my opinion he’s the most well-rounded of the bunch. A two-way player with a great work ethic is the type of player Sam Hinkie and Brett Brown lick their chops over and they can figure out later if his 6-foot-6 frame will play the small forward or shooting guard spot come October.

C. Smith:  First, I want to state for the record that I believe this is a smoke screen, a misinterpreted quote or whatever and that the Lakers will take a big at No. 2.  While the LAL have numerous holes to fill, their most pressing need is in the front court and the top of the 2015 Draft is rich in quality big men.

However, should the hated Los Angeles Lakers poach my favorite 2015 Draft prospect for the 76ers, I would immediately start entertaining trade offers for the No. 3 pick.  If I can slide down in this Draft (no further than No.6 I would think), pick up an extra asset or two and then grab Justise Winslow or Kristaps Porzingis or Mario Hezonja, I would view that as a successful move.

Still, after receiving a host of phone calls from other needy NBA teams and considering all the options, in the end my basketball mind would eventually step in and tell me to stay the ‘we desperately need a point guard’ course.  Thus if the Lakers take Russell, I would have to select Emmanuel Mudiay at No. 3.  I understand that Mudiay is the less polished out of the two top guard prospects in this Draft and a number of NBA front office people I have spoken/texted with are not loving what they saw of Mudiay in China, but I just don’t see the need to select another big at No.3 at Draft15.  The only reason I can conceive for taking Towns, Okafor or Cauley-Stein is if the Sixers’ medical staff is concerned about Embiid’s health and tell me I should be looking to pick up an insurance policy this June.

Again, for a number of reasons I would prefer to have Russell, but a lineup of Noel, Embiid, Covington, Mudiay and Wroten/Jordan McRae (or another 2-guard TBD) would be a significant improvement over what the 76ers put out on the floor in 2014-15.  Thus I am taking Mudiay at No. 3 if Russell is not available.

Michael Kaskey-Blomain:  If the Lakers end up selecting Ohio State’s D’Angelo Russell with the second overall pick of the 2015 Draft, it would be disappointing for the Sixers organization, but it would not be the end of the world.

Russell really seems as though he would be a perfect fit in Philly. His size, speed, and athleticism could plug in perfectly to the team’s vacant point guard of the future position, and his ability to space the floor with his shot would make him an ideal complement to post players like Joel Embiid and Nerlens Noel. Thus, the hype about Russell potentially landing in Philly is understandable, but if he did happen to be off of the board by the time the Sixers select third overall, the team would have other options.

The most obvious option in this scenario would be to take the best available player. If Russell goes in the top two, that means that either KAT or Okafor will still be on the board. The Sixers could use their pick on whichever one remains, in turn completely stocking the front court. If this were to occur, the team would have a couple options: They could try to figure out a rotation where all three post players (Embiid, Noel, #3) co-exist and they try to develop one of the league’s deepest front courts, or they could determine which of the players they see fitting with the franchise, and then flipping the other player for the best available offer. You’d have to imagine that Noel, Embiid, or KAT/Okafor would fetch pretty well on the open market.  If Russell is gone, that is an option they can consider.

The Sixers could also stick with the point guard position if Russell is gone, and select the draft’s mystery man Emmanuel Mudiay. Hinkie was reported the only GM that saw Mudiay play in person overseas last season, so he is certainly familiar with him. Mudiay’ upside is high, although question marks remain. If the team really wants to land a potentially high-caliber point guard in this draft, Mudiay could be their guy if Russell is gone.

The last and likely least probable, option the team has if Russell is gone in the top two, is drafting for fit. With two lottery picks spent on two big men over the past two years, the team could decide that the front court is full and look past whichever big guy remained between KAT and Okafor, and instead select a perimeter player. Hezonja, Porzingis, Justice Winslow; all perimeter players that could potentially be nice fits with the Sixers, and next to Embiid/Noel. The team will certainly need to add consistent perimeter players at some point. At this early stage of the rebuild however, drafting for fit isn’t necessarily the best option, as selecting the best available is a more sound strategy.

In all likelihood, the Lakers will select a big guy with the second overall pick in the draft, as the Lakers are an organization that has had great success building teams through big men (Wilt, KAJ, Shaq, Gasol). Plus, as long as Kobe is a Laker, he is going to have the ball in his hands a lot, which naturally pairs well with a complementary big man. With Julius Randle already in tow, it seems that the Lakers could really fortify their front court of the future with their second overall selection. If they did decide to go with Russell, it may throw a slight wrench in the Sixers’ plans, but they would still have several other options.