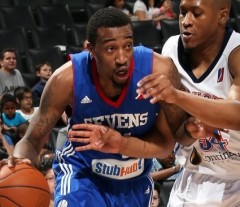 If you read this site on a regular basis or for that matter have access to the  ol’ inter web, then you probably know that 76ers’ 2014 draft day acquisition Jordan McRae played excellent basketball on two different continents this past season.  First, McRae went “Down Under” and quickly became the best option on the Melbourne Tigers of Australia’s National Basketball League.  McRae was the NBL’s second-leading scorer as he averaged 19.9 points, 4.7 rebounds, and 2.7 assists per night.

After his very successful run in Australia was up, McRae came back to the States and played for the 76ers D-League affiliate, the Delaware Sevens.  In 13 games with the Sevens, McRae posted 18.9 ppg. on 45% shooting from the field and 38% from deep. The highlight of McRae’s brief time with the Sevens was a 39-point, 13-rebound, and 6-assist night against the Oklahoma City Blue back on March 22nd.

There’s no doubt that this Sixers’ prospect turned some heads with his play overseas as well as in the D-League and that he will be under strong consideration for a roster spot at training camp this fall.  With McRae on the verge of becoming a key piece to the Sam Hinkie’s rebuilding process, I decided to check in with the shooting guard.

Smith:  Obviously you played well down in Australia (19.9 points, 4.7 rebounds, and 2.7 assists per night).  In terms of on the court, what areas do feel you improved the most down in Australia?

McRae:  I got better as a player in a lot of ways.  Most of all on defense.  Physically I’m stronger and I put on some weight. I also kept my offensive game sharp and added a few things.

Smith:  Last time we talked, they had you working on your defense down in Australia. Do you feel you made progress on that end of the court?

McRae:  I did.  I am still athletic, but now my foot work is improved.  Plus with me putting on some extra weight that will help me as well.

Smith:  What was your favorite on-the-court part about playing in Australia?

McRae:  It was my first year as a pro player so everything about it was cool.

Smith:  Off the court what will you take away from the life experience of playing overseas?

McRae:  It’s a life changing experience.  It’s not like playing ball here in the states at all.  You are away from family and friends.  I didn’t know hardly any of the players at all and a lot of the players are older than I am.  It’s a huge adjustment and you have to grow up real quick.  Their culture isn’t hugely different from ours and English is spoken in Australia so there wasn’t a culture shock for me, but it was a unique experience.

Smith:  After your time in the NBL (AUS) you played 13 games with the 76ers D-League affiliate. How do you feel you played in your time with the 87ers?

McRae:  The speed and athleticism is much different (than Australia) and once I got back in the rhythm I think I played very well.

Smith:  You had several big scoring nights for the Sevens(two 30+ point outbursts). What was the feeling like for you to put up big numbers as a professional here in the States?

McRae:  As a professional, you have to prove yourself everywhere you are at.  So I was just trying to show the Sixers front office that I am able to play in this League. I think I did that and preformed well.

Smith:  Overall how was your experience in the D-League with the Sevens?

Smith:  Was there one or two things you took away from playing in the D-League that may help you prepare for NBA ball?

McRae:  You know there’s actually a lot.  In the D-League there are guys who have been up and down (Between the NBA and D-League) or guys who were high draft picks and made it for a minute.  So it’s great place to get advice and knowledge on how to take that next step.

Smith:  On the court, what is the biggest difference between balling in Australia vs. the D-League?

Smith:  You mean the actual ball used on the court?

McRae:  Yeah.  When I was working out for the Draft, I got comfortable with the ball they use in the League.  The ball in Australia is not the same.  It’s more like the ball you use in college, but not exactly.  It’s softer and slicker compared to the leather ball they use in the NBA or D-League.

Smith:  Where are you working out these days?

McRae:  I’m here.  I’ve been Philly for almost the past month now.  I’ve been staying with Jerami (Grant) and Glenn (Robinson III) and I’ve been working out at the facility every day.

Smith:  Who have you been working out with down at the 76ers complex?

McRae:  Me, Isaiah Canaan, Jerami Grant, Glenn Robinson.  Hollis is here.  Joel is here.  Rob is here.  Pierre just came in.  So there is a lot of us grinding it out and it’s been really competitive and fun.

Smith:  What’s the workout plan for this summer – will you continue to work out here in Philly?

McRae:  Yes.  I have been working out constantly here and have built relationships with the guys and the staff, so I am going to continue to work hard here in Philly.  It’s actually fun to be around the guys on the team.

Smith:  Are you going to participate in the NBA Summer League (Las Vegas) with the Sixers?

Smith:  You had a very solid showing in the summer league last year.  Are you at all worried that this summer you might not match the effort and skills you displayed for the Sixers front office in Summer 2014?

McRae:  It’s not something I think about.  Even if I don’t score as many points as I did last summer, I know I am a much better player than I was at this time last year. I am a much better defender and I have improved my ability to knock down open shots.

Smith:  What parts of your game are looking to continue improving this summer/off-season?

McRae:  Everything.  I want to be a better catch and shoot player.  I also want to develop into a lock down defender.  I think if I can add those two things to my game, I should be much improved over the player I was in college.

Smith:  Will you get to go home (Savannah, GA) and relax at all this offseason?

McRae:  Yeah.  We work out Monday – Thursday and I get to go home on the weekends.

Smith:  What are your favorite things to do when you are home relaxing?

McRae:  We just like to have fun.  I’m a big spades player and I find that relaxing.

Smith:  We know from our previous interview that you were able to watch the Sixers while you were down in Australia, so what were your impressions of the team?

McRae:  It’s a young group of guys that are hungry just like me.  Even with the losses, they look like they enjoy working hard and they are playing their hearts out.  That’s the name of the game – go out there and play hard and do the best you can.

Smith:  You were one of the NBL’s top scorers last season. Will that offensive output ability be able to translate well to the Sixers who are in need of perimeter production?

McRae:  I can’t say that for sure.  I have been able to score the basketball for my whole life, but you know the NBA is a different game.  I believe there will be nights where I can put it in the basket, but I am going to earn my way on the court by playing defense.

Smith:  The team doesn’t have its perimeter positions set in stone at all.  Do you see an opportunity to come in to summer league and then training camp, make a name for yourself, earn a roster spot and see some minutes in 2015-16?

McRae:  I think I could.  I have to work hard and I am ready to do that so I think there’s a chance.

Smith:  What is the Sixers’ coaching staff telling you about that type of opportunity to make the Sixers roster you have ahead in 2015-16?

McRae:  We talk a great deal and both they and I believe there is an opportunity for me.  I just need to take advantage of it.

Smith:  Between you, Embiid, & Saric, the Sixers have three picks from the 2014 Draft that have yet to play for the team, but could eventually be key pieces.  How do you feel about the team’s patient approach  to adding talent and the rebuild in general?

McRae:  I love it.  Being here and working out together and then hanging out together, it gives us a chance to gel on and off the court.  There’s a feeling that we are building something special. When it all comes together, it’s going to be a very fun team to watch.

Smith:  After the 76ers drafted you, you headed off to Australia and then the D-League.  I know you kept in touch with guys on the team and the coaching staff, but did you ever feel like a forgotten piece to the Sixers future?

McRae:  I understand what you are saying, but I really didn’t.  I trust in what is going on here, I was willing to put in the work wherever they wanted me to be and I believe in this process.

McRae:  I’m not going there.

Smith:  I have to assume you would prefer that Sam Hinkie draft another big man?