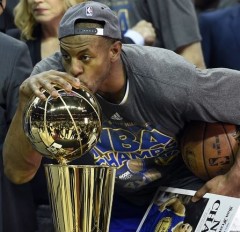 Editor’s Note: The following article by former Philadunkia scribe Tom Sunnergren was originally posted in May of 2011 as part of this site’s 2010-11 season review / wrap up.  We are reposting the story today for two reasons.  The first is that it serves as smooth tip of the cap to former 76er Andre Iguodala, who is now an NBA Champion and NBA Finals MVP.

The second reason is that given Dre’s role with Golden State Warriors this season and especially in the Finals, the content contained in Sunnergren’s fictitous interview style post is extremely fitting.

After a regular season that exceeded expectations, and a post-season that more or less met them, Andre Iguodala has already had a very trying offseason.

Always a lightening rod for controversy and never popular with the fan base, Iguodala skipped his exit interview with the 76ers front office executives and is said to be trying to force his way out of town.

Amidst these rumors swirling about the longest tenured Sixer, we at Philadunkia got an opportunity to sit down with him this weekend and get his take.

SUNNERGREN:  So Andre, let’s cut to the chase.  We’ve all heard the rumors, let’s hear it from you.  Do you want to stay in Philadelphia?

IGUODALA:  That’s a very good question Tom.  A very good one.  Do I want to stay in Philadelphia?  I mean, why wouldn’t I want to stay in Philadelphia?  Who wouldn’t want to play for a fan base that appreciates and understands their game the way Philadelphia understands mine?  I can’t tell you how satisfying it is to be arguably the premier wing defender in the NBA, an outstanding rebounder, a terrific passer, a guy with a good handle who can take it to the rim, but be nevertheless picked apart and absolutely lambasted because I can’t hit f***ing jump shots.  I excel in literally every other aspect of the game.  Literally every single other thing you can do in the game of basketball to make your team more likely to win the game, I do the s*** out of.  I stuff box scores like they’re f***ing Christmas stockings.  So I can’t hit 18 footers. Look at my numbers.  Look at my f***ing numbers.  If I hit jumpers I’d be f***ing LeBron James.  ‘Oh god, he’s worse than LeBron James.  We oughtta punch him in the face.  Break his teeth cause he’s worse than LeBron.  That’s our standard, if you’re worse than LeBron — the best basketball player on the planet earth — we murder you.  That’s a completely fair and reasonable way to evaluate players.’  So yeah. I’d love to stay in Philadelphia.  The fans here are very intelligent.  They’re really reasonable.  I’d love to continue to play for them.

SUNNERGREN:  Okay.  You seemed to deemphasise offense this year, and instead–

IGUODALA:  So you’re a writer, right?  You write, that’s the thing that you do.  Can you take pictures though?

IGUODALA:  Oh, you can’t take pictures?  F**k You.  BOOOOOOOOOO. BOOOOOOOO.  Why don’t you learn how to take a mother f***ing picture.  That’s the most important thing in a paper.  The first thing you see is the picture and you can’t even take one you piece of s**t.  I don’t care if you’re F. Scott f***ing Fitzgerald, get the f**k out of here and don’t come back.  Get me a guy who can take a picture.  That’s a reasonable way to think, right?  To judge somebody entirely on the basis of the one thing they can’t do.  To define someone by their lone weakness.  That’s a very reasonable way to do analysis.  That’s what I love about Philadelphia fans.  They’re smart enough to recognize that if a player has one weakness — even if the rest of their game is just superlatively good — they’re a worthless piece of s**t.  That’s what I love about them so much.  I would love to spend the next eight to ten years living among these people.  That would be very good for me psychologically.

SUNNERGREN:  Alright.  Speaking of psychology, it seems like your experience with Coach K last summer taught you a lot.  Why was that–

IGUODALA:  Take Ben Wallace.  He won a title with the Pistons.  He was the best player on a championship team.  Oh wait, never mind.  I forgot that he wasn’t a scorer.  So I guess it doesn’t matter that he led the League in rebounding and was the defensive player of the year and carried a team without a superstar to a championship.  I forgot that none of that matters.  I forgot that if you’re not good at shooting, you f***ing suck.  Get out of the NBA.  Shooting is the only part of the game.  I always forget that.  Defense? Whatever.  Passing?  Who gives a f**k.  The NBA is one long game of HORSE.  The only thing that matters is how well you can hit a f***ing jumper.  I always forget that and Philadelphia fans don’t and that’s why they’re better than me and I deserve the horrible things they say and write about me.  I deserve it.  I’m an asshole who can’t hit 15 footers.

SUNNERGREN:  Well, I wouldn’t say that.  I think the problem most fans have, insofar as you could say we have a problem, is that you sometimes —

IGUODALA:  And it’s also my fault that I’m the best player on the team and we don’t have enough play makers and that means I’m forced to do things that fall outside my broad skill set.  This is my fault because I’m the GM.  Sometimes I think to myself ‘Oh Andre, this criticism is unfair.  People shouldn’t be giving you a hard time about missing shots in crunch time because you really shouldn’t be taking them in the first place.’  I think this until I remember that I hand pick all the players on the team.  Then I don’t feel sorry for myself.  I remember that the fans are justified in blaming me for the fact that we don’t have anybody who is a great scorer, because I am actually the general manager of the basketball team I play on.  So that criticism is completely fair and valid.  Because I’m the GM.

SUNNERGREN:  I don’t think that’s exactly what people mean when they say —

IGUODALA:  Oh and scoring.  Right.  Let’s talk about scoring.  I can’t score.  At all.  Do you like facts?  Here’s a fact — my career true shooting percentage is .555.  And Kobe Bryant’s is .556.  So I can’t score at all and that makes me suck but I do it basically as well as Kobe Bryant, and he’s the best scorer ever and I’m an overpaid piece of s**t.  That might confuse someone who uses facts to make decisions about things, but you know what that person would be missing?  That facts are for douchebags.  Philadelphia fans get that.  They understand that if you use facts you’re an asshole.  So I love them. I love this city.  And that’s natural right?  For feelings to be reciprocal?  They sure are in my case.  I feel the same way about Philadelphia as they feel about me.  The exact same way.

(Editor’s Note: This post was the second installment in Tom Sunnergren’s fictitious end of the season interview series.)