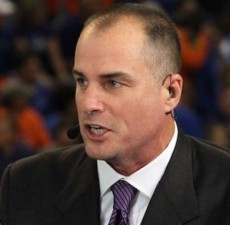 Yesterday ESPN college basketball analyst and NBA Draft guru Jay Bilas conducted a media call to discuss the 2015 NBA Draft in general, the upside of numerous prospects and his thoughts on what NBA franchises will do with their draft picks.  Needless to say, Bilas was not short on opinions and had some very interesting takes on Thursday night’s Draft.

Once the call concluded, I went and pulled some of quotes that I felt would apply to the 76ers or prospects that have been connected with Sixers.  After the jump are words of wisdom from Bilas, who once again this year will be on site at Barclays Center in Brooklyn as an analyst for the 2015 NBA Draft

Q:  What do you think the Wolves should do with the No. 1 overall pick?

BILAS:  Yeah, I don’t know.  I don’t know that it’s necessarily need versus best available player.  I tend to think No. 1, unless you’re like the Detroit Lions and you’ve got a whole bunch of wide receivers and the wide receiver is the best pick, why you don’t go with the best overall player.

I’m actually kind of torn on the No. 1, sort of who the best player overall in this draft is.  I think Karl‑Anthony Towns is the most versatile player.  He’s good at everything.  There is nothing that we can tick off as far as attributes that he’s not good at.  Nothing.  Okafor has question marks on his defense, his ability to defend the pick‑and‑roll.  He’s not a big‑time shot blocker, rim protector, but he’s not a zero in that regard.

But Okafor, I tend to lean toward Okafor because he’s a dominant low‑post scorer.  Towns is not dominant in any one area.  Maybe he’ll become that.  But Okafor is the superior, low‑post scorer, and I lean toward that.  I think he was hurt during the year and it affected him.  I think he would have been much better had he not played against North Carolina, and having played the rest of the year without getting healthy.

But I would not argue with anyone, anyone that likes Towns better, not one person.  And I am sweating ‑‑ like, if it were my decision to make, I would have a really tough time with it.  And I would probably defer to all of our people to say where we are on this because I’m kind of torn.  I’m leaning one way, but I wouldn’t argue with anybody who has a differing view with me.

Q:  What are your thoughts on Mario Hezonja, and what risks could a team face taking him so high?

BILAS:  Well, I mean, Hezonja I’ve only seen him on tape.  And what I’ve seen I’m really impressed with.  Fran Fraschilla has seen he and Porzingis in person, and is the far better resource on those two guys than I am.  But I can tell you what I think.

I don’t think there is any downside with Hezonja.  There is nothing he’s not good at.  He is competitive.  He’s big, he’s strong, he’s athletic.  He can shoot it.  He’s a really good shooter.  He puts it on the deck.  He can defend.  There is nothing I don’t like about that guy, nothing.

I think it was Fran who said he’s the only guy in this draft that can compete legitimately in the three‑point contest and the Dunk Contest in the NBA.  From what I’ve seen on tape, I’d absolutely concur.  There is nothing not to like with this guy.

The caveat, I haven’t seen him in person, and I don’t know him.  Like a lot of these guys that have gone through high school here and in college, I’ve not only seen them but I’ve met them and been around them and you feel like you know them.  I do not know Mario Hezonja.  But, boy, from what I’ve seen, what’s not to like?  He looks really, really good.

Q:  What are your thoughts on Emmanuel Mudiay? What do you think of his decision not to play college ball in the States and how that may or may not affect his draft stock?

BILAS:  Yeah, I don’t think his decision to play in China will hurt him at all.  In fact, I think it overall will help him a little bit.  He didn’t have a choice.  He couldn’t play college basketball last year, so he had to do something else.

So I think he’s an outstanding prospect, top five good.  We may look back on this draft as we have with others and say, hey, he was better than some of the big guys.  He was better than this, better than that.  But he’s a top five talent.  With his size, his explosiveness, his ability to get into the lane and finish plays.  He’s a good distributor, and he has the potential to be an excellent defender.  He’s a very good defender that can be excellent in the NBA.

He spent the year playing with a 24‑second clock, working out all day every day overseas.

And when he got into the playoffs, he performed, after being injured, he performed at a very high level during his time ‑‑ his team’s time in the playoffs.  So I don’t have one bit of hesitation with mood yea as a prospect.

It’s just a question of do you think D’Angelo Russell of Ohio State may be a little better, or as I do, do you have Karl‑Anthony Towns or Jahlil Okafor over him?  I actually have Mudiay, Winslow and Russell ahead of Porzingis, which not a lot of people have which puts me on an island.  I’m not sure if I’m right or wrong, but that’s sort of my judgment.

Q:  What are your thoughts on Michael Frazier (University of Florida) as a draft prospect?  How much did he help himself in the Combine? How do you think teams will weigh that versus the college career that he has?

BILAS:  Michael Frazier as a shooter, he’s one of the better shooters in the draft.  But I see him as a second‑round pick.  And I think I’ve got him slotted right around 40 on my best available list.  So I would put him there.

I think as a second rounder, to have a guy, I think at least I’d wind up moving guys up, and Michael is one of those that’s higher.  There are other guys that are probably better overall players, but the fact that he’s got this specialist type skill in shooting puts him higher as a result of it.  And I would do the same thing with a guy who is a lockdown defender or maybe like Alan Williams from UC Santa Barbara who is a great rebounder.  He’s maybe not as good of an overall player, somebody else all‑around, but that one special skill puts him above some other guys

Q:  Would you take a chance on Chris Walker (University of Florida) in the second round?

BILAS:  I think it could happen because of his size, athleticism and strength, but the one caveat to that, is after he came out of high school and played in Florida, it’s pretty clear that he’s got a long way to go in knowing how to play.  He is behind.  So I would be very surprised if he were drafted.  He fits the suit athletically and body‑style‑wise, but he’s not demonstrated that he knows how to play and has the skill level necessary to make the jump.

He’s still a project, and I think he’s somebody that you could see bringing in as a free agent, but I would be surprised if he were drafted.

BILAS:  Jerian Grant is not ‑‑ I really like him.  He’s an older player.  He’s been around, he’s done it all, and he’s ready to step in and play.  I think he can initiate and play some point.  He’s not a great shooter, but he makes shots and he can create shots and make challenged shots, very good passer.  I think he has the length and athleticism to be a better defender.

I think he needs to work hard to be a better defender.  I like his prospects.  I’ve got him ranked about 19, I think, in that range.  He’s not the most efficient, but his team required him to do a lot of different things and to be really aggressive and hunting shots, and at times take some questionable ones.  He had to do that.  But he’s a really good prospect, and I think he’s a first round draft pick.  Then the second one you asked about was?

Delon Wright is excellent.  He’s got size.  He’s excellent out of pick‑and‑rolls.  Very good passer.  Very good feel for the game.  He’s not a great shooter, so that’s on the negative side.  He’s going to have to become a more competent shooter so you really have to come out and get him.  But good defender.  Like Grant, an older player.  So you’re getting a mature player who is going to come in and ready to perform.