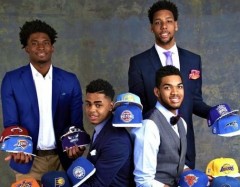 The 2015 NBA Draft is just hours away and the top basketball prospects from around the world have gathered in New York City in hopes of hearing Adam Silver call their name tonight at Barclays Center in Brooklyn. Among the 19 players invited to gather in the green room during the NBA Draft are top talents such as Karl Anthony-Towns (Kentucky), Jahlil Okafor (Duke), D’Angelo Russell (Ohio State), and Emmanuel Mudiay (Congo).  There is no doubt all of these guys have earned their invitation to the green room and will be called on stage early tonight.

However, there is always one prospect sweating it out and cursing his agent as name after name is called and he is left to fiddle with his smart phone in the green room.  For that player, this draft night experience will be torture.  For us as viewers, it will be very uncomfortable to witness.  Think Jameer Nelson at the 2004 NBA Draft.

So the question here is who will be the last man sitting in the green room at the 2015 NBA Draft?

Out of the 19 players backstage I think the person who will be disappointed is Rondae Hollis-Jefferson out of Arizona. Come draft day I think he might be the one slowly starting to wonder why his name is falling further back. There are some positives; Jefferson has a NBA ready body. He is big and broad and has a 7’1 wingspan. He also has decent control and is aggressive when attacking the rim. Lastly he is a powerful dunker.

Now, all that being said this is why Jefferson will be bighting his fingernails come draft night. His shooting mechanics need tremendous work. He needs to improve on his mid-range jump shot. He struggles pulling up off the dribble just as much as spotting up on the floor. He also does not bring any threat from the 3-point line. Second he is very inconsistent from the charity stripe. Teams want someone with confidence to head to the line. This can be seen this year with the quite frankly embarrassing Dwight Howard and DeAndre Jordan intentional fouls. There is just too much talent in front of Jefferson along with his weaknesses.

I think his green room visit will last significantly longer than he ever dreamed.