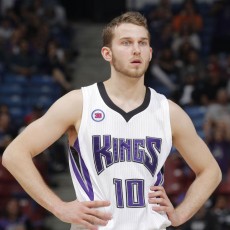 When I woke up this morning and read the 76ers news on Twitter, I laughed…I smiled…and I cried a little (for Vlade Divac). In the over night hours, Hinkiepalooza struck again.  This time Sam fleeced the Kings of Nik Stauskas (fomer No. 8 overall pick in 2014 Draft); power forwards Carl Landry and Jason Thompson, a 2018 protected top-10 pick and the right to swap first-round picks in 2016 and 2017.

The Kings will receive the rights to two of  the Sixers’ 2015 second-round draft picks — Arturas Gudaitis (47th) and Luka Mitrovic (60th).

Obviously this a tremendous deal for the 76ers as they acquire a very good shooter and numerous  “assets” for the future.  Still, if you dig a little deeper and look at the trade’s impact on the 2015-16 season, the move does create a log-jam at shooting guard — Jordan McRae, Stauskas and Hollis Thompson (2015-16 is non-guaranteed) if you dare.

C. Smith:  I’m sticking with Jordan McRae.  While I absolutely love the deal in its totality for the 76ers, I am not as high on Stauskas as many in Philadunkia nation.  Yes, Stauskas is a 6-foot-6 shooter who played very solid ball over the final weeks of last season (banged home threes at a 41% clip in last 22 games; 47% in 14 games during March) and is still on his rookie deal.  However, Stauskas is slow and lacks elite athleticism, is a defensive liability and can not create his own shot.  In short, he is missing some key elements that a high quality NBA starting two-guard owns.

Now Stauskas may develop some or all of those parts of his game and become a much better player, which would make this trade and even bigger robbery for Hinkie, but that’s down the road some.  So, he’s not my starting shooting guard in 2015-16.  For next year the best thing about acquiring Stauskas is that hopefully his hot girlfriend Taylor Anderson will be down at the Center.

On the other hand, McRae (6-5 with 7-foot wingspan) has all of the above items in his offensive game and spent the last year working on his defense in Australia and the D-League.  His size, athleticism and vertical leap combined with his ability to score the basketball from the perimter or at the rim make him a perfect fit to play shooting guard in the Association.  Stauskas is a solid player with nice upside, but for the 76ers in 2015-16 McRae is a much better choice at shooting guard.

Jeff McMenamin:  Sam Hinkie pulled off another Hinkie special last night, acquiring Nik Stauskas from the Kings, but with shooting guard Jordan McRae likely joining the 15-man roster for the 2015-16 season, suddenly the Sixers will have a decision to make regarding their shooting guard situation.

Philadunkia’s own Michael Kaskey-Blomain pointed out what McRae is capable of doing offensively and could potentially add to the Sixers roster next season.

“During his year with the Melbourne Tigers, McRae was the NBL’s second-leading scorer, posting an impressive average of 19.9 points and 4.7 rebounds per game. He was his team’s best offensive option, and he consistently demonstrated the ability to space the floor and also create for himself. Back stateside with the 87ers, McRae continued his offensive onslaught, averaging 18.9 points per throughout his 13 games with the team.”

Although impressive numbers, McRae will likely need to adjust to the NBA’s style of play and lifestyle before he can be considered a starting option for the team. I believe Stauskas will likely get the nod from the day he walks into PCOM.

Stauskas is just a year removed from being drafted with the eighth pick by the Kings, in a draft where he was highly touted by the Sixers and who most likely would’ve drafted him had he dropped to them at No. 10. He may very well immediately become the Sixers best shooter on the team, although he’ll need to take that title away from Robert Covington first.

Stauskas had his struggles last season for the Kings, averaging just 4.4 points in 15 minutes per game, shooting 32.2 percent from the outside. But as Derek Bodner pointed out, he showed a bit of life in the second half of the season, upping those numbers to 6.6 points in 19.4 minutes while shooting 42.1 percent from deep. He was a career 44.1 percent three-point shooter in college at Michigan.

A long shot to start for the Sixers would be Hollis Thompson, who has started in 64 games over the past two seasons at both the shooting guard and small forward positions, but who had somewhat of a disappointing 2014-15 season and whose contract situation needs to be figured out before the season. The Sixers have a team option for Thompson for the next two seasons worth right around $1 million. Thompson averaged 8.8 points in 25 minutes while shooting 40.1 percent from beyond the arc. He’d be cheap enough to bring back, but his ceiling seems to have been reached as an NBA prospect.

But once again, Hinkie has been able to acquire assets for virtually nothing except taking on salary. Stauskas has the potential to be a lethal threat from the outside – exactly what the team was looking for.

Michael Kaskey-Blomain:  Despite the addition of Nik Stauskas, I still see Jordan McRae starting in the shooting guard spot for the Sixers this season.  Stauskas was a great pick-up, especially considering he was a guy they’ve wanted since before 2014 Draft, and they got him going into only his second season.  He is a great piece to fit alongside Noel/Okafor/Embiid as he can help to space the floor with his shot. With that being said however, Stauskas still has a lot of developing to do, thus I think he will, at least at first, start out in a reserve role.

McRae is coming off of an entire season playing professionally overseas, and while he still has a lot of developing to do himself, he is probably a more polished player at this point.  He can also bring more to the floor.  Whereas Stauskas is a solid knockdown shooter, McRae can also put the ball on the floor, take it to the rim and create for himself, in addition to having a solid shot.  McRae’s size and athleticism make him a prototypical shooting guard, as he has the potential to develop into a nice two-way player, something that is becoming increasingly valuable across the League’s landscape.