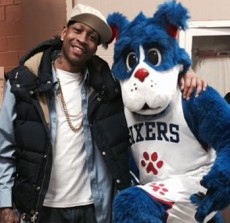 The back tab of the right Air Penny V displays a simple message:

‘The Storm is Over’

The epitaph is a nod to the fact that Penny’s career has passed, hence the storm being over. The shoe released in 2012, well after Hardaway’s retirement from the NBA, and served as an ode of sorts (It was clearly modeled after the Air Penny II – Penny’s most popular model).

The sentiment is nice, but realistically it probably would have been better-suited for Allen Iverson.  Iverson blew through the NBA like an unprecedented, unrelenting tornado, felt by everyone across the league’s landscape.  And, like some squalls of such magnitude, the storm that was Allen Iverson –the dominant NBA player –ended rather abruptly.

The League now lays in its wake; forever changed.  Players look differently – tattoos and cornrows are now a common occurrence. They play differently – growing up LeBron James didn’t want to be Michael Jordan or Magic Johnson.  He wanted to be Allen Iverson. They even act differently- long before Riley Curry was a controversial staple at post-game press conferences, Iverson would occasionally bring his kids up on stage with him.

Despite his impact, Iverson spent the end of his career bouncing around a few franchises without finding a real role, or home, away from Philadelphia.  It wasn’t exactly a fitting ending to a hall-of-fame caliber career, and it fueled widespread speculation as to why such a productive career ended so sourly; seemingly prematurely.

Upon his retirement in 2013, many true Iverson fans found themselves wondering ‘what if’.  Iverson accomplished so much, but you couldn’t help but feel that he still had more to give to the game.  Iverson himself spent plenty of time soul-searching, and reflecting on potential mistakes made, or things he could have done differently to alter the ending of his career.

The man known as The Answer didn’t get to where he is by dwelling on the past however, and he doesn’t plan to start in the post-basketball portion of his life.

Though it may not provide the same thrills as suiting up for the Sixers, Iverson is content in retirement.

“Me and my family are straight.  I’m alive man, I’m healthy and that is the only thing that matters,” Iverson explained at the recent unveiling event for the 2015-16 76ers’ uniforms.

Over three years removed from his last played game, Iverson remains the Sixers most popular player – a title he may never relinquish – and an icon in Philadelphia: A line several hundred deep, consisting of all ages, stretched throughout the already-crowded King of Prussia Mall on Saturday afternoon as Iverson signed autographs inside The Sports Vault.

The former Georgetown Hoya is staying active as an ambassador for the Sixers, and he recently inked a new endorsement deal with NBA sock supplier, Stance.  He still has goals, too.  Iverson recently told Bleacher Report that he is aiming to become a professional fisherman.

“I want to get good enough to compete with the best in the world and be on ESPN.  I’m good right now, but I could be the best.”