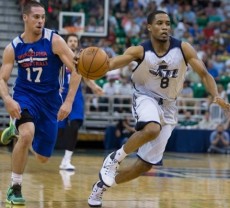 Jordan McRae scored 19 points, Furkan Aldemir was a beast on the glass, Jerami Grant posterized a defender and the Summer Sixers staged a gutsy comeback on Thursday night.  Still, what really stood out last night was just how sloppy and slow the summer squad played for a large majority of their 84-78 OT loss to the Summer Jazz.

The Summer Sixers turned the ball over 26 times, shot 23% from three, committed 31 fouls, played horrific transition defense and in general looked very tired.  In short, they were simply brutal for three quarters.  A miraculous 4th Q turn around allowed the Summer Sixers put on a 20-7 run and grab a 74-68 lead.  However, the Jazz refused to lose in front of the home crowd and outscored the Summer Sixers 18-4 over the final minutes of the game (regulation & OT) to post the win.

After the jump, a few observations from the final game of the Utah Jazz Summer League.

Jahlil Okafor:  I’ll start with two positives regarding Hinkie’s 2015 Lottery selection.  Okafor put on several moves last night that made me smile real wide.  The one-hand bank shot after contact and the split of a double team, spin baseline and hit the floater were my to favorites.  I have also noticed that Okafor manhandles the pill as if it were a Nerf ball.  Not since Dr. J have I seen a Sixer cup the ball in one hand so often and look so secure doing it.

Now for the bad…First and foremost, Okafor looked very tired last night.  That’s probably to be expected for an NBA vet during the third game in four nights of the regular season.  However for it to to happen to a 19-year old during summer league play is a bit of a red flag for me.  Secondly, Okafor (maybe because he was tired) appeared to have trouble moving former Golden Domer, Jack Cooley (6’9; 250) around the blocks.  That doesn’t bode well for when Okafor faces real bigs in regular season NBA action.  Lastly, Okafor turned the ball over 6 times last night and on a couple of offensive trips simply had the ball ripped from him (again, maybe because he was tired).

Jordan McRae:  Again, no one is a bigger fan of McRae then me, but if he doesn’t locate his jump shot soon, he might want to start looking for an apartment in Newark, Delaware.  JordyMac was 1-7 from three and 5-16 from the field.  He did drain 8-10 from the charity stripe and score 19 points, but like the Summer Sixers as a whole last night, McRae’s performance wasn’t pretty.

Posterization:  Jerami’s Grant ridiculous baseline flush in the 1st Q propelled the Sixer wingman to a very nice game.  Grant scored 10 points on 4 of 8 shooting from the field and was one of the few 76ers to display a respectable amount of energy and effort last night.

Point Guard Play:  Despite 5 turnovers and only 3 dimes, I thought via the eye test that TJ McConnell (10 pts.) looked better last night.  At times, the Zona product seemed to have the Sixer half court offense under control and his decision making in the pick and roll was improved.  I still don’t think there is a spot for him on the regular season roster.

The Summer Sixers Are Slow:  The number of transition buckets the Summer Sixers yielded last night (stats say it was only 15 pts, but it seemed like significantly more) was alarming.  The first-five of Okafor, Aldemir, Grant, McRae and McConnell are disturbingly slow at getting back on defense.  Additionally, this group is lateral movement challenged on defense and they made Bryce Cotton look like Stephon Marbury during his T-Wolves days.