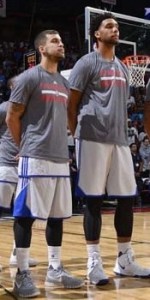 With last night’s 84-81 overtime loss to the Knicks summer squad, the Summer Sixers fell to 0-3 in Las Vegas and 1-5 in the month of July.

The highly anticipated match-up between Jahlil Okafor and Kristaps Porzingis — the #3 and #4 picks in Draft15 — never developed last night as Okafor played solid (18 points on 8-18 shooting), but not spectacular ball and Porzingis was limited to just 9 points.  However, Florida product Scottie Wilbekin put on a show against the Summer Knicks that was something to witness.  His watery jumper produced a 26 point outburst that so far is the highlight of the month for the Summer Sixers.

After the jump, a few observations from last night.

Scottie Wilbekin:  You may recall that last summer Wilbekin ran with the Sixers in Las Vegas and could not find his stroke.  To be honest, in Summer 2014, Wilbekin couldn’t hit the ocean if he fell out of a cruise liner.  Well, the former Florida Gator is back with the Summer Sixers again this July and my how things have changed.  Last night he posted 26 points on the strength of 6 of 8 shooting from three.  He is now 13-for-22 (59.1%) from deep out in Vegas.  Based on how well Wilbekin played overseas this past year and his performance at the Orlando Pro Summer League, his scoring outburst should not come as a huge surprise.  In the past year, Wilbekin has played for Cairns Taipans of the NBL in Australia (same League as Jordan McRae played in) and AEK Athens in Greece.  Wilbekin averaged 15.2 ppg. for the Taipans and became the first player in club history to win club MVP and Defensive Player of the Year honors in the same season.  At the OPSL he averaged 9.6 ppg. and posted a 15 point outing in which he was 5-8 from deep.

Jahlil Okafor:  Again, I thought Jah played solid last night, but not great.  Of course I think he could have posted a much bigger scoring night if the coaching staff had called his number more often.  It was clear that Porzingis could not handle Jah’s physicality down on the blocks and when he did get the ball, Okafor made Porzingis look silly.  My problem is that I would like to have seen the Summer Sixers go to Okafor on nearly every trip down the floor and force the Knicks summer squad to adjust.  On the defensive end, Jah needs a significant amount of work, but we knew that heading into Draft15.  He really struggled to guard Porzingis out on the perimeter and gave the big-Euro too much space to get his jumper off.

They Are Called Free Throws for a Reason:  The Summer Sixers lost this one in OT despite shooting 43% from the field; 43% from three and posting a +3 in the rebounding department.  A big reason for the loss was poor free throw shooting (14-23 — 61%) which is an ill that plagued the 76ers all last season.  Leading the charity stripe brick layers union last night for the Summer Sixers was Okafor (2-7). Three players (McRae; Jackson and Tokoto) went 1-2 from the line.