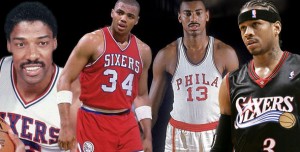 This post is not going to chose a side in that Lakers vs. Bulls debate that has lasted all week (FYI:  After 50,000 simulations by PredictionMachine.com, the Lakers were declared the better team as they won 64% of the simulated games.).  Instead, this article will strongly suggest that an All-Time 76ers team comprised of  — Allen Iverson; Julius Erving; Moses Malone; Charles Barkley and Wilt Chamberlain — would defeat both the All-Time Lakers and the All-Time Bulls teams.

But probably not by 50 points.

I will be the first to admit that this All-Time 76ers backcourt lacks a pure point man and that the Doctor is playing out of position, but given their Hall of Fame careers and amazing skill sets, I am going to go out on a limb and predict that Iverson (career 6.2 apg. average) will figure out a way to distribute the rock to open teammates and that  Dr. J can adjust to the two-guard position.  Hell, maybe Doc even plays a point-forward role on this team and Allen runs at the SG spot.  It really doesn’t matter because with Allen’s ability to blow past defenders and Erving’s ability to soar over opponents, neither the All-Time Bulls or All-Time Lakers is going to stop “The Answer” and Dr. J.

(Editor’s note: 76er legend Hal Greer was also given very serious consideration for a spot in the backcourt.)

According to basketball-reference.com each player in this trio ranks inside the NBA/ABA Top 25 in career average for rebounds per game.  Of course Wilt is No. 1 at 22.8 rpg.  Moses (“Chairman of the Boards”) comes in at No. 16 with 12.2 boards per night and Sir Charles ranks 23rd all-time after grabbing 11.6 rebounds per game over his career.  So I am not sure if the All-Time Lakers or the All-Time Bulls will get many rebounds in their simulated match-ups against the All-Time 76ers.

This Sixers’ All-Time trio also boasts the greatest center in the history of the game who once scored 100 points in a single game (Wilt); an undersized but extremely agile small forward who was one of the best ever and revolutionized the position (Charles); and center / power forward with low post scoring abilities that led to three League MVP awards (Malone).  There is no way the All-Time Lakers or All-Time Bulls could defend this outstanding group of 76er bigs who by the way are all members of the NBA at 50 list.