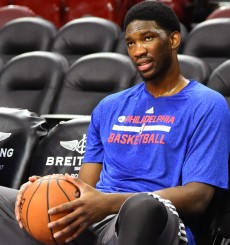 The Joel Embiid saga in Philadelphia continues to be an interesting one.

At this point in the process – a full 13 months since the 76ers selected Embiid with the 3rd overall pick in the 2014 NBA Draft – no one seems quite sure what exactly is going on with the seven footer, and even less sure when we may actually see him out on the court.

Eighteen days ago, after several weeks of speculation and reports, the Sixers announced that Joel would be undergoing surgery on his troublesome right foot, likely within 7-10 days. He was by all accounts ruled out for the entirety of the 2015-16; his second straight full season on the shelf.  Obviously that timeline has passed, and there is still no news about a surgery.

In fact, the only pieces of recent Embiid news came from a report via The Daily News’ Bob Cooney; a video by TMZ Sports and Tweets from 76ers CEO Scott O’Neil.

In his article, Cooney who claimed that sources told him that Embiid re-broke the navicular bone in his right foot.  That is certainly more than the team revealed, and would seemingly be a pretty big deal is true.  This report begs the question: How and when did he re-break it?  The Sixers had no response to Cooney’s report.

On July 21st, TMZ Sports posted a video of Embiid and John Wall strolling around Beverly Hills after dining on Chinese Food at Mr. Chow.  Embiid did not appear to be limping and was was rocking orange sneakers not a walking boot or cast.

Then on July 27th there was this brief exchange between mutli-site 76ers writer Derek Bodner and Sixers CEO Scott O’Neil.

I’m sure there are logical explanations on why the surgery hasn’t happened yet, but silence leads to speculation.

The Tweet from O’Neil provided little clarification on Embiid’s pending surgery, other than to indicate that the Sixers are performing their due dilligence.  But a least someone in the organization communicated with the media and fans.  O’Neil will be at the Sixers’ Beach Bash this Saturday in Avalon, so we’ll be sure to follow up with him then.

Like most things, the Sixers are keeping all of this under tight wrap.  The organization has even taken some heat for sharing so little information.  Media members have not been able to speak to Embiid himself since a conference call shortly after his selection by the Sixers last June.  By rule, injured players do not have to speak to media members.  His Instagram account however has a couple recent posts that don’t necessarily mesh with the prospect of sitting another season.

Joel’s positivity is promising, but the caption ‘Only a couple weeks away’ seems strange, since he is many, many weeks away from being able to suit up for the Sixers.  What happened since that post that has altered the course of Joel’s return?

There are a whole lot of rumors circling around Embiid right now, and the Sixers aren’t providing a whole lot of answers.  The only thing that seems to be certain is that we shouldn’t expect to see Embiid out on the court anytime soon.