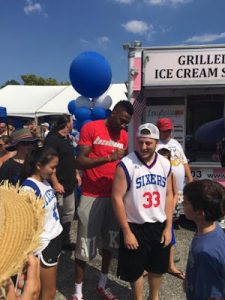 The 76ers held their annual Beach Bash at Jack’s Place in Avalon, New Jersey on Saturday afternoon, and the event had no shortage of support.  Hundreds of dedicated Sixers fans braved near-ninety degree temperatures to spend their sunny Saturday playing games, winning prizes, getting autographs, and mingling with fellow Sixers supporters.

The line for Jahlil Okafor’s autograph stretched around the corner and down Ocean Drive, while Robert Covington wandered around, taking pictures with eager fans, ice cream in hand.  Inside Jack’s, respected Sixers veterans World B. Free, Darryl Dawkins, and Doug Overton served as guest bartenders to the twenty-one-and-over crowd, while the Red Hotts provided a lively musical backdrop.

Despite it being a couple months away from the season’s start, fans were eager and excited.

“This is amazing, how passionate our fans are,” Okafor stated, clearly impressed with the Beach Bash’s turnout.  “I come from Duke, which has extremely passionate fans, and it’s the same thing in Philadelphia.”

Okafor aims to duplicate the success he experienced on Tobacco Road in Philadelphia.

“I have a lot of work to do to make them proud,” he said of the Philadelphia faithful.

The Beach Bash served as a great example of how the team continues to foster support throughout the community despite on-court struggles, while giving the New Jersey fans an event to attend right in their backyard.

Sixers fans have a lot to be excited about in the future, but yesterday they were having a good time in the present, too.