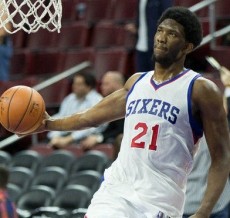 We are ten days into August and it has now been almost a month since the Sixers announced that Joel Embiid, their prized pick of the much hyped 2014 Draft would be having a second surgery on his injured right foot and would most likely be missing a second consecutive season as a result.

The news was a big blow to fans of the franchise eager to see him play, and of course to Embiid himself, who has been itching to play since he was selected by the Sixers last June.

At the time of the Hinkie’s official statement (released 7/11/15), the Sixers let it be known that they anticipated the surgery would take place within 7-10 days from the announcement.

Obviously that surgery has not happened.

From Sam Hinkie’s lengthy statement back in early July:

“We have spent the last several weeks working closely with Joel and his representatives to further evaluate Joel’s foot.  A collective decision has been made that the best approach to promote full healing would be to proceed with a bone graft on the fracture site.”

Is it possible that the ‘collective decision’ didn’t actually account for Embiid’s input?

Since that announcement, both sides have been strangely silent on the issue.

There has not been a single update from the Sixers explaining the delay, or outlining a course of action.  Embiid, famous for his Twitter tactics, has been uncharacteristically quiet on his social media accounts.  Embiid’s social media silence is interesting.  Given the timing, you have to wonder if maybe someone told him to lay low for the time being in order to avoid potential issues.

The more time that passes without an update, the stranger the situation seems. If he needs such serious surgery, wouldn’t both sides want to get it done as soon as possible in order to get him back on track to eventually contribute on the court?

Both sides’ silence, and the continual delay in the expected surgery makes one wonder if the two sides are not seeing eye-to-eye on the issue.

There was a report that Embiid had re-broken the bone, but video of him walking around town without any sort of boot or cast, and an adamant denial by his college coach that he hadn’t re-broken anything make that report seem suspect.  Especially strange is that Embiid’s last Instragram caption reads: ‘My time is COMING.’ It was posted prior to the team’s announcement.

Also included on that post was the hashtag #TrustMeOrTrustTheProcess, which seems like a jab at the Sixers slogan ‘Trust the Process,’ pitting himself against the process; potentially saying that he is ready but the team isn’t.  I could be reading into it too much, but that seems like a bit of subtle frustration coming through.

Could it be that the Sixers want Embiid to have a second surgery but he does not want to have it?

The team has preached patience, but it is completely feasible that a young Embiid would  be against being shelved for a second straight season if he didn’t feel it necessary.  If he knew that he needed the surgery in order to solidify his NBA future, it seems he would be willing and wanting to get it done as soon as possible.

A difference of opinion between the two sides could be a very rational explanation for the delay in surgery, and the lack of information (traditional or via social media) coming from both camps on the topic.