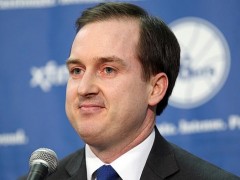 I sat on this post for 24 hours to wait and see if my anger / extreme disappointment with the 76ers franchise and their continued silence on the Joel Embiid surgery front would subside. Needless to say it has not, so it’s time for a rant.

On Tuesday fellow Philadunkia scribe Michael Kaskey-Blomain authored a well crafted post on the questions created by the delays in Joel Embiid’s foot surgery and the 76ers’ silence on said delays.  MKB’s post did a solid job of summing up my frustration with this on going drama.

Yesterday,  John Gonzalez of CSNphilly.com posted an article that provided some clarity (but nothing concrete) on the reasons for the delays in Embiid’s pending surgery.  The article cited “sources” as providing Gonzalez with inside details on why Embiid’s surgery has not happened yet.

Of course the 76ers still have yet to issue an official comment on Gonzaleez’s post, or the delay in general which by the way has now reached to 30 days.

“When asked about the delay, one source said it was partly because Embiid — who is 21 and who, according to president/general manager Sam Hinkie, has been pain-free — was coming to terms with the decision.  The source indicated that Embiid and his confidants wanted more time to review the matter and select a doctor.  A doctor has been chosen, though the source declined to provide that information.

The source said Embiid also reached out to Oklahoma City’s Kevin Durant.  The Thunder star underwent a bone graft on his right foot in late March.  That surgery was performed at the Hospital for Special Surgery in New York City, home to one of at least 12 doctors the Sixers and Embiid have so far consulted about Embiid’s hyper-complicated situation.

When asked whether the surgery would occur in the next week to two weeks, once source would only say that it would happen “in the near future.”

Gonzalez has a solid reputation in this city and I would even be willing to bet that his “sources” on this information came from somewhere within the 76ers organization. That’s how the Sixers and Comcast SportsNet roll.  Thus I have no reason to doubt what Gonzalez published.

Still, this new “inside information” doesn’t satisfy my desire as a journalist and as a member of Philadunkia nation to receive official information from the 76ers on the delays.  IMO we are no closer to getting some answers than we were a week or two weeks ago and that’s completely unacceptable at this point in the game.

In fact the only “official” updates we have gotten on Embiid’s surgery from within the 76ers franchise since Sam Hinkie initial press release back on July 11th have been two Twitter exchanges between  CEO Scott O’Neil and Sixer fans.  The latest exchange came on August 11th after a fan sent O’Neil a Tweet cleverly asking for an update on the situation.  O’Neil response was send the fan a link to a video from the 1980s childrens cartoon The Smurfs.

@ScottONeil its August 11th, did Joel Embiid have surgery yet? Will we be asking the same question on Sept. 11th?

O’Neil’s attempt to bring some humor to the situation probably would have worked with New Jersey Devils fans, but it failed miserably here in Philadunkia nation.  The situation simply isn’t funny any more.

I spoke with two NBA front office contacts on the delays in Embiid’s surgery.  Both of my contacts have been in the League for 20+ years.  The first contact described the delays and the silence from the Sixers as, “simply the strangest player-franchise process I can recall in recent years.”  The second contact said he “admired” everyone involved for gathering as much information as possible  as to what the next step for Embiid should be, but noted that the silence from both parties is “…extremely unusual, especially given the social media world we live in.  Usually one side or the other leaks something concrete out”.

For me the Embiid pending surgery drama has gone way beyond “strange” or “unusual” and has turned into a source of anger and resentment towards the 76ers. The Sixers want us to “Trust the Process”, but are asking us to follow blindly.  I know Hinkie doesn’t care, but at this stage that’s simply unfair to a fan base that has recently suffered through the Tank and then Tank 2.0.

It’s time for Hinkie & Co. to break their silence and end all the speculation surrounding the health of the biggest piece in “the Process”, because I fear that if the Sixers keep the faithful in the dark much longer, the faithful will seek another flock.