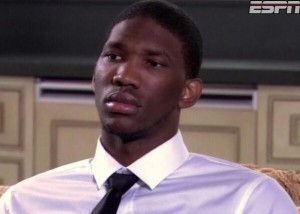 Even though Joel Embiid had a second “successful” surgery on his right foot today (still no official comment from the 76ers organization, just Embiid’s Instagram account) and his basketball future is extremely uncertain, I  maintain that Embiid was still the correct selection for the 76ers at the 2014 NBA Draft.

If the team had passed on some high-level perimeter production in the form of Andrew Wiggins or Jabari Parker, then that would not be the case.  However, as the highly-hyped 2014 Draft played out, only three players looked to have the making of a surefire superstar, and out those three, Embiid was touted by everyone he came across as a generational talent; a guy that could single-handedly transform a franchise.

Unfortunately for the Sixers, they landed in the third selection spot, and an injured Embiid was the available player with the highest ceiling, even if he was also by far the draft’s biggest risk.  You would think that if the Sixers landed the top pick, it may have been Andrew Wiggins coming to Philadelphia, and the whole Embiid saga would be occurring elsewhere.

That is not the case however, and despite recent reports of Boston and Orlando’s pre-draft interest in Embiid, it is the Sixers that have to aid in his recovery.

Looking back though, who should the team have selected instead?  As mentioned, the draft’s two best and NBA-ready players were selected with the first two picks, and after Embiid, no name really jumps out at you after a single season.  Hell, the Sixers had Elfid Peyton, they have Dario Saric, who may still turn out to be the steal of the draft, and they now have Nik Stauskas, who was the 2014 Draft’s 8th overall pick, and possibly its best shooter.  The team also added Jerami Grant, K.J. McDaniels, and Jordan McRae in that Draft.

Sure, Julius Randle could be a very solid NBA player, and Marcus Smart had a solid season for the Celtics, but guys like that come around pretty frequently, compared to a nimble, athletic, potentially franchise-changing big man.  Selecting Embiid was a big gamble on the part of Sam Hinkie and the Sixers, but it is a decision that is mollified by the fact that the draft’s top talents were already off of the board, and the draft’s superstar potential dropped significantly after Embiid.  If the Sixers didn’t select Embiid, another team in the top eight would have, despite his injuries. His potential is that expansive.

In five years, if Embiid is never able to contribute consistently, and Randle, Smart, and T.J. Warren have developed into superstars, it will be fair to look back and say, ‘yeah, Embiid was the wrong selection in that scenario.’  But, on the other hand, if he is able to eventually recover and he develops into the dominance force many expected him to become, it will be Hinkie and the Sixers reaping the benefits.

The phrase ‘best available’ is worn out, but it is truly what Embiid was in that scenario.  He was a high-risk, high-reward pick, and it it still too early to tell which way the gamble tilts.  You have to like an ownership group and a front office with the testicular fortitude to take such a risk regardless.  Some pay off, some don’.  If the team passed up on a talent like Andrew Wiggins to gamble on an injured Embiid, that would be one thing, but in the absence of other surefire superstar talent – which is of course central to the Sixers’ rebuild – the Embiid selection remains the right one.

Editor’s Note:  A number of hours after we posted this story, the 76ers finally released an official statement on Embiid’s second surgery.