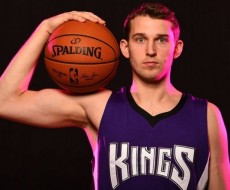 Sam Hinkie and the 76ers were non-factors on the free agency market this summer and instead chose to add to their roster in other ways.

With the No. 3 overall pick at the 2015 NBA Draft Hinkie added Jahlil Okafor, a 6-10, polished post player with an NCAA championship ring.  Okafor showed some flashes of greatness during summer league action in Las Vegas and it appears that the Sixers have another solid player to help rebuild this franchise.

The other news worthy addition was shooting guard Nik Stauskas who came to the Sixers via a trade with the Sacramento Kings. Stauskas had a disappointing rookie season in Sacto that featured limited minutes and a coaching change.  He also did not suit up for the 7-6 at the 2015 NBA Summer League.  Thus Stauskas and exactly what he can do for the Sixers remains somewhat of a mystery for Philadunkia nation.

In an effort to shed some light on what can be expected from Stauskas this season, I reached out to several of my NBA contacts as well as Jason Jones, the Kings beat writer for the Sacramento Bee.  For your reading pleasure, I present their inside analysis on Stauskas.

The following is what four NBA front office types/scouts had to say about Stauskas.  Of course they all asked to remain anonymous…

I asked one NBA Western Conference personnel executive if he liked Stauskas for the Sixers.  Via text he said:

“Yes.  He was in a bad situation in Sacto.  Brown and company can develop him some.  He’s no all-star, but if they have 4 good players around him, he will be effective in Philly.”

An NBA Western Conference scout text’d me the following quote when I asked about Stauskas:

“If he’s the 5th best starter in Philly, this move could work out for them.  He was buried in Sacto by drama in the locker room and chaos within the organization.  Look at the improvement he saw when George Karl took over.  He can continue to improve his level of play in Philly.”

One Eastern Conference scout I contacted gave me the below analysis of Stauskas:

“He certainly was drafted into a mess of a situation with the Kings, so the stable leadership in Philly will help him tremendously.  However, if they are counting on him to be a star level player in Philly, they are dreaming.  He’ll need great talent around him to be even an effective to very good player.”

Finally, an Eastern Conference personnel executive had these interesting comments on Stauskas:

“I’m not in love with him…I question if he has the skills and quickness to stick in this League.  But if he is going to make it, Philly may be the right spot for him to do it. They love the three ball there.  He’ll certainly get plenty of minutes.  Plus they have Okafor and Noel on the inside to open up the perimeter game.  Again, I’m not a huge fan, but it could be a great match for both…”

Q&A with Jason Jones of the Sacramento Bee…

Philadunkia:  You saw Stauskas on nightly basis last season.  What impressed you the most about his game?

Jones:  It’s hard to say what impressed me about Stauskas most of the season. He admittedly struggled with his confidence and spent most of the season in a slump.  He showed flashes of being a good shooter, but his playing time was inconsistent and he had to play for three coaches.  At his best, Nik plays with a swagger that can be infectious.

Philadunkia:  Stauskas was a highly rated player in the 2014 Draft and a number of teams inquired about trading for him this summer.  Thus it would seem that NBA types believe he can contribute in this League.  So what kept Stauskas from getting significant minutes in Sacto as a rookie?

Jones:  Stauskas didn’t play much because he wasn’t playing well when he did play.  He seemed to have more confidence in summer league and early in the preseason.  He was struggling with his shot and defensively.  A lot of the struggles had to do with being a rookie, but the Kings’ unstable situation last season did not help him at all.

Philadunkia:  Stauskas is entering his second year in the League and he obviously has some elements of his game that need improvement.  From what you saw/heard in 2014-15, does he have the work ethic and drive to push himself to further develop his skill sets?

Jones:  One of the concerns about Stauskas was whether he knows how hard he has to work to succeed in the NBA.  But in his defense, he didn’t have an environment conducive to learning how to succeed last season.  But I think he can show the work ethic next season.

Philadunkia: The stats indicate that Stauskas’ play improved during March and April.  Was it simply a matter of increased minutes or did you notice a change / some development in his game?

Jones:  Increased playing time and George Karl’s style of play helped Stauskas’ numbers improve late in the season.  He felt that style fit him best, because the ball moved more and it allowed him to be more of a playmaker.  He looked more relaxed at the end of the season, too.

Here’s my quick take from the above people I spoke/texted/emailed with: