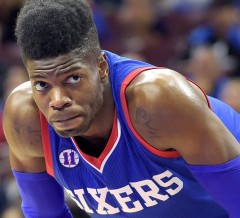 After a solid rookie campaign in which he was the only player in the League to finish with over 100 blocks and over 100 steals, Nerlens Noel has some high aspirations for his second season.  Among them, is to become an All-Star.  The Sixers have been without an All-Star since Jrue Holiday made the team back in 2013, and Noel wants to end that streak.

“Year two, I want to be an All-Star, clear as that,” he recently told SLAM magazine; a sentiment he has often echoed in the past.  “I know a lot of players say that,” Noel told me back in April, “but for me I feel as though that it the next step.”

The formidable forward spent the summer fine-tuning his game, especially on the offensive end, where there is obvious room for growth.  Noel has been working to improve his jump-shot since before his selection by the Sixers in 2013, and that continued to be a central aspect of work throughout his summer sessions.

“I think it’s really going to help me as a basketball player overall, especially at [power forward],” Noel told The Inquirer’s Keith Pompey of his daily workouts.  “It will help space the floor with my ability to start hitting the jumper consistently and complement our whole offense.”

Adding a consistent 15-foot jumper would exponentially expand Noel’s ability to impact the offense end, as he is already a proficient finisher around the rim.  Adding such a shot would force defenders to follow him out of the paint, in turn opening up the area for Noel and his teammates.  This could become especially important with Jahlil Okafor on the floor, as he often does his damage from inside the painted area.  A solid-shooting Noel could provide the perfect complement to the potential Rookie of the Year candidate.

Noel already displayed flashes of defensive dominance throughout his rookie campaign, and he projects to be one of the league’s best on that end of the ball for years to come.  If his offense can develop to the point of consistent, reliable production, he could grow into one of the best young forwards in the game. Though he is extremely self-motivated, as evidenced by his All-Star aspirations, his overall goals remain team-oriented.

“We worked hard this summer.  I think I’m in a good position to help [the Sixers] move in the right direction,” Noel told Pompey.

With his dominant defensive ability and improving offensive skill-stet, Noel figures to play a key role as the Sixers continue their climb to contention.  It would not be shocking to see the former Kentucky Wildcat average a double-double for the Sixers this season, and maybe get that first All-Star bid.