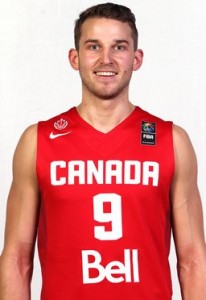 If you follow this site’s Twitter account (@philadunkia) then you know that during late August and into September we closely tracked the play of Nik Stauskas for Team Canada on the international basketball circuit. First, Stauskas and Team Canada laced ’em up at the Tuto Marchand Cup in Puerto Rico where Team Canada produced a 4-0 record despite sub-par play from Sam Hinkie’s prized off-season acquisition.

Next, Team Canada traveled to Mexico City for the 2015 FIBA Americas Championship event. Something in Mexico must have agreed with Stauskas as the shooting guard found his game South of the Border.  His sharp shooting helped push Team Canada to a 6-1 record in preliminary play and an appearance in the tournament’s semi-finals.  Thanks to a case of food posioning, Stauskas saw limited action in that semi-final game and Team Canada got upset by Venezuela.

FIBA PLAY RECAP:  Stauskas and Team Canada began their month long stretch of international play at the 2015 Turo Marachand Cup in San Juan, Puerto Rico.  As I mentioned in the open to this post, Stauskas did not play well in Puerto Rico. Specifically it was his shooting stroke that failed him in Marchand Cup play. Stauskas shot 28% on his 2-point attempts (6-21); 28% on his 3-point shots (4-14) and 67% from the free throw line (2-3).  In the two games I was able to watch online I didn’t notice any issues with his mechanics, so I don’t have a technical explanation for his shooting woes in Puerto Rico.

I did take note of three things on Nik from Marchand Cup action.  First, Stauskas received limited minutes (19 mpg.) and limited touches on what is a very talented Team Canada squad.  Second, when he was in the game, Stauskas ran at the small forward spot with Andrew Wiggins playing the role of shooting guard/combo guard. Lastly, Stauskas played very conservatively and lacked an aggressive edge.  It’s possible that the combination of these items produced a poor shooting tournament for Stauskas.

When Team Canada moved on to Mexico City for the FIBA Americas Championship, Stauskas rediscovered his stroke and his game. Stauskas slid into the starting lineup during this event,appeared more comfortable with his role and responded with significantly improved all-around play.  Despite being the 3rd / sometimes 4th option on offense for Team Canada, he managed to average 12 points per contest thanks to 53% shooting from the field and 50% from three.  The one pause for concern at FIBA Americas was his 1-7 shooting night from three against a weak Cuban team.

However, overall his play was outstanding and included in this run of improved play was a 16 point effort against Venezuela in which Stauskas went 4-5 from deep.  At FIBA Americas I also felt he also displayed an ability to run the half-court offense and set up teammates for easy buckets.  Now I know this is FIBA action and not the NBA, but the what really jumped out to me about Nik’s play at FIBA Americas was how he attacked off the dribble on offense and didn’t settle for the jump shot every time he caught the rock. During this FIBA event, Nik frequently used the dribble to create opportunities for teammates.  By the end of 2nd round play, Stauskas was rolling, so it’s really a shame he missed most of the semi-final game and all of the 3rd place game with food poisoning.

The following is what two of my NBA contacts had to say via text about Stauskas’ play for Team Canada over the last month.  Of course they both asked to remain anonymous…

1) “(Stauskas) played really well once he got his confidence.  He lost it in Sacto so it took some time for him to regain it.  Has improved (on defense) and is a very good team defender.  Surprised me to see he could be a secondary ball handler and take the pressure off the point when needed.”

2) “Once he got comfortable, his play for Canada improved dramatically.  He’s a very nice luxury to have on offense as he doesn’t dominate the ball and can still get you points as a 3rd or 4th option.  More athletic than I recalled.  Needs a system to succeed. That’s why his play improved under Karl in Sacto and it’s the reason he played great for Canada.”

Philadunkia:  After a sub-par performance at the Marchand Cup (4.5 ppg.), Stauskas raised the level of his game and became a positive contributor for Team Canada (12 ppg.) at the 2015 FIBA Americas Champ. Can you pinpoint one or two items that he did really well in Mexico and may have been responsible for his improved play?

Callum Ng:  In the first game loss to Argentina, everyone was out of rhythm. For one I think shooters like Stauskas and Brady Heslip benefited from the broader team contributing points early, taking the pressure off them. Secondly, Stauskas’ shot selection was good, at least until the loss to Venezuela. Biggest deal? The guy didn’t miss from the line, 25 for 25.

Ryan Wolstat:  His shots weren’t falling in Puerto Rico, so he tried to contribute in other ways, namely by rebounding and playing well defensively.  In Mexico, he put it all together and combined good shooting with those other two aspects.  He also handled the ball a bit.  He hit some big shots at big moments and I think that helped his confidence.

Philadunkia:  I am hearing that Stauskas has been working on his ability to score off the dribble.  Did you see any evidence of improvement in that area for Stauskas during FIBA Americas action?

Callum Ng:  In the international game, teams take liberties. Off the dribble, or even static shots are more often impeded…let’s say aggressively in some cases. I can’t speak to his skill focus but I can say that a 12 PPG average was done in a hostile environment. Notwithstanding the varied ability of some countries.

Ryan Wolstat:  He’s always had that ability. It started the year Michigan made the Final Four but was especially noticeable the next year when he won conference player of the year. With Trey Burke gone, he played a fair bit of point and that developed his skills and made him a better player.  For Canada, he was asked to initiate the offense at times and was able to either find teammates or get to the hoop a few times.  He had some big dunks that got his teammates pretty excited, but he’s actually an underrated athlete.  He’s not super quick but he isn’t slow either and definitely has the skills and feel for the game to be a lot more than just a shooter.

Philadunkia:  You both know basektball, so based on what you saw from Stauskas in Mexico, in your opinion, is he at a level where he can be an effective starting shooting guard in the League?

Callum Ng:  I don’t cover the NBA regularly, but what I can say is this tournament was excellent for many players ahead of their pro seasons. How rare is it to play meaningful basketball in September? There’s no question it helped Stauskas, and his teammates. He certainly made some FIBA defences look elementary. Confident, mature, always thinking.

Ryan Wolstat:  It’s just not a big enough sample size to say, but he was one of the five or six best players in the entire tournament before getting food poisoning.

In any other city I’d say no, but in Philly, why not give him a shot?  I think he’d benefit from more time as a backup that actually gets minutes, but it makes more sense for the Sixers to start him.  Brett Brown is a very good coach and my bet is Stauskas shines there. Whether he’s a full-time starter or a good sixth man, I expect Stauskas to have a solid NBA career.

Thanks to Callum and Ryan for their time and answers.