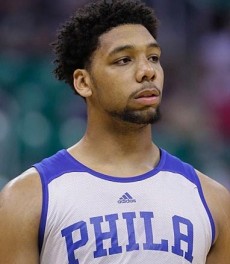 This past summer Jahlil Okafor experienced a pretty shocking fall from his perch in the top spot in the 2015 NBA Draft class.  Now, it’s not as if he fell out of the Lottery or anything of that magnitude.  But somehow after entering college as the top player in his recruiting class, showing up at Duke in the best shape of his life, and winning a national championship, he actually lost ground in the eyes of many scouts and “experts”.  Okafor didn’t just fall behind No.1 overall pick Karl-Anthony Towns, but he slipped below also to D’Angelo Russell, whom the Lakers selected with the second pick at Draft15.

For Philadunkia nation, who on Draft Night 2015 watched as Okafor—yet another big man who’s been labeled as having nearly unlimited potential — fell into Sam Hinkie’s lap, this is old news.   Still, I wanted to remind everyone of these events because I believe that Okafor’s mysterious decline in draft status this past June may turn out to be the best thing that happens to the Sixers during this rebuilding process.

I say this because I feel Okafor could develop into the best player in his draft class.  In fact, there are already a number of reasons to believe he’ll begin what should be a pretty incredible career by winning the 2015-16 NBA Rookie of the Year Award.

The most obvious reason for these expectations is that, unfortunately, the Sixers will still play in 2015-16 with a roster full of starters who would be on the bench on most teams, and reserves who should be in the D-League.  As it did for Michael Carter-Williams two years ago (when he won Rookie of the Year), this should open up a gigantic opportunity for Okafor, purely from a statistical standpoint.  It’s the whole “someone has to score” argument.  Today’s Fastbreak did a fairly in-depth analysis of what to expect statistically from Okafor, noting his potential as a “20 and 10 guy” but ultimately landing on 16-17 points per game as a realistic expectation.  That should lead the team, and likely all rookies, in scoring, and it doesn’t address the fact that Okafor could approach averaging a double-double as well.

Perhaps because of statistical projections like this, it’s also fair to point out that Okafor is considered to be among the odds-on favorites to take home the award.  As part of Betfair’s analysis, which is already updated to reflect odds for certain awards and achievements for the upcoming season, Okafor is actually being given the second-best odds, behind only Denver point guard Emmanuel Mudiay and ahead of both Towns and Russell.  This is a very early projection and is certainly subject to change, but it shows how highly the people whose job it is to handicap such conversations view Okafor.

Perhaps even more relevant than the opinions of the oddsmakers is the consensus opinion of Okafor’s peers.  In seeking a player perspective on which of the latest young stars heading into the league is likeliest to take home Rookie of the Year honors, NBA.com’s annual rookie survey showed that players see Okafor as the favorite for the award.  They also see him as a better long-term prospect than Towns.  We shouldn’t go hanging his jersey in the rafters yet, but keep in mind just how much young players these days see of each other at elite camps, summer leagues, on the AAU scene and prep school competitions before they even get to college.  These kids know Okafor better than any analyst or oddsmaker, and they like what they see.

Finally, there’s the on-court playing style to consider.  While the Carter-Williams ROY win demonstrated to Sixers fans that the Rookie of the Year award is largely about pure statistical output, it’s also important for a player to fill an important functional role for his team.  In this regard, Okafor is actually set up pretty well.  Granted, no one with the passing ability of Chris Paul will be feeding him the ball from the top of the key, but in the paint he should have incredible freedom to operate. The ongoing nature of the Joel Embiid’s injury, while unfortunate for the 7-6 as a whole, has unclogged the lineup and allows Okafor free reign as the team’s scoring big man. Meanwhile, as Sporting News articulated in some detail, fellow young big man Nerlens Noel might just be an ideal complement to “Big Jah.”  While it’s a little bit of an oversimplification to say it this way, Noel is the defensive specialist counterpart to Okafor’s offensive brilliance.  If these two get in a rhythm and work off each other, Okafor is going to look spectacular.

With all of this considered, and given good health, Okafor should have a spectacular first season in the NBA and possibly win the Rookie of the Year Award.