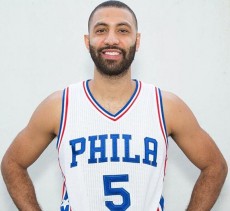 During the last four days of training camp action over at Stockton University,  several pieces appear to have fallen into place for the Brett Brown’s 2015-16 lineup and rotations.  However the point guard position remains a mystery wrapped in an enigma.

“I think it’s the greatest mystery on our team right now,” Coach Brown said about the on the point guard rotation to the media gathered after practice on Wednesday.  In a gathering with beat reporters on Thursday Sam Hinkie stated the obvious — there’s a battle for the point guard spots this preseason, saying “People talk the most about the point guards.  We’ve got six and there’s going to be a heck of a battle to see which ones end up on the team.”

Training camp breaks on Saturday.  The seven game preseason stretch begins on Tuesday against the Wizards in Washington.  The 2015-16 regular season tips off in 26 days.  That means the Sixers’ lead guard prospects have a little over three weeks to show Brown and Hinkie what they can do and claim one of the point guard spots on this roster.  At least for the opening week of the season.

Some members of Philadunki nation thought that the team had actually found its point guard of the future when 2013-14 NBA Rookie of the Year, Michael Carter-Williams returned to his starting sot for 2014-15.  But Hinkie was not among those who believed in MCW’s long range potential, so he trade the 23-year old to Milwaukee last February.

Since the Carter-Williams trade Brett Brown has employed a turnstile approach to the lead guard position.  Isaiah Canaan had his crack at the starting spot, as did Ish Smith (Let’s not forget the cups of coffee Tim Frazier and Larry Drew had with the Sixers as well.).  Canaan and Smith did decently, but not enough to guarantee themselves a spot moving forward.  In fact the Sixers let Smith simply walk away and sign a non-guaranteed deal with the Wizards.

The team also chose not not to address the position in the draft, or through free agency (outside of the small-scale Marshall deal), and instead will have a handful of potentially promising young prospects and journeymen competing for the starting and backup point guard spots at camp and throughout the preseason.

*coming off of a major injury

Once the roster is trimmed to 15, the team is expected to carry three point guards. The question is, which three out of that group will make the cut?

Realistically, none of them are long-term starting options; something the team will eventually have to add – either through free agency (there is a whole lot of talented point guards across the league’s landscape currently), or through the 2016 Draft, where the Sixers could potentially have four first round picks. Until then however, a combination of the above listed players will have to hold down the spot, and hopefully use the opportunity to show their value going forward.

My gut guess is that Wroten, Marshall, and Jackson will be the three to make the roster, although all three are coming off of serious injury issues, Still, the team knows what Wroten can do, as he is the their best at taking the ball to the basket.  He can create his own offense, which will be important for the team this season.  Even if there is no long-term future for Wroten in Philly, there would be some value for him in a trade.  I don’t see him not being on the roster.

Kendall Marshall is the best passer of the group, and a guy that potentially makes a lot of sense as a backup down the line.  He can distribute the ball well, and as the Sixers continue to add top-tier talent, that will become increasingly important.  Marshall excels in the open court, and can execute on the break, and we all know the Sixers emphasize getting out and running.  Marshall can also knock down open opportunities, which will be very important to space the floor as Okafor and Noel draw attention in the post.  While his game is limited, Marshall is potentially the best pure point of the group, and brings an elite skill set to the team.

The third spot is open, although I expect it go to either Pierre Jackson or Isaiah Canaan.  Jackson is a guy that the team liked last year prior to his injury, and they obviously still like him, as they brought him in this summer.  They may very well want to give Jackson a try in the system to see what he can do, as Canaan was already afforded his ‘tryout’ with the team last year.  Canaan played in 22 games for the Sixers last season, so the organization has a feel for what they can get out of him, good or bad.  The main thing working in Canaan’s favor is his three-point shooting, as he demonstrated his ability to be lethal from long-range.  The team certainly needs guys that can shoot from the perimeter, especially with Okafor, Noel, and (maybe) Embiid on the block, so it will likely come down to how much they value that particular skill in Canaan if he returns to the roster or not.

Wilbekin and McConnell seem to be extreme long shots, but they will certainly have their opportunity.  As training camp wraps up and we head into the preseason, the Sixers’ point guard wars remain extremely interesting.