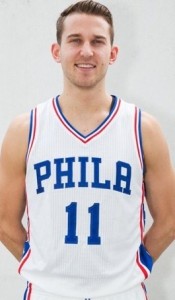 The 76ers announced on Monday that shooting guard Nik Stauskas has been diagnosed with a right tibia stress reaction, but will only be sidelined for the next two weeks as a “precautionary” measure.  Brett Brown maintained that despite the injury, Stauskas should be ready for the season opener later this month.

After practice yesterday Stauskas himself commented to a group of media members (Including Philadunkia’s @therealmkbizzy), “Obviously this is a little bit of a setback, but I’m not too worried about it.”

Raise your hand if you have heard these lines come out of the 76ers’ practice facility in the last few years.

While each injury is unique and each player heals differently, the Sixers and Stauskas may want to pump the brakes on a quick return to action for #11.

While no one at the 76ers is directly linking this stress reaction to Nik’s time with Team Canada during August and September, it seems safe to assume that playing in the Marchand Cup and the FIBA Americas Championship for his home country had a role in this injury. “You learn this over your years with those players that play international FIBA basketball: The Tournament of Americas . . . is a grind,” Brown said at PCOM on Monday.  “That’s a real tournament.  And so maybe some of it is a result of that.”

Stauskas commented that he didn’t remember  “getting hit” or a “specific play” where it happened during training camp last Thursday when the injury first surfaced.  “It just progressively got worse and the trainers pulled me out of practice.  We checked it out and decided it was best for me to get some rest.”

Rest is certainly the chosen treatment path by athletic trainers and NBA doctors for a stress reaction in the tibia (the inner and typically larger of the two bones between the knee and the ankle).  Surgery is considered a last resort.  The question is how long will Stauskas need to rest because of this injury.  If you review two of the more publicized recent cases of NBA players who have experienced this injury, one could conclude that Stauskas will be resting a lot longer than the two weeks the Sixers are predicting and surgery may be in his future.

One recent example is that of journeyman big man JaVale McGee.  In November of 2013 while on the Denver Nuggets roster, McGee was diagnosed with a stress reaction in his left tibia.  Despite being immediately shelved by the Nuggs to rest, the pain in McGee’s leg lingered through the first four months of the 2013-14 season causing McGee to sit out until after that season’s All-Star Break.  Finally in late February of 2014 McGee underwent surgery to repair the fractured bone and the Nuggs announced he was out for the remainder of the 2013-14 season.  But McGee’s tibia problem didn’t stop in 2013-14 season.  Ohh, no.  The center also missed the majority of 2014-15 with lingering soreness in his surgically repaired tibia.  In fact he played in just 28 games over that two year span because of a stress reaction in his left tibia.  Ironically, the Mavericks just announced two days ago that McGee would, “sit out the Mavs’ preseason opener Tuesday against the Warriors…McGee is still working his way back from a stress reaction in his left tibia that has limited his availability each of the past two seasons.”

McGee’s case is certainly alarming and possibly an example of the worst case scenario.  Additionally, the Sixer fan in me notes that NBA bigs suffer these injuries all the time and Stauskas is a 6’6; 205 pound shooting guard.  Thus, McGee’s case is not causing me much concern.  However, former 76er Jrue Holiday (6’4; 205 lbs.) and his tibia stress reaction saga makes me sick to my stomach over the Stauskas injury.

ICYMI:  In January 2014 Holiday was diagnosed with a stress reaction in his right tibia.  After resting and rehabbing, Holiday made an attempt at a comeback but was unsuccessful.  Ultimately Holiday had surgery to implant a steel rod in his right tibia and missed the remainder of the 2013-14 season.

Holiday returned to the Pelicans lineup from October thru December on the 2014-15 season.  However, Holiday was experiencing off and on pain in his right leg during that stretch and in early January of 2015 (almost a year to the day of the original diagnosis) Holiday was again diagnosed with a stress reaction in his right tibia.  The issue had returned.

More rest and rehab was prescribed for Holiday and he sat out the remainder of the Pels’ games during January.  In February, Holiday aggravated the stress reaction injury in his lower right leg and he was sidelined for that month as well as March and early April of 2015.  He returned in time to make limited appearances in the Pels’ short lived playoff series against eventual champions, GSW.  Over the past two seasons, Holiday has missed 90 games because of his tibia injury.

In May 2015 Holiday underwent successful surgery to remove a screw from his surgically repaired lower right leg and he spent this past summer resting and rehabbing.  It’s now mid-October and despite being “pain-free” and receiving a clean bill of health from team doctors, the Pels are being very cautious with Holiday.  Head coach Alvin Gentry recently told the media that Holiday will be capped at around 10 minutes per game during the preseason.  Once the regular season begins, Gentry said that the former 76er would receive only 15 minutes per night through January. Lastly, Gentry noted to the media that the Pels plan to hold Holiday out for one game of back-to-back scenarios for the foreseeable future.  In short, it has been ugly for Holiday and the Pelicans since his stress reaction diagnosis.

Again, each tibia injury is unique and athletes’ bodies heal at different rates, so I’m not saying these brutal scenarios will play out for Stauskas.  But we are all witness to the 76ers’ luck with lower body injuries, so I just wanted to make you aware of the possible prolonged nightmare a stress reaction in the tibia can produce.