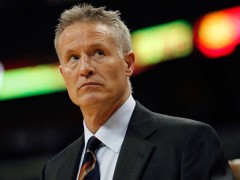 In year three of Sam Hinkie’s “process” I am fully expecting the 76ers to take a noticeable step forward on the court.  The additions of Jahlil Okafor, Nik Stauskas and Kendall Marshall as well as training camp surprise Christian Wood have provided Brett Brown with a much deeper roster than he has had in the last two seasons of this rebuilding process.  Additionally, with a year of seasoning under his belt and an improved jump shot, Nerlens Noel’s should be ready to contribute on offense from the opening game of the season.  Lastly, I am expecting Robert Covington to take his game to the next level.

The combination of added talent and improvement among the players who return from the 2014-15 season should provide for better results on the court — 25 wins is a distinct possibility.  However I am writing this post to warn Philadunkia nation that because of injuries, learning to play together and an unfriendly opening month of the NBA schedule, a high level of patience with this team may be required at the start of 2015-16.

Injuries:  First, let’s take a quick look at the loooong list of injuries that have reduced the Brett Brown’s preseason roster to 9-11 healthy bodies on any given day.

Backcourt:  Tony Wroten (out until December) and Kendall Marshall (out until mid-November) were the lead candidates to win the starting point guard spot, but neither of them will see game action for some time.  Nik Stauskas was penciled in as the starting shooting guard, but a stress reaction in his tibia has sidelined him for the last two weeks.  Stauskas has been cleared to workout (shooting and running) and told the media on Sunday, “I would like to play a preseason game, but if the doctors or our training staff doesn’t feel that that’s the right move for me, then that’s the not the right move.  Before I play an actual game, I’ll definitely be with the team for a little bit.  I’ll make sure that I’m ready.”

We all know that during the rebuilding process the Sixers medical staff has been overly cautious with treating injuries and given the history of how stress reactions can linger with NBA players, I don’t expect that we will see Stauskas anytime soon.  Lastly, reserve guard Pierre Jackson continues to recover from his series of injuries.

Frontcourt:  No matter how he wants to shape it to the media, there is something wrong with Jahlil Okafor’s knee.  Jah was held out of Friday’s preseason game vs. Washington and looked slow in limited action on Sunday against the Nets.  Yes, the Sixer rookie did score 14 points in 20 minutes against Brooklyn, but anyone who says he looked 100% healthy is lying.  Brown has reassured everyone that Jah will be ready to go for the season opener, the question is at what level will he be playing as the regular season tips off?  If he’s at less than 100% in the opening month, the Sixers are in trouble.

Learning Curve:  The Sixers’ opening night roster will likely only boast 5 players (Noel; Covington; Thompson; Sampson; Grant) who have played together and in Brown’s systems for a significant number of NBA regular season games.  And three of those players are reserves.  Even if everyone was healthy during training camp, Brown had the task of educating numerous rookies and new acquisitions on how he wants the 76ers to play at both ends of the floor in 2015-16.  That’s a monumental job for even the best NBA coach.

Given that the76ers have looked like a MASH unit during TC and the preseason, I have to believe there is no way Brown has accomplished this task to his own high standards (so far).  Thus I expect there to be a significant adjustment period during the opening month of the season as most of this roster learns on the fly how Brown wants them to execute on the floor.  That learning process will only be further complicated as players get healthy and Brown has to incorporate those individuals into his rotations.  Philadunkia nation should anticipate significant growing pains for this team between October 28th and November 29th.

The Schedule:  The NBA scheduling gods did not do the beat up and new to each other 76ers any favors in 2015-16.  The opening month of the Sixers features 11 games (out of 18) against teams that made the playoffs in 2014-15.  Included in that list of challenging contests vs. last year’s playoff teams are two games against Cleveland and road games against Western Conference powers San Antonio, Houston and Memphis.  The contest vs. the Spurs is the second game of a back-to-back road set that tips off in OKC.

Speaking of the Thunder, a healthy Kevin Durant & Co. headline the list of opponents for the Sixers in the opening month of the season that did NOT make the playoffs in 2014-15.  Also featured on that list are the improved Miami Heat as well as Andrew Wiggins and the Minnesota Timberwolves.

One last scheduling fact:  The Sixers have 11 road games in the opening month, the majority of which comes in the form of a 6-game road trip that closes out November.  My lord, the first month of the schedule will be a very difficult grind for the 7-6.

In short, at the opening of year three in the “process” a perfect storm has come together that will provide a mighty test for the 76ers on the court as well as Philadunkia nation on our couches.  Thus I plead with you to show some patience early on in the 2015-16 season.  If you do, I am betting that your faith will be rewarded by Christmas time.