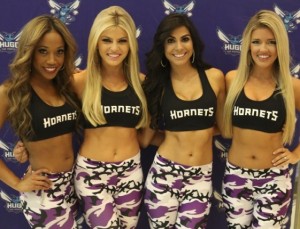 This edition of “Fo’ with the Foes” – Philadunkia’s advanced scouting series, which with the help of an accomplished journalist from around the NBA beat or blog world, previews key upcoming 76ers games – features tonight’s opponent, the Charlotte Hornets (6-6), who have won 6-of-their-last-9 and feature a rejuvenated Nicholas Batum as well as our man Spencer Hawes.

After the jump, I’ll look at Fo’ key items for tonight’s game. Additionally, we’ll get a little more insight into this Charlotte team the Sixers face tonight from our colleague Spencer Percy at queencityhoops.com, as Spencer will answer Fo’ questions on his Hornets squad from us here at Philadunkia.

1)  The Sixers to Show Some Heart:  Simply put, the performance by the 76ers on Wednesday night against the Pacers was utterly pathetic and can not happen again.  NEVER again.  However, I believe the players are aware of that fact — “We are 0-12, but the way we lost tonight isn’t acceptable,” Okafor said after the debacle vs. Indy — so I am looking to see the Sixers reach down and produce a respectable effort tonight.  If this group of rookies and undervalued assets comes out tonight and lays another egg, it could be a sign that the losing has gotten to this group which would make for a long, long season.

2)  Hornets on Offense:  Steve Clifford’s team runs one of the most efficient offenses in the Association and turns the ball over the FEWEST times per night — 11 per game (more on this later).  They also feature smooth 3-point shooting wing players in Batum (43%), Marvin Williams (38%) and Kemba Walker (37%).  Jeremy Lin’s stroke has gone missing early on this season (28%), but he is a career 34.6% shooter from deep.  In short,  unlike the 76ers, the Hornets are a joy to watch offense and I hope the Sixers coaching staff takes notes.

3)  Proof of Life from Stauskas:   Stauskas is stuck in an epic shooting slump, especially from behind the arc — 5-for-his-last-21 (23%). He was held scoreless (0-4 FG, 0-2 3Pt) in Monday’s game against the Mavericks and posted only 7 points vs. the Pacers on Wednesday night.  Stauskas continues to start, but Brown has pulled back on Sauce Castillo’s minutes of late — 21 minutes or less in each of the last 4 games.  Tonight, Stauskas needs to come out, hit a few threes and show he can help this team spread the floor in order to limit the double teams Okafor has been receiving lately.  If Stauskas has another poor showing again tonight, I will have a hard time agreeing with Brown that he deserves to continue starting.

4)  Sixers Bigs vs. Al Jefferson:  It’s no secret that Al Jefferson had a slow start to the 2015-16 season.  However over the last three games he seems to have found his stride including a 29 & 5 night vs. Portland and a 18 & 8 outing against the Nets on Wednesday. Al may not be back to his vintage dominating self just yet, but I still don’t believe Okafor or any other Sixer big can stop Jefferson on his own.  So I am interested to see what (if any) schemes Brown uses to keep “Big Al” from having a big game tonight.  The Hornets ability to shoot the three, will make giving Okafor continuous help on Jefferson very tricky, so Brown will have to get creative on defense.

Q&A with Spencer Percy at queencityhoops.com:

Philadunkia:  The Hornets have won 6 of 9 and now stand at .500. What have been one or two of the keys to the recent winning ways?

Spencer Percy at queencityhoops.com:  Offensive efficiency and a strong bench.  This season’s version of the Hornets come at you by committee at the offensive end.  Kemba is experiencing career high shooting numbers, Nic Batum has been everything Charlotte hoped and the roster is finally built to give Al Jefferson plenty of space to operate on the left block.  It’s still a work in progress for the first unit, but there isn’t as much pressure on Kemba to take terrible mid-range jump shots and Jefferson can’t hold the offensive flow hostage – both due to the addition of Batum and a bevvy of three-point shooters.

Charlotte has one of the deepest benches in all the league, spearheaded by Jeremy Lin and Jeremy Lamb. Lin and Lamb average a combined 24.3 PPG off the bench this season, which ranks first among Eastern Conference back court duos. Lin is earning just north $2-mil for the next two seasons and the Hornets just made a small gamble on Lamb by extending him for $21-mil over three years, which currently looks like a heist. Two incredible bargains for one of the best bench duos in the Association.

Philadunkia:  Early on this season, what’s been the most pleasant surprise for the Hornets?

Spencer Percy at queencityhoops.com:  The offensive improvement. Charlotte has been a consistent bottom-five offense since the ’13-’14 Bobcats (R.I.P.), but those days are long gone.  The addition of Batum, Lamb, Lin, Hawes and Kaminsky have altered the complexion of this roster and the style of play.  The basketball pops around the floor much more often, combined with a simple dribble-drive-kick concept. Charlotte is 6th in the NBA at 3PA per (26.5) and 8th in 3FG% (35.8%).

Philadunkia:  The Hornets boast the lowest turnover rate in the Association and one of the most efficient offenses. How did head coach Steve Clifford get this team to buy into playing his style of basketball?

Spencer Percy at queencityhoops.com:  Clifford has proved in his first two seasons in Charlotte that he can coach a group of guys to defend on a string, but he’s certainly earning his stripes on the offensive end this season.  Clifford coached under Stan Van Gundy in Orlando during the four out-one in Dwight Howard / Hedo Turkoglu hay-days, so this is presumably the style he wants to play offensively.  This change in style is clearly due to personnel above all else, but it’s nice to see Clifford viewed as more than a defensive savant in the League as it’s currently constructed.

Philadunkia:  Nicholas Batum was a nice off-season acquisition by the Hornets.  From a distance it seems that he has rebounded nicely from a down 2014-15 season in Portland.  Tell us a little about Batum’s play this season.

Spencer Percy at queencityhoops.com:  Batum has been a Godsend. I originally thought that he was going to have a tough time adjusting to being the number-one offensive option because that was far from his role in Portland, but he’s relishing in the new expectations.  He is no longer a corner spacer.  The Hornets run him off a band of screens every night and will use Batum to initiate the offense as well.  Current shooting splits (FG%, 3FG%, FT%) of 45.6, 43.8 & 87.2 are bound to drop, but the hot start can only be a positive for Batum’s confidence within the new role.