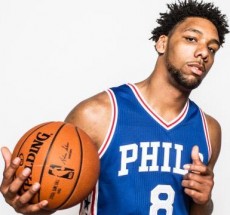 Despite not having won a game this season, the 76ers have displayed a great deal of heart and fight on the court every night.  Now it appears they can fight off-the-court as well.

Unless you fell into a post-Thanksgiving dinner coma, you aware that TMZ Sports has posted a grainy cell phone video showing 76ers’ rookie Jhalil Okafor punching out a heckler in the streets of Boston late on Wednesday night.

The “fight” (in the video it looks like only 2 punches were thrown) came after a very tough loss by the Sixers to the Celtics in which Jah and Co. blew a late fourth quarter lead and suffered their 16th straight loss of the season.  Okafor scored 19 points in the loss up in Boston and during a post game night on the town, he was apparently in no mood to be clowned on by a Boston faithful.

TMZ is also reporting an Okafor representative told the website, “he was being heckled from the moment he left the club and felt threatened because people swarmed him on the street.”  The Okafor representative also claimed that Okafor was with a teammate he would not name and “someone got physical with the teammate … so Jahlil did what he felt he needed to do to protect himself and his friend.”

Also according to TMZ the site was able to obtain the following information about the scuffle…”We’re told everyone got up and fled the scene and no arrests were made.  We’re told the altercation began because one of the men in the other group yelled at Jahlil, “The 76ers suck.” We spoke with a rep for Jahlil who tells us … Okafor says he was being heckled from the moment he left the club and felt threatened because people swarmed him on the street.

It appears that Jah and the pother individual trade verbal jabs for a minute and if you listen to the video closely, you can hear Okafor yell, “We got money you broke ass n****” .  Quickly after that, Jah charges the man, clocks him in the head and knocks him to the ground.

In an email to Philadelphia The Inquirer, a Sixers spokesman said: “We are aware of the report, and we are currently working to gather additional information. Until that time, we will have no further comment.”

If you want to read anti-“trust the process” take of Jah’s street fight read this doozy by Michael Lee at Yahoo Sports in which he blames tanking for Jah’s actions and states, “Having seasoned players around won’t prevent kids from making mistakes altogether, but the TMZ video should serve as a reminder that the long-term development of the 76ers might be enhanced if a chaperone or two were around to help the youngsters deal with getting their heads beat in.”

C’mon…there’s nothing a Jason Richardson-type could have said or done to prevent the incident as that older veteran likely would have been back at the hotel sleeping in his bed.

I’m not one to condone violence or street fighting, especially when one individual is the 6-11 and 250 pound starting big man for my NBA team, but I have to say that a little slice of me is proud of Okafor and the way he defended the 76ers.  I only wish the Eagles had shown the same moxy on Thanksgiving Day against the Lions.