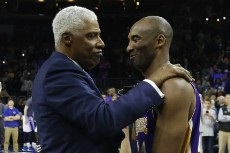 There were some boos, more cheers, and even more emotion.

Draft implications aside, Kobe Bryant’s last professional game in Philadelphia went about as well as it could have for a Sixers supporter also appreciative of Kobe’s career.

There were vintage Kobe moments – like his three three pointers in the game’s first two minutes*. The game also had its share of modern day Kobe gaffes – he was 7-for-26 from the field – which served to remind the packed Wells Fargo Center, and the player himself, why he is walking away from the game after two dominant decades with the Lakers.

There was pageantry- like the pregame tribute to Bryant featuring his Lower Merion high school coach Gregg Downer and Sixers legend Julius Erving, and the banner that scrolled across the jumbo-tron thanking Bryant for the memories – but it wasn’t excessive.

The consistent cheers and “MVP” chants that rained down on Bryant throughout the evening didn’t feel forced- even as he sludged his way through another poor performance from the field and his team served as the first win for the league’s only remaining winless team – but rather appreciative of the moment. Bryant’s career accomplishments are impressive, especially when contrasted against the young and inexperienced current Sixers squad, hoping to one day achieve similar success.

Bryant has long said that he didn’t want a drawn-out farewell tour, but he seems reserved to allow himself to enjoy the moments of recognition as they inevitably come. As long as that enjoyment isn’t outcome-derived, he should be fine.

There is a certain type of irony in the fact that the guy responsible** for costing the Sixers their Iverson-era championship couldn’t lift the Lakers over a Sixers team that started Isaiah Canaan and Jakaar Sampson on Tuesday. But, the young Sixers were hungry, and the aged Bryant was tired.

“I just can’t sustain that energy like I used to,” he joked after the game. Gone is the kid who saw no chinks in his own armor. Bryant now speaks like a veteran painfully aware of his own mortality.

Bryant’s on-court struggles are evident to all, but his past accomplishments far outweigh his current shortcomings in the collective mind of basketball fans, and those in Philadelphia were eager to show their appreciation.

“They got me. I wasn’t expecting that kind of reaction,” Bryant said of the crowd’s boisterous support throughout the evening. Although such support is probably something he should get accustomed to for the remainder of the season.

There was just something fitting about the first away game of Bryant’s unofficial farewell tour taking place in Philadelphia. Bryant acknowledged as much.

“Couldn’t have scripted it better.”

*With 10:32 remaining in the first quarter, everyone watching the game was was excitedly wondering if we were in store for a throwback Bryant performance.

**Along with Shaq; no one forgot about him.