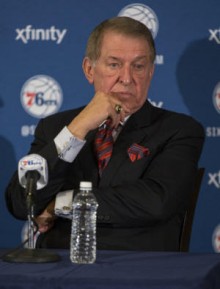 Even for those of us who completely “trust the process”, there is no denying that the 76ers last 2+ seasons have been painful to live through (Last night’s 51-point loss to the Spurs was possibly the most painful moment.). Every individual no matter how mentally and physically tough, has a specific threshold for tolerating pain and once that point is exceeded, you will plead for mercy. Well, apparently a 1-20 record, a host of off-the-court issues from prized rookie Jahlil Okafor and allegedly a push from NBA commissioner Adam Silver have forced the 76ers’ ownership group to finally cry “mercy”.

Thus, on Monday, the Sixers announced that Jerry Colangelo — a Hall of Famer and the man responsible for resurrecting USA Basketball — will join the franchise as a special advisor and chairman of basketball operations.

After the jump, are three different takes I have assembled from my NBA contacts on the most recent move by Josh Harris & Company in “the process” .

Take #1: A Major Detour in the Process — The 76ers brass expected better results this season than a 1-20 start.  The are totally embarrassed and are fed up with the losing.  Their disappointment along with a strong nudge from the Commish’s office in New York City led to the hiring of Colangelo to speed up the “process”.  Sam Hinkie and Josh Harris can spin this hiring anyway they want, but Colangelo is here to right the ship and do it rather fast.  Colangleo will likely have final say on all moves during arguably the most important Draft / off-season (tons of cap space) in this rebuild.  Hinkie did a great job of tanking, but recently there are significant questions about whether or not he can actually build this team up.  Jerry’s hiring is intended to solve that issue.

Quote from anonymous NBA Contact: “Jerry doesn’t take a backseat to anyone. He’s in Philly to build a winning team faster. He will hire his son (Jerry) eventually. They had become the laughing stock of the League. His resume and USA Basketball credentials give the franchise immediate credibility and may help them attract free agents this summer”.

Take #2: A New Face for this Franchise —  Josh Harris has no personality and looks uncomfortable in front of the cameras / talking to the media.  Sam Hinkie refuses to work with the media in any capacity.  Scott O’Neil is a media favorite, but is prohibited from discussing basketball operations topics.  Lastly, Brett Brown is worn out from coaching a historically bad team as well as handling all the media responsibilities for the franchise.  When you combine these elements with how badly the Sixers butchered the Okafor off-the-court drama, it became apparent that the 76ers needed a respected basketball person to be the media / public face of this franchise. Colangelo certainly has the resume (Suns; Diamondbacks and USA Basketball) to garner respect and he is a media darling.  Already today he appeared on Breakfast on Broad, gave interviews on both of the major sports radio stations in town as well as SiriusXM NBA Radio.  Colangelo will have some input on basketball operations decisions, but his main role will be to repair the image of this franchise in NBA circles, with the media and Philadunkia nation.

Quote from anonymous NBA Contact: “Jerry’s just okay on the basketball front and possibly help with free agents. Team is poorly owned and poorly run at that level.  Their image is a disaster. Group is not respected around the league. Those areas are where he can help the most. “

Take #3: A Co-Pilot for Hinkie — Again, Hinkie did a great job of tearing the 76ers  down to the ground and gathering numerous 1st and 2nd round Draft picks along the way.  These “assets” will serve as the key elements to his rebuilding ” process”.  Now it’s time to start the actual building of a contending team and the ownership group along with Adam Silver felt Hinkie needed a seasoned NBA front office type to support him with that end of “the process”.  In addition to serving as a sounding board for Hinkie on Draft matters, Colangelo can advise Hinkie on navigating the NBA trade / free agent waters.  After all, Hinkie has suspect credibility in NBA circles and absolutely zero credibility with player agents around the League.  Colangelo’s hiring supports Hinkie in both of those areas which in theory will help the Sixers reach the goal of “the process” — building a contender — faster.

Quote from anonymous NBA Contact:“None of this matters (“the process”) unless they build this team up in the right manner. This summer presents a tremendous op for that team and they have to get it right.  Colangleo will be an excellent resource for Hinkie to lean on as he builds through this Draft and free agency — where he is hated by (player) agents.”

RT @PompeyOnSixers: #TellingStatFlow: The #Sixers are 9-4. They’re 7-0 when all five of their starters play. They’re 2-4 when at least one…
h J R
Follow philadunkia