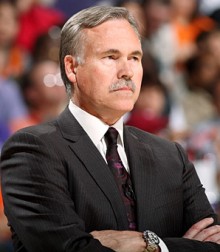 The 76ers record stands at 1-24.  They have dropped 7 straight games.  The last four loses have been by an average of 23 points.  Brett Brown’s roster does not boast  an NBA starting caliber point guard or shooting guard and features two dynamic bigs that may not be able to play together. They lead the NBA in turnovers (17.4 per game). Lastly, the Sixers have been awful on defense, ranking at the bottom of the League in points allowed (102.8 ppg.– 23rd).  In short, the 76ers are an absolute mess on the court.

Still, despite all the losing, makeshift lineups and embarrassing statistics, I have been impressed that this roster and coaching staff have stuck together in the locker room and that even during the lowest point of “the process” there appears to be no internal drama on this team.  Which is why this past weekend’s rumors regarding former Lakers/Knicks/Suns head coach Mike D’Antoni possibly joining the 76ers staff are raising significant issues in my basketball mind.

I want to establish a few things before we dive into the reason behind why I think adding D’Antoni to the 76ers’ coaching staff is bad decision.  First, I spoke with several of my NBA contact regarding these rumors and the consensus on the situation is that the 76ers, through the recently added Jerry Colangelo, have “talked” with the D’Antoni about joining the Sixers staff.  However, talking is all they have done and this potential hire is far from a done deal.  The other consensus among my NBA contacts is that D’Antoni (64 years old) desires to be a head coach again some day.  Obviously that is more likely to happen if D’Antoni is “back in the game” and a member of a current coaching staff.

(FYI…If you have lost track of D’Antoni’s whereabouts since he was not retained by the Lakers following the 2013-14, you’re not alone.  One of my NBA contacts who has been in the League for 15+ years couldn’t recall where D’Antoni was living these days.  By the way, it’s West Virginia.).

The second item I want to establish is that I see real value in adding a veteran coach (D’Antoni has 11 years of head coaching experience and was the 2004-05 NBA COY.) to the 76ers’ bench.  I’d prefer if it was a veteran coach with a defensive pedigree, but I can’t argue against the idea that this staff could use a more seasoned member.  D’Antoni would be an especially interesting addition given that his Phoenix teams pioneered the small-ball, 3-point-centric, style of play that is popular in today’s NBA. I’d be slightly interested to see how D’Antoni could assist Brown and the 76ers with their “pace and space” system that has struggled to reach its full potential.

With those items established, I want to go on the record as stating that I believe selecting D’Antoni as the veteran coach to add to the Sixers bench is a mistake, a BIG mistake.  Here’s why….

DRAMA:  Sports journalists love it.  Head coaches hate it.  The D’Antoni rumors come a mere a week after the 76ers were “persuaded” by Adam Silver and apparently a host of other NBA owners to hire Jerry Colangelo as a “special advisor”  and “chairman of basketball operations”.  Colangelo’s hiring immediately sparked a debate as to what his presence meant for Sam Hinkie and “the process” as well as who is now the ultimate decision maker on basketball matters in the Sixers’ front office.  Those debates are not going to end anytime soon.

Given Colangelo’s close ties to D’Antoni (Colangleo was D’Antoni’s boss with the Suns and at USA Basketball) his addition to the Sixers coaching staff would be a clear indicator that Colangelo has more power with the 76ers than Hinkie and Josh Harris let on at the “this is great thing” press conference they held last week.  Adding D’Antoni to the staff would basically be a declaration of war by Colangelo on Hinkie and “the process”.   I’d like to avoid that kind of atmosphere for a front office that has arguably the biggest off-season in franchise history on the horizon.

In addition to front office drama, adding D’Antoni could create drama in the locker room.  Colangelo has already stated that he still plans to live in Arizona while helping Hinkie rebuild the 76ers.  Even with modern technology — NBA TV/League pass; digital game film; smartphones; tablets; etc. — it would be very difficult for Jerry C to have a good feel for the daily workings of the 76ers from 2,000 miles away.  Enter D’Antoni.  As an assistant coach added to the staff nearly 30 games into the season, D’Antoni’s role could be misinterpreted (or accurately interpreted) as nothing more than an informant for his long time colleague.  Imagine you are Brown and his staff and you have to go to work every day knowing there is a “mole” / “rat” in your locker room calling Colangelo is sunny Arizona with his critique of your every move.  That would be a less than an ideal work situation for Brown, especially given the continued tanking this season and one can see where the addition of D’Antoni could stir up drama for Brown in the locker room.

Look, D’Antoni has been out of a job for some time now and if Hinkie and Brown felt he could bring added value to this franchise they would have hired him prior to Colangelo’s arrival.  There is very little good that can come from Colangelo forcing D’Antoni on to Brown’s staff and I for one hope this “hiring” does NOT happen.