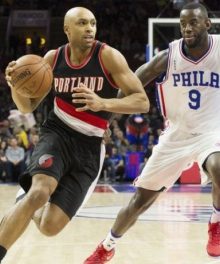 Overshadowed in the pandemonium Dario Saric caused by coming to America to sign with the 76ers as well as Simmons-palooza out in the Las Vegas, was the two-year $18million deal Philly native Gerald Henderson inked with the franchise.  The 7-year NBA veteran (28-years old) who attended Episcopal Academy (back when the Main Line prep school was located on City Ave.), spent last season with the Portland Trail Blazers where he averaged 8.7 ppg. while shooting 44% from the field and 35% from deep.

The exciting news on Saric and Simmons’ eye-popping play out in the desert are certainly causes for celebration, but for me the addition of Henderson was a fantastic move that did not receive the attention it deserves.  I believe Henderson will have an immediate positive impact on this team and thus help the franchise take a step forward in 2016-17.  After the jump we present an analysis of Henderson’s game that includes insights from Portland Trail Blazers assistant coach David Vanterpool.

Philadunkia:  At the start of last season in Portland Henderson was coming off a significant injury.  Can you give us some insight as to how that injury impacted his play over the first several weeks?

Vanterpool:  Early in the season it was tough because he was coming off hip surgery and rehab and going through the process of getting himself completely ready to play and contribute. So early in the season it was very tough because he was out a lot of the time.  But what he gave us during that time was a lot of knowledge from a veteran standpoint. Just communicating with guys; telling guys what he saw and passing on his knowledge of the game. He also was a great example for others just seeing him fight through rehab. They saw the entire process so he was a great influence for our team early on.

Philadunkia: Once healthy, what did Henderson provide on-the-court for the Blazers last year?

Vanterpool:  As the season progressed his role changed; his minutes increased and he became a major contributor for us on the court. He brought a lot of toughness that we really, really needed for our team.  He gave us another scorer as well as all the other tangible things you see on the stat sheet.  But his toughness is something we needed badly and he provided that.  It gave a lot of the younger guys confidence.  I know Mo Harkless gained confidence that Gerald had his back. Alan Crabbe, Damian (Lillard) they gained confidence that they had another guy to go to war with each night.

Defensively his understanding of the game, his athleticism  and ability to protect the rim he was great for us on that end.

Philadunkia: What area of his game improved the most during his brief time in Portland?

Vanterpool:  His 3-point shooting was the area where he improved the most last season.  He became a very consistent shooter especially from the corner.  I think he got up to the high 30% range (on 3PM) which would be the highest of his career.  He really took to the style of play that we like to run.

On other part of his game that really evolved over a period of time last season was his ability to adapt.  Gerald is use to being a 4.  So he would get the ball and post up; make his move and pulls up over the top of a defender, so on and so forth.  That was the crux of his game coming here.  He really adjusted to our style of play and came off flares and was diving to the basket. He really got to the point where he wasn’t posting  up as much as we would have liked him to there for a stretch.  So I had to tell him not to forget about what he does best, ‘Go pistol; set a screen; and we’ll get you the ball on the blocks.  Then do what you do best’.  It was interesting to see how he was able to adjust and be effective for us in different ways.

Philadunkia:  The 76ers young roster is in desperate need of veteran leadership.  Is that something Henderson can provide for this franchise?

Vanterpool:  Absolutely.  Gerald definitely has high level leadership qualities.  As far as his professionalism, his attitude, his character and the way that he cares about his teammates I think he could provide tremendous veteran leadership on any team. Gerald will be great for that young squad.  Guys are quicker to follow a veteran player who can contribute on the court during games and not just in the locker room or at practice.  That’s an advantage “G” has right now that will help him lead that team…We’re going to miss Gerald.  I miss “G” already and congratulate him on signing with Philly.  I know that playing for the Sixers was a dream of his and I am really happy for him.

Below is Q&A on Henderson I conducted via email with Dave Deckard, Managing Editor of blazersedge.com:

Philadunkia:  Henderson’s basic vitals (mins/pts/rebs) were down last year, but the NBA scouts/contacts I speak with about Henderson say he actually had a great 2015-16 in Portland. Give us your thoughts on the drop in his base stats vs. what your eye test saw on the court.

Dave Deckard of blazersedge.com: He had surgery in the off-season, which slowed his transition into 2015-16. After he recovered physically, his game looked as good as ever. His aggregate numbers went down because of the way he was used: platooning with Allen Crabbe in rotation behind CJ McCollum. His per-minute numbers actually went up last season with the Blazers. He looked free and mobile, his three-point shooting reached a career high, and his mid-range scoring filled a hole for the team. I’d have no concerns about Henderson’s future based on what I saw in ’15-’16.

Philadunkia: 2015-16 was the third straight year that Henderson established new career highs in 3PA and 3PM. Is Henderson’s growth in this area simply the product of being a wing player in today’s 3-point loving NBA game or do you think Henderson has established himself as a legit 3-point threat?

Dave Deckard of blazersedge.com: Some of both. It’s hard to justify filling a wing position without long-range shooting in your portfolio nowadays. Henderson’s game has drifted towards the perimeter over the years and did so even more in three-point-happy Portland. I’d say it’s something Henderson can do adequately but not necessarily something he’s natural at. Driving and pulling up for the mid-range jumper (or the occasional raucous dunk) is more in his wheelhouse still.

Philadunkia:  Henderson needs to be a leader in the locker room and the court for this youthful 76ers team. Did you see anything from Henderson during his time in Portland that tells you his can handle a leadership role here in Philly?

Dave Deckard of blazersedge.com:  He accepted a reduced position with grace and gave full effort on the court. We never heard anything about him that wasn’t positive. On the floor and in the locker room, he was a pro. I don’t know if he’ll be the type to marshal the troops but he’ll be a positive example…a real pro.

ESPN Insider Kevin Pelton had the following to say on the Henderson signing: “Along the lines of Philadelphia’s previous reported signings of guards Jerryd Bayless and Sergio Rodriguez, Henderson is another veteran role player who brings experience and professionalism to the young 76ers. In his case, I’m more surprised no other team was willing to step in with a similar offer that gave Henderson the chance to play for a winning team.

After playing his entire career in Charlotte, Henderson showed better shot selection last season with the Portland Trail Blazers. His ratio of long 2-point jumpers to 3-point attempts was close to a more desirable 1:1 last season after it was about 2:1 in previous years.

Henderson also shot a career-high 35.3 percent from 3-point range, allowing him to post the second-best true shooting percentage of his career (.526).  Still, Henderson scored with below-average efficiency, and I think Philadelphia might be disappointed by how small an upgrade he provides over incumbent wing Hollis Thompson, who doesn’t create his own shot as well but is as good or better in terms of efficiency.

Perhaps the best hope for the Sixers is that Henderson plays well enough to interest a contender in giving up something of value for him at the trade deadline one of the next two seasons.
After adding to its backcourt, Philadelphia still has nearly $30 million in cap space remaining and about $20 million to reach the salary floor. The scarce resource for the 76ers is roster spots. Henderson gives them 12 players with guaranteed contracts, along with another three (Thompson, Robert Covington and T.J. McConnell) who have non-guaranteed deals and are worth keeping.  Philadelphia may end up dealing one of those cheaper players to make room to continue adding.”

RT @PompeyOnSixers: #Sixers PF Tobias will have test on his knee tomorrow morning to make sure it is structurally fine.
h J R
philadunkia

RT @therealmikekb: "There's so many things that we still need to improve on. We have a long way to go." - Doc Rivers on the #Sixers.
h J R
philadunkia