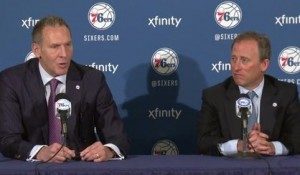 Yesterday — four days after Sam Hinkie shockingly resigned — Josh Harris and Bryan Colangelo held a press conference that was scripted like a Presidential address. They hit on the key points — Hinkie is obviously out; Jerry Colangelo will have a lesser role; and to no one’s surprise, announced Bryan as the new General Manager of the Sixers. Then they played defense against an unending wave of questions.

In the end, we got no real answers.  As I sat and watched Harris awkwardly squirm through another major press conference, I thought to myself, ‘this is third time I have listened to Josh Harris announce a change in the course of this franchise.  Why I am to believe that this ownership group has finally gotten it right this time?’

After the jump, a look at the three course changes Harris and Co. have executed in four short years.

Course #1:  In year one of their ownership, Josh Harris and Co. gave full control of basketball operations power Doug Collins the nearly burnt out and clearly old school head coach of the 76ers who had zero front office experience on his long NBA resume.  If you recall, that decision was an absolute disaster for the 76ers franchise.

Collins decided to “swing for the fences” and traded Nik Vucevic, Mo Harkless, a future 1st round pick and Andre Iguodala (to Denver) in exchange for former all-star, now broken down center Andrew Bynum and ancient swingman Jason Richardson. Collins was going to use Bynum as the center-piece of his inside-out offense, a relic of a system in the three-ball crazy world we all lived in then and now.  Of course Bynum never played a single minute for the 76ers during the 2012-13 season.  DC’s conservative “avoid-the-live-ball-turnover at all costs” offense flamed out (3oth in PPG that season).  The Sixers finished with a 34-48 record.  Collins had a personal melt down late in that year and quit on his team at Christmas time.  Then he quit for real at the end of the season telling 76er ownership, “I know you’re going to be hiring a new GM — that would have been my fourth GM in four years — so I just feel like at this point in time there would be a better coach for you than me.”  His departure was a blessing for the 76ers and the fans.

Course #2:  After the Doug Collins led Andrew Bynum debacle, Harris & Co. brought in analytics wonder boy Sam Hinkie who pushed the tank button and of course initiated what we all lovingly refer to as “The Process”.  Basically, “The Process” involved trading away decent/solid NBA players for future assets/picks and cap space as well as losing nearly every game in an effort to grab the pole position in the NBA Draft Lottery.  “The Process” went on for three seasons and although it was not perfect (on and off the court), in general, it worked.  Because of Hinkie the 76ers have a much better long term out look (great deal of cap space and a slew of draft picks) than they did after the 2012-13 season.

As we all know, Hinkie no longer manages “The Process”.  Hinkie resigned last week via a 13-page manifesto thanks to an ownership group here in Philly that has no backbone; the meddlesome ways of Adam Silver and other owners in the Association; bitter NBA super agents and of course Jerry Colangelo.  Josh and Jerry will deny it, but the elder Colangelo’s finger prints are all over Hinkie’s diminished power and eventual departure.  Honestly, successful coups in third world Carribean island nations don’t happen this fast.

Course #3:  Hinkie is out and the Colangelo regime is now in full effect.  Despite statements by Harris yesterday to the contrary (“I understand the optics of it, but the reality is Bryan was head and shoulders above every other candidate,” Harris said. “But the reality is, I went with Bryan because he was the best guy for the job.”), it’s obvious that Jerry’s (father) presence in the Sixer organization had a direct correlation to Bryan (son) being hired as the new GM of the Philadunkia’s home team.  The only thing more shocking than Josh’s ridiculous statements to the contrary yesterday is that one of my most trusted NBA contacts predicted this scenario back in December.

“This may be one of the best jobs in basketball right now,” Bryan said yesterday with a sly grin on his face.  No sh**, Captain Obvious.  Guess what?  The attractiveness of the 76ers job is because of Hinkie’s “process”.

After the Hinkie resigning an NBA front office contact told me the following about the 76ers ownership, “They (76ers ownership group) are bad.  Josh Harris knows nothing about sports and even less about basketball.  For him this is a business deal with a fantasy sports angle.”

Harris said yesterday that he “didn’t lose faith” in Hinkie and expressed disappointment in his departure.  Well Josh after a third regime/direction change in four years, I have lost faith in this ownership group and I will not be disappointed when you and your billionaire friends eventually sell my team.