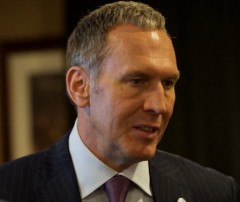 After a highly successful but controversial coup by his father Jerry, newly installed General Manager Bryan Colangelo hit the local airwaves on Monday and Tuesday to deliver his message to Philadunkia nation.  In his orchestrated media blitz, Colangelo basically continued his my regime is “not about a departure from a strategy” mantra and added that the next phase of the Sixers rebuild will be focused on “sustainable winning”.  Tuesday morning on SiriusXMNBA Colangelo continued his media marathon and threw out this zinger, “The time has come to accelerate the process”.

Over the last two days, Colangelo, in general has said all the right things during his numerous appearance on the sports airwaves.  A little part of me was actually impressed with his words.  However, I still don’t believe he is the right man for finishing “The Process” and leading this franchise back to relevancy.  So today in an effort to get a less biased opinion of Colangelo, we turn to our colleague Sam Holako of raptorsrepublic.com to help us examine Colangelo’s time in Toronto.

Philadunkia:  Colangelo appears to have experienced a roller coaster ride in Toronto. What is your overall assessment of his tenure?

Sam Holako of raptorsrepublic.com:  I think of the word “if” a lot; if he didn’t swing for the fences so much, his tenure would have been much more successful, but overall, I’d give him a strong B-. In his first year, he made some great veteran signings (Anthony Parker and Jorge Garbajosa) that translated into a 20-win swing and a playoff appearance in that same year. He drafted very well; was great at identifying underrated talent on great deals (the Kyle Lowry trade for one, but signing Amir Johnson to a 5yr/$34mil deal was incredibly astute), but really struggled at managing chemistry (Jermaine O’Neal, Rudy Gay) and the Cap (Hedo Turkoglu, Jason Kapono, Landry Fields).

Philadunkia: What do you view as Colangelo’s best move?

Sam Holako of raptorsrepublic.com:  He traded Gary Forbes (who?) and a protected 1st rounder (that ended up going to OKC in the Harden trade I believe) for Kyle Lowry. That trade was lauded then, and looks absolutely criminal now.

Philadunkia: What do you view as his biggest mistake?

Sam Holako of raptorsrepublic.com:  There are so many painful ones; a few highlights: he double downed on Andrea Bargnani to the tune of 5 years and $50 million; no need to go into this one… He traded Shawn Marion’s expiring contract to Miami in a complicated deal that netted us Hedo Turkoglu (4yr/$44mil I believe is what he paid the “prized” free agent of the year); if this deal didn’t happen, Miami wouldn’t have been able to get both Bosh and LeBron, and the decision would never have happened…we can only dream. He offered Landry Fields a 3yr/$21mil offer that the Knicks gladly didn’t match in an attempt to hamstring them into not being able to grab Steve Nash from under his clutches; avoiding an aging/crippled Steve Nash turned out to be a good thing, but we had to endure three expensive seasons of Landry Field’s instead…sorry, I have to stop, my anxiety is raging.

Philadunkia: What ultimately led to Colangelo’s downfall in Toronto?

Sam Holako of raptorsrepublic.com:  He swung for the fences every chance he got in addressing gaps in the Raptors lineups that at best looked suspect at the time (Jermaine O’Neal), and horrible in retrospect (Hedo Turkoglu), but his inability to manage money and including first round picks in trades like they would rot if he didn’t impacted his ability to manage the cap and led to fielding a team that didn’t have the chemistry to win in the short and long terms.

Philadunkia: There appear to be differing opinions on how much credit does Colangelo deserves for the current success of the Raptors. What are your thoughts on this debate?

Sam Holako of raptorsrepublic.com:  Picking up to what led to his downfall from above, Ujiri traded both Bargnani and Gay for players and picks that currently have this team humming along nicely heading into the playoffs. Yes, BC drafted/acquired much of the current core (DeRozan, Valanciunas, TRoss, Lowry) that has the Raptors on the heels of the Cavs in the East, but had he been here, neither of those deal get made, and this team looks a great deal different than the one on pace for 56 wins (and hopefully a deep run in the Eastern Conf.). He absolutely deserves some credit for assembling some of the core pieces of this current team, but the last mile tweaks Ujiri has made (Biz, Cojo, 2Pat, Powell, DeMarre Carroll) have addressed all the cap/chemistry issues that plagued the team under Colangelo’s watch.

Obviously “The Process” is/was not about swinging for the fences and quick fixes. Hinkie’s plan was about the long term view and building a title contender, not just a playoff team.  Thus I will be very interested to see if Colangelo in an effort to achieve“sustainable winning” quickly returns to his Toronto ways.  Or has Bryan learned from his mistakes north of the border and has a plan for the Sixers that remains close to the basic theories of “The Process”. For the sake of this franchise I pray it’s the second option.

Thanks to Sam for his time and his answers.  Give him a follow via @rapsfan.