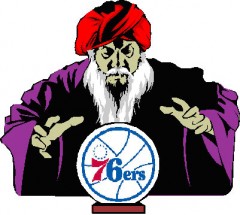 As a reminder, this Philadunkia question and answer series is “loosely based” on ESPN.com’s highly successful, NBA related series of posts titled “5on5″.  Our version of this genre of posts will ask 4 Philadunkia scribes to answer 4 topical, hot button questions about our Philadelphia 76ers.

Well as any great hoops coach will tell you — playing 4on4 is the best way to truly learn the game of basketball.

C. Smith:  “Cov’s” poor shooting has been shocking, but the Colangelo hiring takes the cake here.  It was obvious to me that this was the final year of Hinkie’s “process” and I was fine with how 2015-16 was progressing.  With Embiid on the mend, the No. 1 pick in Draft16 likely belonging to the Sixers, Saric coming over from Turkey and a host of other assets, Hinkie’s 76ers will be significantly improved next season.  So I liked the course Hinkie had this franchise on and was shocked that Josh Harris would make/allow this hiring.  Then you learn that Adam Silver and the other NBA owners had different thoughts on “the process”; twisted Josh’s arm; and the Colangelo hiring remains an epic surprise, but at least it makes some sense.

Kaskey-Blomain:  It has to be the hiring of Colangelo, as that came out of what seemed like nowhere. Covington’s slump is more disappointing than surprising, as I really expected him to thrive in his second season with the Sixers. Shooters hit slumps sometimes, you just hope he can push out of it and get back on track.

McMenamin:  Jerry Colangelo’s hiring, which really came out of left field.  While Robert Covington’s shooting slump is surprising, I don’t think anyone was prepared for the Colangelo news.  Sam Hinkie always seemed like an untouchable man who would have free reign of the team’s roster decisions until “The Process” turned into a disaster. To bring in Colangelo (and Mike D’Antoni I might add) halfway through Hinkie’s rebuild was not something I expected to happen.  The additions of Ish Smith and Elton Brand in recent weeks, while jettisoning second round picks and young talent, show a turning of Hinkie’s thought process that he’s followed so closely over the past three years.  It’s hard to make of what will eventually happen to Hinkie or if Hinkie will get credit for the rebuild.  In my opinion, he absolutely should. But will he in the public eye? I’m not so sure.

Cook: The only thing more shocking that could have been more shocking than the Colangelo hiring was me winning Powerball last night.  It’s not just Colangelo’s hiring that is so shocking either.  The manner in which Silver and the other NBA owners apparently forced this hiring on Josh Harris is simply stunning to me.  Silver and others around the League are angry at Hinkie for exploiting the loopholes in the NBA rules and forcing and old guard like Colangelo on the 76ers was the only way they could put a stop to Hinkie’s evil genius ways.

C. Smith:  My knee jerk reaction is to say the play of Nik Stauskas, but I am not going to stop with just him.  For me the most disappointing development has been the perimeter play by the 76ers during the first half of this season. Stauskas, Covington, Canaan, Wroten (now gone), McConnell, Marshall and Thompson –not one of them has played well consistently.  I question if some of them even belong in the League.  None of these “assets” can hit a deep shot with regularity and only Covington has a clue on the defensive end.  Outside of Ish Smith, Hinkie will need a complete reboot of his perimeter personnel this summer.

Kaskey-Blomain:  The play of individual players like Covington; Stauskas, and Kendall Marshall has been disappointing, but those are relatively small-scale disappointments.  To me the most disappoint development is the inability of Noel and Okafor to play cohesively together.  Ideally, they would have meshed and formed a dynamic duo that Embiid could eventually join in on, but the Sixers are based in reality, not ideology.  They’re both incredibly talented individually, but their apparent inability to coexist leads to questions about long-term franchise fit for both guys.

McMenamin:  The most disappointing development over the first 41 games has easily been the play of Nik Stauskas. I’m not going to say that he can’t turn things around at this point in his career, but things aren’t looking good. I was thrilled when the Sixers first traded for him in July, basically fleecing the Kings’ front office in the process. Now? I’d rather see Hollis Thompson or JaKarr Sampson getting minutes over him at the two spot. His three-point shooting percentage is down from an already putrid 32.2 percent his rookie year to just 31.3 percent this season. He still can’t play defense and he definitely should not be playing his season average of 23.2 minutes per game the rest of the season. The bust label is becoming stronger with each passing game.

Cook:  I’m going to assume that the play of Nik Stauskas was a popular answer to this one, so I’ll go in a different direction and say it’s the fact that Noel and Okafor cannot be on the floor together for extended minutes.  I knew that it might be difficult for these two bigs to work together and find a groove, but I believed that Brown could help them figure things out.  There’s no shot of that happening and it’s nobody’s fault, it’s just the facts.  Noel and Okafor simply cannot co-exist on the court and one of them will likely need to be traded.

3) What was your win total prediction prior to the start of this season? What is it now and give a reason or two for the adjustment?

C. Smith:  I predicted that this team would get off to a slow start in the first month and a half of the season but rally to collect 22 wins.  Obviously that is not happening, so now I think we are looking at 14 wins for the 2015-16 season. After a brutal slate through the first 30 games, the Sixers schedule get significantly easier in late January and then into February.  Factor in the addition of Ish Smith and the theory that a number of losing teams with veteran rosters will soon be mailing it in and you have a recipe for the Sixers to pick up 10 wins over the last 41 games of the season.

Kaskey-Blomain:  I had the team pinned around 20 wins. I don’t think they’ll get there now for a myriad of reasons, namely their slow start to the season.  If they had Ish Smith since the beginning of the season, it would be a different story.  But they didn’t, and now 13 wins seems like a more reasonable prediction for the season.

McMenamin:  I believe I pegged them to get to 20 wins at the start of the season, but I don’t see them getting more than 15 now. I never imagined that in the third year of Sam Hinkie’s rebuild that he could end up with the worst record of his tenure. I think my adjusted win total for the team would be 14 wins. Yes, the team has won three of their last nine games, but they’re still an inferior opponent to nearly every team in the League (sans the Nets and Lakers) every time they step on the court.

Cook: I believe I predicted 19 wins for the 2015-16 season and there’s no doubt that the Sixers will come up short of that mark.  Still I think they will stage a rally (of sorts) here in the second half of the season, win 10 games, and finish with 14 victories on the season.  There’s simply too much positive energy coming out of PCOM right now for this squad to only win another 4 games over the last 41 contests.  If they had Ish Smith on the roster from the start, they probably win 20+ games this season, which tells you why Hinkie made no attempt to resign Smith.

C. Smith:  Joel Embiid will be cleared for full participation at practice.  You asked for bold and that’s what I gave you.  In the last 10 days we have seen more of Embiid and heard more from Brown about his healing progress then we have over the first 3 months of this season.  Additionally Colangelo, Hinkie and Brown suddenly have all been telling the local media how “special” of a player Embiid is going to be when he finally gets on the floor.  There’s just a great deal of Embiid momentum recently and I cannot figure out why it would be surfacing now unless a return to action (at some noteworthy level) was imminent this season.

Kaskey-Blomain:  They’ll win more games than they won over the first half of the season. Ok, that’s not a bold prediction, but it’s a prediction nonetheless.  I think the team will continue to play better basketball with Smith at the helm, which should make the second half of the season at least slightly more enjoyable for fans.  As long as they don’t win too much as to jeopardize their lottery odds, it’s all good.

McMenamin: Robert Covington will be moved at the trade deadline. With Dario Saric coming over in the offseason and the Sixers likely taking forwards Ben Simmons or Brandon Ingram in the 2016 NBA draft, that leaves little minutes for Covington in the Sixers lineup. His career averages of 11.9 points and 4.5 rebounds while shooting 35.7 percent from the three-point line should draw interest from some teams around the league, and he’s on a very team-friendly deal.  He’d be the perfect addition for a playoff team in need of a reliable shooter.

Cook:  Colangelo pushes “the process” to the side and makes a move at the trade dead line that he will boast is great for the short term when in reality it does nothing to help the 76ers this season or in the long run.  Hinkie’s has no reaction / comments for the media to the move.  However the trade ignites a behind the scenes battle for power in the 76er front office.  Eventually Hinkie gets fed up and leaves the Sixers by the time we are all at the shore for Memorial Day weekend.