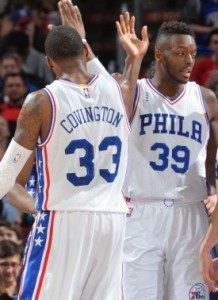 With the addition of Ish Smith (via trade for two 2nd round draft picks) and Elton Brand, it’s clear that Sam Hinkie’s “process” has been rudely interrupted by Adam Silver via Jerry Colangelo and Mike D’Antoni.  For a “process” faithful like myself Silver’s interference is an annoying development as one could argue that the 2015-16 season was Hinkie’s finest draft positioning work to date.  The 76ers had never been a safer bet to finally secure the No. 1 overall draft pick than they were pre-Silver/Colangelo.

Colangelo and of course Mike D’Antoni have screwed up “the process” by adding the solid point guard (Smith) and veteran leadership (Brand) that the 2015-16 roster has desperately needed. The result has been 3 wins in their last 9 games and a sense of hope (albeit false hope) for everyone involved with the franchise.  However, if Colangelo and D’Antoni are dead-set on continuing to make the mistake of improving the Sixers in short-term, then their next move should be to help Brett Brown fix one of the worst defenses in the Association.

That will be easier said than done.

When I watch the 76ers attempt to play defense, I find myself asking ‘Is it the scheme or the personnel that makes this such a poor defensive team?’  Unfortunately the answer appears to be…personnel.   So if Colangelo and D’Antoni are going to fix the Sixers at the defensive end of the court this year, they have a tremendous challenge in front of them.

SCHEME:  Brett Brown has changed his defensive game plan so many times this season I currently have a hard time determining what the basic principals for the Sixers are on defense.  Unfortunately the tweaks and adaptations the Head Coach has made to his defensive X&O’s this season have NOT produced better results.  The 76ers are ranked 25th in the League in points allowed (105 per game) and Opponent’s FG% (46.2%).  Opponents are also shooting 35% from deep (19th in the Association) and according to StatMuse boast a TS% of 52.7.  The Sixers’ Defensive Rating of 107.7 (24th in the NBA) is simply pathetic.

One NBA scout I texted with noted, “It’s hard to execute any defensive scheme when you can’t defend at the point of attack, have a number of poor perimeter defenders, and Okafor, who is a huge liability inside.”

OUCH.  So if scheme isn’t the main culprit, then let’s examine the personnel issues…

PERSONNEL:  If you have watched more then five 76er games this season, you know that this roster struggles badly on defense.  The defensive fundamentals among the majority of this group range from suspect to non-existent. Additionally, as a team they don’t exhibit that attitude/edge/swagger that is needed to be a good defensive unit. Along those lines, a Western Conference front office executive I spoke with commented, “This is a D-League roster playing D-League defense.  D’Antoni can’t solve that problem.”

Nerlens Noel:  Obviously #4 is a fantastic shot blocker one-on-one or as a help defender.  Additionally Brown has asked him to defend power forwards every night, a difficult task for any 7-footer and Noel has done a respectable job there.  Overall Noel is one of the better defensive players on the team.  However,  Noel still cannot defend the pick-n-roll, is frequently late on his weak-side rotations and has trouble guarding the ball.

Jahlil Okafor:  Okafor’s poor fundamentals, lack of quickness and at times lack of effort on the defensive end must have driven Coach K insane.  Even after one year at Duke, a program that prides itself on playing good defense, Okafor is still a tremendous liability.  Imagine what #8 was like coming out of high school.  GOOD LORD.

Nik Stauskas:  After watching Stauskas up close now for nearly 40 games, I have found that the former Michigan standout is significantly more athletic than I thought. While that athleticism has led to a number of vicious dunks from “Sauce Castillo” this season, it has not helped Stasukas stop opponents from blowing by him on a regular basis. His brand of Ole’ defense is something to witness.

Ish Smith:  Smith has been the catalyst for the Sixers resurgence on offense.  Now if he could just help this team out on defense some, he would be the perfect point man. For a super quick guard, his inability to stop penetration is bewildering to me.

Jerami Grant:  This year Grant has become a bona-fide shot blocking presence and arguably the Sixers best all-around defender.  He is prone to reaching in / fouling when guarding the ball, but that can be fixed.  It appears Grant has the physical tools (long & athletic; great quickness; good footwork), attitude and basketball IQ to eventually become an excellent perimeter defender.

Robert Covington:  The side-bar issue to Cov’s recent shooting slump is that his suddenly broken jump shot has forced the Sixers best perimeter defender to the bench.  Covington has always been a long and athletic player and those are two attributes that help tremendously on defense.  Still, it’s the work he put in during the off-season and his nightly dedication to that end of the court which has made Cov a very good defensive player this season (19th in the Association in steals).

TJ McConnell:  TJ had a reputation in college as a stellar defender and coming out of camp Brown commented that his defense was one of the main reasons TJ made this roster, but I got to tell you, I just don’t see it.  McConnell is what the CYO players I coach call a “Try-Hard” — meaning he works hard on defense, hustles and does all the right things, but still doesn’t get results.  Yes, he can knife through the passing lane for a steal, but he can’t defend the ball handler one-on-one; struggles with pick-n-roll defense; and can be posted up by the majority of the lead guards in the Association.

Hollis Thompson:  If you read this site in a regular basis, you know that I am not a fan of Thompson’s.  However I will be the first to admit that in 2015-16 the reserve wing player has improved at the defensive end.  Now that simply means he went from a suspect defender to an average defender, but I see you Hollis, I see you.

Isaiah Canaan:  Do we really even need to discuss this one?  Isaiah’s best defense is to splash home his ill-advised “Canaan-balls” so that the rest of the team has time to get back and figure out how to cover for him on defense.

The good news for those who believe in “the process” is that Colangelo and D’Antoni will NOT be able to unload all of these poor defensive players prior to the February 18th trade deadline.  So despite all of  Brown’s coaching and Colangelo / D’Antoni’s interference, I don’t expect this team to get better on the defensive end at any point in 2016.

Until there is drastic improvement in the personnel on this roster, the 76ers will continue to struggle on defense and thus continue to lose games at an alarming rate.  The “process” may have been briefly interrupted by Silver and Colangelo, but have no fear Philadunkia nation, Hinkie is a genius and thanks to horrific defense on the part of the 76er roster he assembled, the draft positioning should continue nicely for the rest of this season.