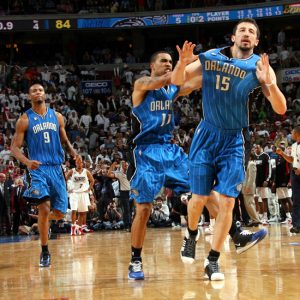 In order to write the recap of the Sixers game 4 match-up against the Magic, I had to take some time to regroup. After being up in the rafters of the Wachovia Center on Sunday night and hoping to take a 3-1 lead in the series, let’s just say I was emotionally drained as well as searching for answers by the time the game was over.

Instead of having a Monday afternoon post of the recap from game 4, I huddled by my TV and watched the replay of the heart wrenching game on Comcast SportsNet. When you watch a game you know you are going to lose, it is a lot easier to pick up on what went wrong. Seeing the game twice now, I realized that I have to tip my hat off to the Magic in game 4, because like the Sixers did in the first three games of the series the Magic went with a new strategy and stuck with it the entire game.

One part of the Magic’s new strategy was to not have their shooters (Turkoglu, Lewis, Lee, and Alston) depend so much on the three pointer, and to drive the ball to the rack. In the case of Hedo Turkoglu and Rashard Lewis this was really a main focus. For the first time in this series you saw both players aggressively take the ball to the hole. Both benefited as they each hit for 17. In a game where neither team broke the 90 point mark, hitting for 17 is a solid number. Lee and Alston each hit over 10 as well, and also stuck to the driving strategy. The strategy was streaky for the Magic, but if it starts becoming consistent then look out because then the Magic’s three point shooters will really come alive and the Sixers will be in big trouble. The drive and kick out strategy is one that the Sixers have been using against the Magic in the series and now it seems as if the Magic are giving us a little taste of our own medicine. The only problem is the Magic have great shooters, and we don’t.

Another thing I noticed about this game was that the Magic did everything they could to take Andre Iguodala out of the game, and Iguodala noticed it. The Magic would on countless plays take Dwight Howard out of the lane to guard Iguodala one on one, or send him to double Iguodala on a drive. For most of the game this strategy held up well and would force the Sixers other scorers to make plays. The other scorers, Andre Miller and Thaddeus Young, did not come through enough and only shot a combined 12-35. It wasn’t until after the Magic had gained their lead in the third quarter before Iguodala started noticing that underneath the basket was being left wide open. This is when you saw Iguodala playing the quarterback of the offense. The Sixers came roaring back at the end of the game, and Iguodala just kept feeding the ball inside whether it was Ratliff or Dalembert playing in the post. The run was capped off where with just 14 seconds left in the game, Iguodala flung a pass inside to an open Sammy D who slammed one home to tie the game at 81-81. Then the Magic outsmarted the Sixers.

Everybody in the Wachovia Center was on their feet and thinking overtime, and all the Sixers had to do was just make one more stop. The Magic’s most likely candidate in this situation is Hedo Turkoglu and the Sixers were trusting that Iguodala, who despite a poor defensive performance most of the night, could make the final stop for the Sixers to force OT. Instead the play went like this: inbound to Turkoglu, high screen and roll by Rashard Lewis (who looked like he executed a moving screen) which set up a one-on-one match up with Thaddeus Young, Young then backs off of Turkoglu thinking that he’ll drive to the rim and not wanting to give up that first step, but thenTurkoglu, who literally has two feet of space in front of him, rises up and nails the three and seals the game for the Magic.  It was a play that made you shake your head. In that situation you should be playing the tightest defense you possibly can and getting a teammate to help you defend if the player decides to drive toward the basket. Giving up two feet to an accurate shooter is a recipe for disaster.

Now that the Sixers have dealt with a couple different looks from the Magic in the playoffs, they should be able to hone in on what the Magic are throwing at them in Game 5 and attack its weakness. It is unlikely that the Magic will come up with a whole new strategy for Game 5, but rather a combination of the two that they have used against the Sixers already. The Sixers have already accepted the fact that Dwight Howard will get his numbers but they are not sold on the fact that Hedo Turkoglu will continue to play like he did in Game 4, or that Thaddeus Young and Andre Miller will shoot as bad as they did in Game 4. The Magic did play their best defense of the series last game, but the Sixers also did not find the answer to that defense until late in the game. I’m sure that in Game 5 you’ll see plenty more alley-oops and easy lay-ups from the Sixers if the Magic keep sending out Dwight Howard to guard Andre Iguodala.

Whatever defensive strategy the Magic roll out tonight, the Sixers must have the answers because if they want to keep their season alive, then winning Game 5 is a must. Speaking for everyone in Philadunkia nation, I pray that the Sixers win tonight and avoid a potential repeat of happened in 2008 during the first round against Detroit