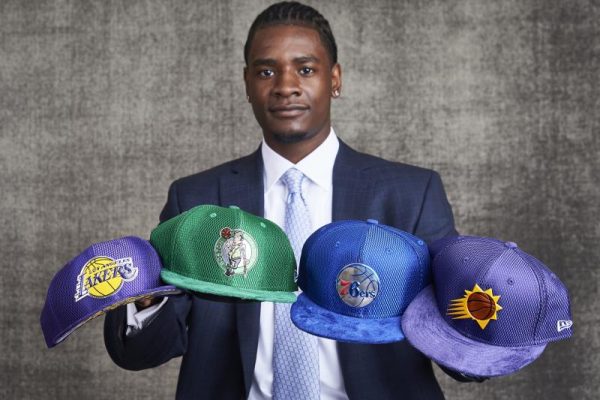 The topic of which top prospect (Jackson; Tatum; Ball; etc.) Bryan Colangelo will select at No. 3 will continue to dominate 76ers talk until Draft Night 2017 and we will discuss it a length on this site over the next week.  But today I want to take a few minutes to look back 20+ years in Sixers history to the spring of 1996.

If you recall, in 1996 Pat Croce was running the 76ers and Brad Greenberg was the franchise’s General Manager. The 76ers held the No.1 slot in the NBA Draft and the list of top college prospects in ’96 included the likes of Allen Iverson, Stephon Marbury, Marcus Camby, Ray Allen and a local high schooler named Kobe Bryant.  Much like Draft17, the 1996 Draft was a critical event for the future of the 76ers franchise.

I reached out to Brad Greenberg, who is currently coaching in Turkey, and via email he discussed with me some of the inner workings of the Sixers front office leading up to the highly critical 1996 NBA Draft.

Colangelo, Brett Brown and the rest of the 76ers front office have been hosting prospect wokrouts for weeks now in order to determine which prospect is the best fir for the franchise at No. 3.  Here are some of Greenberg’s recollections from the prospect workouts leading up to the 1996 Draft…

Greenberg on who they brought in: To the best of my recollection we brought in the following 1st round prospects for workouts: Allen Iverson (2X’s); Kobe Bryant; Stephon Marbury; Marcus Camby and Ray Allen.  Of note is that we brought in an interesting prospect for later selection in Derek Fisher who I believed had a NBA future.  All of the players were impressive in their workouts.  They were individual workouts so they did not compete against anyone but there were a number of individual drills that required them to work intensely.

Greenberg On Marbury: Marbury gave tremendous effort in his workout and was obviously trying his best to be a strong candidate for the first pick which we owned.   At one point  in the middle of his workout he went to the side of the court and vomited on the floor.   He then paused for a moment, went to get some water to hydrate himself and came back to the court to continue working out.  Never missed a beat.  Can’t recall any problems with Marbury’s people… remember, we had the #1 pick so agents and players were pretty agreeable regarding meeting and working out.

Greenberg On Iverson: Allen had a good 1st workout and was for the most part the leading candidate to be picked #1.    After all the above named players worked out, I decided to bring Allen back for a 2nd workout just days before the draft.  I wanted to see if he would take it to another level as I was not sure he gave it “everything” in his first workout.   I spoke with his agent David Falk prior to that 2nd workout and explained we were leaning towards using the 1st pick on him but I wanted to see him give me his best effort.  To prove that he wanted to be the top pick.  And in his 2nd workout he indeed took it to another level compared to his 1st workout.

But aside from his workouts, his interviews were equally impressive and so were the comments from people who had coached him.  Aside from John Thompson, I spoke with Lon Kruger who had coached him on a US All Star team in an international competition.

One really memorable exchange took place during his visit when Maurice Cheeks and I spent time with Allen over dinner.   We began talking about a playoff series that was underway between the Seattle Supersonics and another team (I can’t recall who).  And in that series Gary Payton had battled an opposing guard and at times turned the game into a duel immediately going back at the guard he was matched up against when he got scored on.    And Maurice asked Allen what he would do if Payton scored on him.   Allen answered he would go right at him to score.   And Mo asked Allen, “well what if that wasn’t the best thing for your team?”  And you could see how it registered with Allen that Maurice was trying to explain to him the responsibility of a point guard to always be thinking what is best for the team.   It was a great moment to see the consummate point guard trying to give wisdom to a young player.  Allen may never have been the “point guard” in the mold of a Maurice Cheeks and in fact he was best utilized by Larry Brown as the natural scorer he was, perhaps the best small scorer the game has ever seen.  But I do believe that he always believed his efforts to score were in the best interest of the team and his ability to score was key to his teams winning chances.

Greenberg on Lower Merion high school phenom Kobe Bryant: Kobe had a very impressive workout and made a tremendous percentage of his shots during various shooting drills   Really remarkable for such a young player.  But the team had used the previous years lottery draft pick on Jerry Stackhouse and the club (Ed Snider and Pat Croce expressed the need to allow Stackhouse to develop) was committed to Jerry so as good as Kobe was, the combination of his age and the presence of Stackhouse eliminated him from consideration with the #1 pick.  To his credit, Gene Shue believed Kobe was special enough to consider him that high and I believe Tony DiLeo held a similar opinion.   I was not comfortable selecting him over Allen given our needs for an immediate jolt of adrenaline and the presence of Stackhouse on the roster.  I believed Allen was the toughest player in the draft and also the most difficult to guard.  And I believed he had the potential to be an immediate impact player for the club.  I remember once reading where Kobe was quoted as saying all we did was time him running the court.  That’s not true.

Greenberg on Draft Prospect workouts overall: And if memory serves me correct all the players reported in good shape.  The workouts were individual and included a lot of shooting, some timed drills to see players push themselves to make a certain number of shots from certain spots on the floor.  We didn’t have competition between players. We used the workouts & interviews to get a better feel for the players personalities, character etc…vs using them to evaluate their talent.  But obviously we wanted to also gather some information about their individual skill sets as well.   They were all impressive in their own right.  I am not just saying that to be diplomatically correct.  They were all impressive.  It was a heck of a draft!

Obviously, Greenberg, Croce and company got it right back in 1996.  That 76ers front office used these workouts, studied the game tapes, did their due diligence and then determined that Allen Iverson was the correct choice for the franchise at No. 1 overall.  As we all know, Iverson turned out to be the face of the franchise for 10+ years, led the 76ers to the 2001 NBA Finals and ended up in the Basketball Hall of Fame.

Lets hope the Colangelos (Bryan & Jerry) get it right at Draft17.