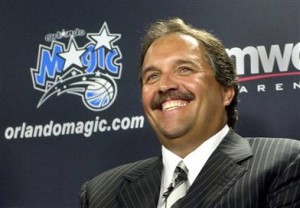 Stan Van Gundy is a clown. The manner in which he acted in response to Tony DiLeo’s comments on the refs Tuesday night was childish. After DiLeo rightfully called out the refs for both the elbow thrown by Dwight Howard and Howard’s tendency to stay underneath the basket for more than three seconds on both defense and offense, Van Gundy had this to say:

“Am I supposed to come up here and talk about the game? Or am I supposed to come up here and lobby for the calls I want the next game? Is that what it’s about now? We’re supposed to lobby for the calls we want the next game? Let’s just play the games. I guess that’s the only reason Dwight’s having success in this series. It has nothing to do with the fact that he’s good. We’re going to have the league look at Dwight’s elbow on Courtney Lee, too.”

This just shows you the type of coach that Van Gundy is. He starts being a hypocrite as soon as he comes on the podium. If he didn’t want to talk about the calls, than why even bring them up? He was definitely trying to send a message to the League offices or start something with DiLeo. Both are totally unprofessional.

Throughout the series, the Sixers have been called for numerous three second calls. My head count is around six, while the Magic have been called for two at the most. However the Magic have a player in Dwight Howard that not only doesn’t get called for offensive fouls, but constantly stands under the basket waiting for a pass inside on offense or for a player to drive on defense. The calls should at least come some what close to being balanced. I wouldn’t be as upset if the Magic for instance had around ten and the Sixers had six. Yet the two to six ratio right now does not sit well for me.

As for Van Gundy’s post game comments regarding Howard elbow shiver to Dalembert’s head, well they can only be classified as ridiculous defensive jokes by such a “classy” guy. All of Philadunkia Nation has a right to be upset for the non ejection in Game 5 because Van Gundy’s Magic savior in that game, Dwight Howard (24 pts, 24 rebs, 2 blks), should have been out of the game all together. If the NBA does not eject Howard for Game 6, than Philadelphia will be aiming for David Stern’s head. It was literally a game changing non-ejection, and it’s funny that ever since Howard fouled out in Game 2, the whistles have generally been silent on Superman. I wonder if it’s just a coincidence or is it a conspiracy?

But I digress. The real question here is how and why is a guy with the coaching track record of SVG taking sarcastic shots at Tony DiLeo? Let’s take a trip down memory lane to find out just how this man made it in coaching. His first head coaching job was at the University of Vermont, and then he moved over Castleton State College (VT) and on to University of Massachusetts Lowell, and finally one year at the helm of the University of Wisconsin. Along the way he compiled a 135-92 record during his eight year college head coaching career. Are you kidding me? That’s barely above .500 while coaching not exactly ACC level college ball.

Moving on, for some odd reason (most likely that his brother Jeff was the head coach for the Knicks at the time) the Heat organization hired Stan Van Gundy as an assistant coach to Pat Riley in 1995. If it weren’t for Pat Riley firing himself after the 2002-03 season to become the GM, than Van Gundy would have probably never been a head coach today.

Van Gundy in the 2003-04 season was blessed with MVP talent in his first year of coaching when the Heat drafted Dwyane Wade who Pat Riley drafted. The team finished the season 42-40 and nearly knocked off the top seeded Indiana Pacers in the playoffs. During the off-season Riley made yet another MVP type management move when he traded to get Shaquille O’Neal from the Lakers. With Shaq and Wade obviously you’re going to win, and especially during the East at that time. The Heat did and finished with a record of 59-23 in the 2004-05 season, yet in the playoffs they still ended up losing to the Detroit Pistons in the conference finals.

In the 2005-06 season the Heat started the season a disappointing 11-10 and Van Gundy was on the hot seat. Out of the blue Van Gundy announced that he was going to resign as coach in order to, “spend more time with family”, when really everybody in the basketball world knew that Riley and the Heat organization pushed him out so that Riley could be the head coach once again. That season the Heat finished 61-41 and won their first and only NBA championship. The organization would not be saying that if Stan Van Gundy were running the show.

By the time Van Gundy had spent enough time with his family, he wanted to break back into the coaching world and the Heat did not want him back. Van Gundy was not having much luck, until the whole Billy Donovan coaching debacle broke in Orlando. Billy Donovan as we all know accepted the job to coach for the Orlando Magic only to quit the next day realizing how much more work it requires being a coach in the NBA. The Magic were than in a frenzy afterward to find a coach with the NBA season only a few months away, and low and behold Van Gundy found a sucker. I love this quote from the Magic’s GM Otis Smith on the day they announced Van Gundy’s signing, because its like he was lying through his teeth:

“Stan Van Gundy enjoyed tremendous success during his tenure with the Heat. He has a great basketball mind, tremendous respect around the league and will get the most out of our players. Stan was sought-after by many teams this summer and we feel very proud to welcome him to the Magic family.”

Tremendous success? Tremendous respect? Sought-after by many? There are three lies right there. We all know that the Magic needed a coach really bad, and through dumb luck Van Gundy ended up being the man for the job. So who joined Van Gundy when he moved his butt only a few hundred miles from Miami to Orlando? Only the most dominant player in the NBA today, Dwight Howard, that’s who. Sure Van Gundy’s records of 52-30 in 2007-08 and 59-23 this season are impressive, but Dwight Howard is the reason he racked up all those wins.

For some reason, Van Gundy hasn’t had to coach a team without MVP caliber talent. He is pretty much the luckiest coach in the NBA right now. The other thing that is funny to me is that Van Gundy has coached two teams that pretty much already had the winning formula in place. The starting five that worked on the Heat was set for Van Gundy as soon as they got Shaq, and the starting five that works on the Magic was set before Van Gundy even coached one game. Outside of the switch to Courtney Lee over Mikael Pietrus at shooting guard, there has really not been any coaching adjustments that Van Gundy has had to make over the past two seasons. The switch to Rafer Alston at point guard this year is a given when Nelson went down, but other than that he’s just had to tell his team to play like they play.

Is it really hard to believe that Stan Van Gundy was thrown into the right place at the right time and that he isn’t really a good coach? For me it’s not a stretch at all. The way the Magic have faltered leads in this playoff series so far against the Sixers tells me that he hasn’t coached his team well. A well coached team has discipline, and the Orlando Magic do not. Even their head coach during a press conference doesn’t have discipline. If the Sixers don’t beat the Magic this series, than another team will. Talent can only get a team so far, it’s coaching that gets it over the top.

I thought a good way to end this story is with quotes by a couple players on Stan Van Gundy:

“The nature of our coach, he panics very often during games. He’s got some behavior which is not good for us. With his gestures he makes us nervous on the floor.”-Marcin Gortat

“As I fell, I realized that it was a flop and it reminded me of Coach Van Gundy’s whole coaching career. The one thing I despise is a frontrunner. First of all, none of his players like him. When it gets tough, he will become the master of panic like he did before and he will quit like he did before. Stan Van Gundy reminds me of a broke navigational system. He knows everything about everything but ain’t never been nowhere. Think about that. If I’m right here and I type in the address of where you’re going, I know where it’s at but I’m not going there. When the general panics, the troops will panic. Like in business, when the head panics and takes out all his stock, what happens? I’m not going to sit around and let nobodies take a shot at me and he is a nobody to me. And if he thinks he can get in a little press conference and take shots at me like I’m not going to (say) something back, he’s got another thing coming.”-Shaquille O’Neal

Here at Philadunkia, were not going to stand around and let you take shots at us either.