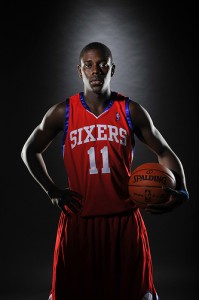 The 76ers have won two games in a row against very good NBA teams and one could argue that during those two victories the Sixers have played better basketball then at any other point in the 2009-10 season.

One reason behind the Sixers sudden display of solid basketball has been the play of rookie point guard Jrue Holiday.  Over the last two games, Holiday has been a tremendous floor leader and set the tone on defense while stuffing the stat sheet as well — 14 ppg., 9.5 apg., and 5 steals per night.

However, if you check the stats and talk to the other Sixer players you’ll soon learn that this is more then just a one or two week surge and that overall Holiday has been playing very well during the entire month of March.  To be honest, for us here at Philadunkia, Holiday has been one of the few bright spots for the Sixers in this train wreck of a season.  We’re not saying the 6-4 rookie is going to be the next Gary Payton, but in our opinion and those of some NBA scouts, Holiday is going to be really, really good very soon.  Which is good news for us and all Sixers fans who truly need a reason to believe that the future of this team will be better then the present.

Recently the rising face of the Sixers franchise gave Philadunkia a few minutes to discuss his game, Allen Iverson, the reasons the Sixers have struggled so badly this season and more. 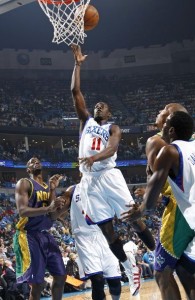 Philadunkia :  After one year at UCLA the scouting report on you was that you didn’t shoot well from outside.  Yet this year you are shooting 41% on 3PAs.  So were the scouts wrong or is shooting the outside jumper something you put in extra work on?

Holiday :  I would say it’s kind of both.  In college I could shoot, but I don’t think I got enough touches to shoot.  I was more of a three (at UCLA), Josh (Shipp) was the two-guard and Darren (Collison) was the one and they had the ball most of the time.  Really, it was about confidence. Not getting the ball last year, finally when I did get it, I was a little indecisive.  This year I get a lot more touches and I am playing point guard so I get a better feel and I am knocking down my shots.

Philadunkia :  One of the positives of your game that everyone talks about is how steady, calm and smooth you play.  How do you stay so composed out on the court?

Holiday :  It’s kind of my lifestyle.  People say it’s the “Cali-swag”.  I am more of a laid back, chill kind of guy in the first place.  When I get out there (on the court) I try not to be too antsy or nervous or anxious.  I try to play the full game composed, but I am not really sure where I get it from

Philadunkia :  You’ve been a starter for almost all of your basketball life.  So was it hard at the start of this season when you were seeing limited minutes or some nights no tick at all?

Holiday :  Most definitely.  I think it’s frustrating to any player who has come in to this League because before you were playing a lot of minutes, it doesn’t matter where, but you played a lot.  You were one of the best players on your team prior to the NBA, so it was frustrating.  Everybody was helping me get through it.  Louis and Willie were telling me to be patient and my time would come and when my time comes, to take advantage of it.

Philadunkia :  Did you think you should have been playing more early on this season or did you realize that it was part of the transition into the NBA that a lot of rookies experience?

Holiday :  I knew it was part of the NBA, but you still want that chance to prove yourself and to your teammates that you can play — even though you might be 19 and coming out after your freshman year — with the big boys.

Philadunkia :  Every NBA player remebers that “Welcome to the NBA moment” during their rookie season.  Have you experienced that feeling yet this season?

Holiday :  It was probably when we played Lebron the first time.  We played Cleveland in Cleveland and it was kind of like, ‘Man this is really Lebron James’.  To see him and Shaquille O’Neal on the same team, that was kind of intimidating.  For one, it was the biggest lineup I had ever seen and just seeing Lebron in person — how fast, quick and big – he’s like a cartoon character.  He’s one in a million. 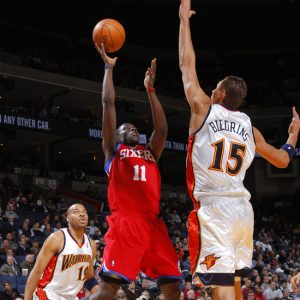 Philadunkia :  Obviously a huge event with the Sixers this year was the return of Allen Iverson.  What were your thoughts on his return?

Holiday :  The fans really love him, he made his career here.  Him coming back and helping us out I think really helped me as well.  I took a lot from him.  For one his mentality going into the game — how he is a competitor and is a warrior – never giving up even when we were down by a lot.  You really saw glimpses of how he used to play in person.  Especially me being 19 and being a Lakers fan, I remember the series in 2001 when the Lakers played the 76ers (2001 NBA Finals) and just rooting against him.  That was kind of surreal.  There was one point where on the sideline there was a kid who was wearing his jersey and I told him (Iverson), ‘That used to be me not to long ago.’  That was kind of cool.

Philadunkia :  What was your reaction to the reception Iverson received from the Philadelphia fans in that first game back?

Holiday :  It blew my mind, but I wasn’t really surprised.  I know how big of an All-Star Allen Iverson is, but I’ve never really seen anything like that, ever.  Just how crazy, how magnified the energy in the arena was just for one person.

Philadunkia :  You’re considered a very solid defensive player, but the Sixers as a team have struggled this year (15th in the League in team defense).  Is that frustrating for you personally?

Holiday :  It is.  I think it’s frustrating for the team too though.  I give it my all trying to guard the (opposing) point guard and trying to disrupt him and get him out of the offense or slow him down.  So when we don’t play defense well it is tough, it is frustrating.  As a team we really want to win.  It’s not like we’re just blowing off games.  Losing isn’t fun.

Philadunkia :  Obviously it’s been a tough season for the Sixers as a team. Can you put your finger on what went wrong this season?

Holiday :  Again I think its defense.  That’s one thing we’re still struggling with and we can’t really seem to figure out is how to defend certain teams.  Teams that have a forward who is tall and can shoot and ones that can drive to the basket.

Philadunkia :  You won a lot of games in high school and had a pretty successful one year at UCLA.  So how frustrating has the losing been for you this season?

Holiday :  I am just going out and playing hard everyday.  At first it does kind of get to you, but then coach talked to us.  The players have stayed positive, that’s really one of the big things.  It happens, you’re not going to have a great year every year and we have a new coach, a new system and we’re just trying to stay positive.

Philadunkia :  Your play since the All-Star break has been very solid. Is that because of the increase in minutes, something you’ve been working, film study, what?

Holiday :  I’ve really been working since the end of last year (last season at UCLA).  I never really stop working.  So it’s just working hard.  When everybody is asleep, I am up working, staying up late, getting up extra shots.  It pays off.

Holiday :  I think Tyreke is definitely one of the best guards in this draft.  I’m honored that David Thorpe wrote that about me, but we will have to wait and see.

Philadunkia :  People and “experts” are talking about you as the future of this franchise. Do you sense that and feel any pressure?

Holiday :  You know I do.  I think we have a really young team and I think they brought me in to run this team in the future.  Next year we’ll start off something new and comeback strong.

Philadunkia :  Give us one element of your game you’ll be working on this coming off season.

Holiday :  One element I’m going to be working on is my explosiveness.

Philadunkia :  Have you had much time to get out and experience Center City?

Holiday :  I’ve experienced the city a little bit.  I have gone and walked through the city, I’ve seen the Liberty Bell and the Rocky statue.

Philadunkia :  So how do you like Philadelphia so far?

Holiday :  I really like Philly, it’s different from Los Angeles but it’s a cool city.