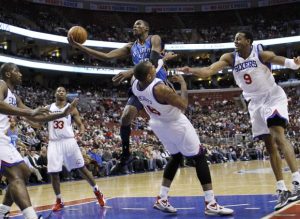 While there’s no doubt that KD was simply amazing (26 & 10) and made last night’s defeat very entertaining to watch, we’d argue that he had a ton of help in securing a W last night for the Thunder and ending the Sixers two-game winning streak.  The problem for us here at Philadunkia is that most of the help KD received came from the Sixers.

The Sixers put in a solid effort again last night as they did in their back-to-back wins over Milwaukee and Atlanta which kept this game competitive (for the most part) and exciting to watch, but in the end, the team still ended up with a loss.  So for NBA Lottery position stalkers like us here at Philadunkia it was a nearly perfect night.  However, the basketball purist in us can’t help but suggest that this game was there for the Sixers to win and that while Durant was very impressive last night, we believe the Sixers gift wrapped the W for the Thunder.  Here’s how Eddie Jordan’s team gave this one away…

If the Sixers could have cleaned up two or three of the ills on this list, they could have won the game last night down at the Wachovia Center.  On the other hand maybe the Sixers were lucky to only lose by eighteen points (111-93) last night, because if the Thunder’s Russell Westbrook is his usual self (3-12 from the field last night), the Sixers probably get a 30 point L hung on them.